Attitude Bears: Judging Your Next Trophy

by Jim Brennan
in Bowhunting Posts
0 0
A A
0 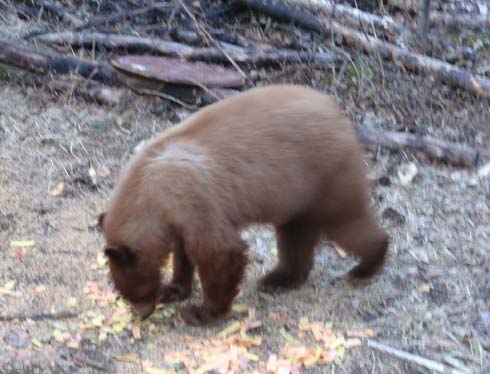 Judging bears for the average person can be a very difficult task. I have had the good fortune to hunt a lot of bears all over North America. Chasing them with spot and stalk tactics as well as hunting them over a bait are just a few of the more popular ways to hunt them.

A good number of hunters experience the worse ground shrinkage on any big game animal possible when they walk up to a bear that they have just taken. This can be averted for the most part by following these guidelines. Although they are no guarantee for you to put a tag on a true mature trophy bear it will help you narrow down shooting those smaller immature bears.

Everyone has read that you can look at a bear’s ears and if they have the appearance of a Mickey Mouse hat with large pronounced ears that this is an indication of a small bear. The ears can help no doubt but just remember that like people bears can have smaller ears or larger than others. What you want to look for is the location of the ears. Having them on the outer sides of the head are key and they should appear to look small in comparison to the head of the bear.

A crease in the middle of the skull running down towards the nose is also helpful and indicates a good bear. The weight of a bear is also over judged. Due to the long hair and round body and the fact that most people do not see a lot of bears they believe they weigh in much heavier than they do. The average bear taken all over North America is 150 to 175 pounds. 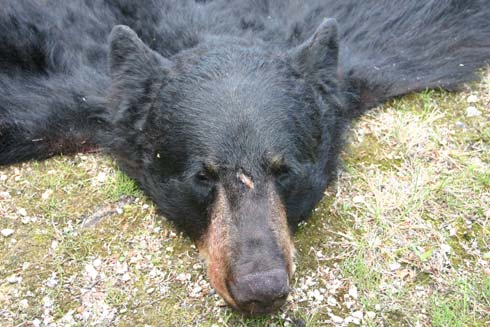 Shooting a bear over 250 pounds is not common. Depending on where you are hunting them and the Length that they are out of the den determines how long they can eat. It takes a good mature bear to weigh in over 300 and are very rare.

Using barrels for bait sites works very good as a judgement tool for the hunter. If a 55 gallon drum is in an upright position the back of the bear should come to the top third or even with the top of the barrel. This usually indicates a shooter bear. You can also look at the physical size of the bear. 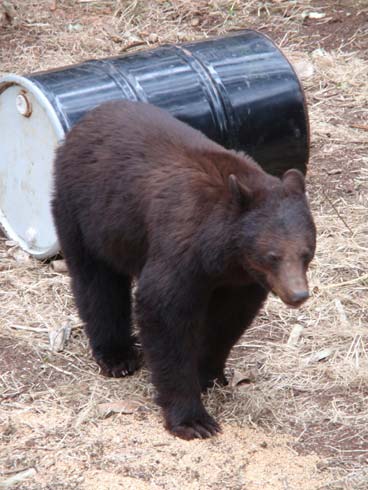 If you will have trouble fitting the bear into the barrel than it is a good bear to take. This way if the barrel is lying down you can use the “fit in the barrel” idea.

With all my experiences in hunting I have taken several bears that qualify for the record books but I use several other methods. I feel that these are more accurate and have helped me stay away from the shrunken bear syndrome.

My number one factor in determining if a bear is a good mature bear is attitude. If a bear comes in and is acting very shy, circling the bait and or running in and grabbing a snack and bolting this usually indicates a smaller immature bear. Stopping and starting in and out of the site as well as spooking off or running up the closest tree for no reason is also another clue. The bear should feel comfortable and not scared to death around a site. Smaller bears have to worry about being chased or even hurt by larger rival bears so they tend to be more skittish. 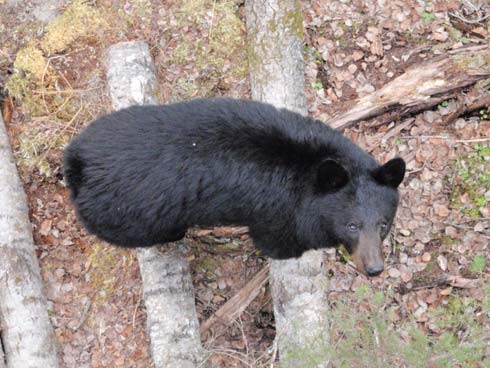 A bigger mature bear will walk into an area as if they owned it. They may look around and check out the area but they feel very relaxed while there. I have had big boars look right up at me in the tree and continue to walk right over and lay down to eat. They have very little fear and know that they are at the top of the food chain.

Another indicator I use is rubbing of the hide. In the Spring once they come out of hibernation they will start to rub off their old fur and prepare for a summer coat. Smaller bears almost always rub first. Their back sides and flanks will be rubbed as well as their feet. Larger bears tend to shed more than they do rub. I have seen bears in the end of June that had a good coat with no rubs but just thinner hair and they were larger bears. The hide is very important so take the time to look it over prior to shooting.

The front feet of a bear are different between boars and sows. The females tend to have a more pointed foot and it tapers in from the sides while a boar regardless of age will have a more square front foot. They also walk a bit different and boars have more of a wider walk. Their front feet come out and around to the front where sows walk more in line.

The size of the nose on a bear is also important to watch and how it appears on their head. A sow will have a more pointy tapered nose especially when viewed from the side. It is shaped like a funnel. A boar has the blocky thick nose and it appears to look like a pop can strapped to their head. It is more square and thicker. 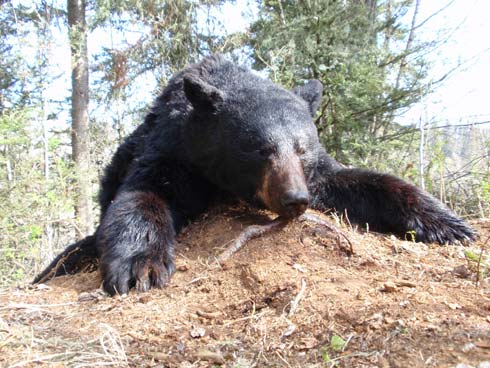 The actual body make up is also different between boars and sows. The females will have a smaller thinner front end, shoulders and neck than that of a boar. Their rear end will generally be taller than the front shoulders. On a boar you want to look for a solid body throughout and the back should be close to the same height from front to back. The neck and front shoulders will look more filled out and solid.

These are a good guide lines to get started. There are always exceptions to the rule but by in large they work very well. The next time you see a bear either on television or in the wild remember these helpful hints.   Stay down wind and hunt hard