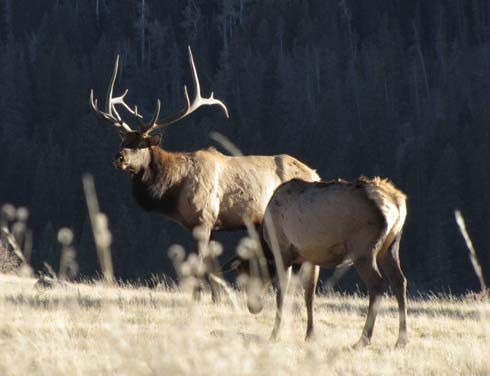 Colorado is a top state to bowhunt elk. The tags are not expensive and are over the counter. Private land cow tags are on an apply drawing.

On a recent speaking engagement in Colorado, I was able to mix in a little bowhunting. After all Colorado does have an overabundance of elk with about 1/3 of a million of the noisy creatures walking around. Actually, Colorado is not only #1 in elk numbers but it is about twice as busy with elk as the second state, Montana. My friend AJ set me up with a cowboy who owns a nearby ranch and helped me get an archery cow tag. I knew this would be fun.

I also knew that elk are no pushover. They travel in herds of up to 60 animals and 120 eyes would be challenging to get around. Plus, that’s a lot of noses. I also knew a bit about those elk eyes. You see they are a member of the Ungulate family and that means they share some vision characteristics with deer. They see in shades of yellow during the daytime and they can see UV brighteners in your camo. Blaze orange is always loaded with UV-brighteners.

To make it more challenging I had to wear blaze orange for the hunt. The only solution to this issue was to wear a UV-camo vest made by Atsko.com. The vest is created with UV dead cloth and it is camoed with a process called UV-counter shading. Problem solved. I treated my hat and camo with UV-KILLER and I was set on the sight issue. 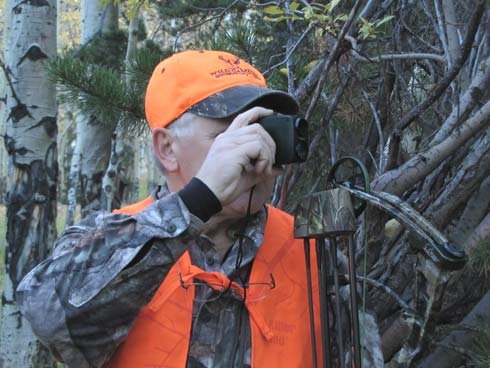 On the morning of the first day of my hunt AJ and I set up in beautiful grove of yellowing aspens. We’d been advised that a herd sometimes moved up this mountainside just after first light. For cover I selected a blowdown that offered a piney look and some heavily contrasted white and black aspen. The wind was blowing up the valley and the elk would have the wind at their backs. A risky scheme for and elk.

Unlike so many hunts I’ve been on when if the bell rings at all it is at 11:59, this hunt looked great from 30 minutes in. There in the distance I picked out dozens of cows moving slowly up through the shimmering yellow quakie meadow below me. This was already a good morning. I tucked into my hide as best I could and waited for what seemed like an hour.

Finally, my heart began to pick up speed as they drew closer. Then I noticed two satellite bulls off to the far side of the herd. All of the elk looked like they would pass me at 50+ yards. Although I can hold arrows on a pie plate at that distance, I had decided that 40-yards would be my maximum shot.

As they moved closer, I got my range finder busy and marked a tree at 40 yards. Now I froze and waited. About 20 cows moved past me at 40+ yards and not a single one spotted me. Lagging behind was 6-8 more cows and a big bull. In an answer to my prayer, a single cow strayed off my way at a steady walk.

She paused at 41 yards and glanced over her shoulder. Now I was pumped. I slowly began to draw my bow when I noticed that she was looking at the bull now under 40 yards from me and just behind her. Wow, I’d have to shoot in front of his face to kill her. Then he swung his eyes toward me and locked in.

Many new bowhunters freeze in situations when they are picked off and that’s a mistake. Rather, I let him see what it looks like when a bowhunter slowly draws his bow. He seemed very interested with a laser like look. Then I set my 40 right behind her shoulder and touched the shot off. The the Swhacker tipped arrow seemed not to slow down as it passed through and off into the tall grass behind her.

The cow had just won a free ride to Pennsylvania but she didn’t know it yet. She jumped into a fast walk and stopped at 20 yards to see what had just happened. That’s when the light went out. She tipped like a windblown cardboard cutout and the bull couldn’t believe his eyes. Knowing something just went wrong he sped up and disappeared into the Colorado morning like a mist.

Yes, Colorado had just lost one of its zillion elk but the rest are arrow-free and the prospect for elk hunting for you in Colorado is great.