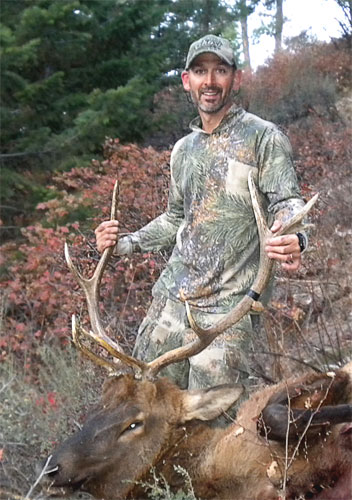 Author with his high country bull.

This morning began exactly like the last half a dozen mornings – early wakeup, lots of coffee and a cool breeze blowing in my face as I leave the truck under the cover of darkness. I wonder ‘Is it possible to get tired of hunting’? The answer comes as the cold air fills my lungs and I eventually lose my breath… ‘No way, I love this stuff’.

After a solid hour of hiking I reach ‘the wallow’, which is really what keeps me coming back to this (my favorite) spot. It seems to be more invaded with elk sign this year than normal which tells me that they are here – it’s just a matter of finding the right bull on the right day.

Darkness still envelopes me as I press on to my first spot, a place where I like to sit, glass and listen (good bow hunters do a LOT of all three). Once at the spot I have a little morning snack (jerky and Cliff bar) give a few calls and listen closely for any sounds of life. This morning seems so dead that I actually text my wife “Be home soon, nothing going on this morning… again”.

Just then I hear the snap of a twig followed by soft footsteps. After an hour of calling and waiting it seems my efforts were not in vain as I watch a nice 5×5 bull quietly sneaking in on me. He comes in so fast and straight that I barely have time to set up. Stopping at 5 – 7 yards, he looks right at me and knows something is wrong. Not liking the situation he spins around and trots off before I can even think about drawing my bow. With a breeze in my face, I know he’s not spooked and I think that I may see him again. It looks like instead of heading for home, I’ll be spending the day in the woods. One thing unique about that bull – he had a slight twist to his left antler and I was really hoping to have another chance at him.

My days in the elk woods are always made up of a series of ‘lessons’ – this lesson was to ALWAYS, ALWAYS be ready and don’t ever let your mind think that there are no elk where you are; especially when you see lots of elk sign. 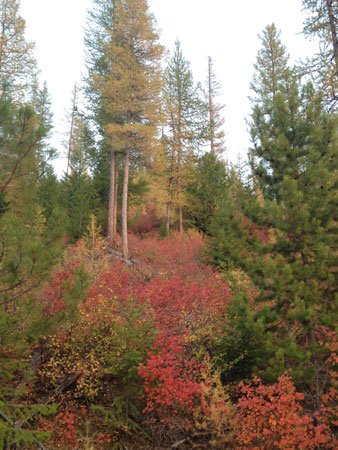 On opening day, I bumped into a young kid who had killed his first bull ever, way up this drainage above the clear-cuts and that’s the direction ole ‘Twisty’ went. Sure enough, when I got there a bull answers me right away with a shrill bugle. Working up through the dense thicket of Christmas trees I finally see the tips of his antlers and hear him working over a poor little tree. Usually this is a recipe for a blood-covered arrow as I have been able to walk up on bulls and kill them while they were so intently focused on the tree. This bull however, would rake once or twice and then look around very alertly – never giving me a chance to move in. I wondered if the presence of wolves in this Western Montana area has put him on edge. Finally he just got tired of the game and vanished into the black timber.

I was able to get on 2 more bulls up in that ‘Honey hole’ – the kid was right, this is where the bulls had been hanging out during the day. Elk sign was everywhere and it seemed like every other tree had a rub on it. After a dozen years of hunting this drainage there is always more to learn (even if it was from a young kid in his first year of hunting). Nap time for me, so I worked my way back to the spot where I had bumped into ‘Twisty’ that morning and zonked out under the warmth of the September sun.

After a nice nap in the elk woods I still had a couple of hours of daylight left so I start hunting my way out, cow calling and bugling as I went… nothing. As I worked my out I reached a point where I could either take the left or the right side of the drainage so I decided to go down the familiar left-hand side with the uphill thermals blowing in my face. Almost to the point where the hunting stops and the hiking starts I get an answer from a bull on the other side of the drainage. Pulling my Brunton Epoch’s out, I glassed the hillside and found several cows tended by a nice 5×5 bull.

Without spending much time to think about it, I took off down the steep ridge in a semi-controlled crash. I wanted to move quickly up the other side to slip in on the bull before it got too dark. Once in position and taking a few seconds to catch my breath, I let out a couple of soft cow calls. Bang! He hits me right away with a bugle and he’s close! A couple more cow calls and there he was, 25 yards in really thick brush leaving me no clear shot. As I tried to come up my next move he started raking  a tree and I knew that was my chance to move in.

Good thought but he doesn’t let me. Just like the bull earlier in the day, he rakes the tree a couple of times and then looks around alertly. He did this same routine over and over again. He wouldn’t come out of the thick stuff and I couldn’t move in. I was getting more frustrated as the light of day slowly bled away when he stepped out in hopes of finding another cow for his little herd. This gave me the split second opportunity I needed to get a shot. I brought my 70# PSE EVO to full draw and settled the pin. 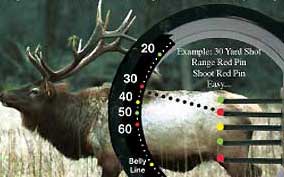 Now, I’ve been archery hunting for nearly 30 years and I think I can judge distance pretty well. But, with low light and poor visibility your eyes can play tricks on you. I would have bet you anything that he was 40ish yards away. To make sure, as I always do, I check my Dead-On Rangefinder conveniently mounted on my bow sight. It’s a simple little device that allows you to range animals in the field (even while you are at full draw). When I put the Dead-On over this bull, he is bigger than the 20 yard bracket, which tells me this bull is inside 20 yards (not the 40 I had thought). Once the Dead-On got me on track, I put my 20 yard pin on the kill zone and slam a Victory Armor Piercing arrow through both lungs.

Not knowing what just happened, the big bull walks only 20 yards and piles up. As I walked through the darkness to my trophy, I was thrilled to see that this one had a slight twist to his left antler and realized  my day had ended just like it should have begun.

For yardage accuracy in the field please go to: Dead-On Range Finder

The Last Ten Seconds of an Elephant Hunt