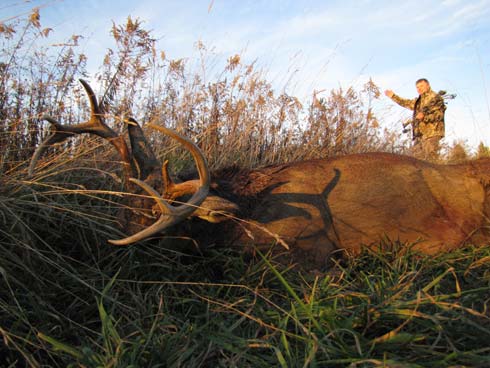 Use these 5 Steps and you increase your chances of finding your trophy.

Fail on the recovery part of your bowhunt and you lose. Across the years I have relied on five strategies that will always help you tag that whitetail after the shot.

1. Look. Keep your eyes on that deer until he is out of sight. This gives you a place to start looking for blood that is directional from your stand. Don’t just look but mentally mark a tree of bush or blow down that the deer passed as you lost sight of him. It is a great idea to pull out a compass and take a bearing. You’ll be surprised how the terrain changes once you get to ground level.

2. Listen. Hearing a buck crashing out in the distance is a key to finding him. Blood trails can be sketchy. Hearing the crash can give you a clue that seldom fails. Don’t stop listening just because you heard some big noise. He may have broken a branch during a death run and will crash and burn a few seconds later and maybe in a new direction.

3. Find the arrow. Find the blood trail and go slow. I just shot a doe two days ago on my Ohio farm. It was a donkey sized animal. A real honker of a doe. I made a perfect hit and watched her tip over at about 50-yards on her access trail. I’m telling you this because while looking for the arrow at the site of the shot, I found the arrow and a lung. Actually, it was a golf ball sized lung sample she left for a biopsy or something. Those Swhackers are lethal. www.swhacker.com

I like to mark the blood trail with a paper towel. Just tear off dime-sized pieces and drop them on every significant blood mark. This gives me a trail I can look back on and see a pattern of escape. It also helps me find the next spot if it thins out as I can draw a line of escape and look there.

4. Take note of where the deer arrived from as this is likely the route he will try to trace to escape. I almost always find deer dead on the trail they arrived on. Black bears over bait follow this rule too. My Ohio doe is a good example. There is a good reason for this. From a deer’s point of view, life was beautiful as they arrived. Then something went terribly wrong and they escape to the last safe spot they were in. This is most often their back trail. Even if you lose the blood trail, go back and check their arrival route.

5. Do circles as a strategy. Only one guy on the blood trail. Searching by party is a bad idea. If you lose the trail you may have to begin over. The trail can be ruined by too many trackers. If you do lose it, go to the last blood and start by doing circles radiating out from there. The deer may have turned and leaped. By doing ever widening concentric circles, you will have to intersect any sign that is there. Go slowly. If it is dark, go back at first light. Be vigilant and do not give up easily.

# Bonus tip – If you lose the trail after it had been going along in a relatively straight line I have a strategy you may employ. As an escaping hit deer dies, it may pass into a hazy consciousness before it falls. Often at this time, the deer panics and looses orientation as it jumps a few times before crashing for good. This means it may be at 90-dergees to its path of travel and 30 feet or so off to one side.. dead.

Back To My Bear Roots

A Roll of the Dice