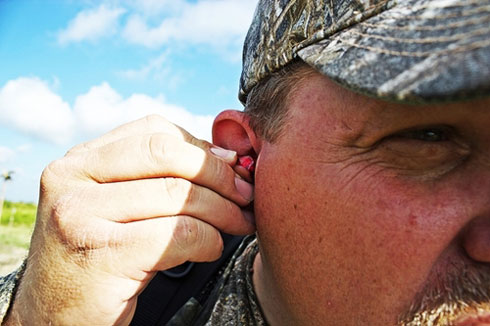 a nice snug fit and it's working.

As tinnitus sufferer, compliments of the U.S. Marine Corps, and avid hunter, hearing has been a significant hindrance to my success in the field. While many count on hearing, sight and smell on the hunt, I have lost much of the second most critical sense we carry into the woods.

So, what’s a frustrated hunter to do? I had heard great things about the quality and customer service at WildEar so I picked up the phone and ordered the Master Series Hearing Enhancement System (HES). What a Godsend! Brad Esson sent me an information and fitting instruction kit and I scheduled an appointment with my local audiologist. I left the audiologist’s office with impressions in hand and mailed them back to WildEar. Within two weeks I had a package waiting at my front door.

What’s in the Box?

Upon opening the shipping box I found a beautifully crafted wood box with my name carved into the lid; I was immediately impressed! Opening the box I found every component neatly displayed including my WildEar Hearing Enhancement Devices (HED), a WildEar adjustable lanyard, extra plugs, a cleaning brush, identification card, extra size 13 batteries, instruction manual and an extremely nice leather carrying pouch.

Success, One Ear at a Time!

A major benefit to WildEar’s HES is adjustability. This is the first system I’ve had the pleasure of using that incorporates comprehensive adjustability. WildEar HED’s offer four presets and numerous volume levels to optimize hearing FOR EACH EAR! Using the various presets and volume levels I quickly achieved optimum hearing; in fact, after customizing the settings and recording them on a piece of paper (I now keep folded in the leather pouch for reference) the variance in hearing from one ear to the other I had experienced for years became negligible.

From Every Direction or the Right Direction?

Another benefit was the ability to discern noise direction. Experimenting with other devices I noticed difficulty in ascertaining which direction noises were coming from. Using WildEar’s HED’s I had no problem identifying the source direction of various sounds; a critical element to hearing in the woods! In a matter of minutes I had leveled my outdoor playing field with a keen hearing ability I presume rivals that of my prey.

Hearing to Hearing Protection: From A – Z!

My Master Series HED’s were designed for a diverse range of outdoor activities including both firearm shooting and bowhunting. When rifle or pistol hunting, or during a day on the shooting range, I simply insert the vent plugs into the vent holes. The plugs seal the vent holes preventing outside noise from entering the devices. Noise is suppressed when it reaches a potentially dangerous level. My HED’s only suppressed the firearm blast then returned to hearing amplification.

While bowhunting I remove the plugs. The open vent holes allow for natural noise and air to infiltrate, eliminating any semblance of feeling “plugged up”. It’s worth noting that at any time you transition from bowhunting to shooting a firearm you must remember to install the vent plugs!

I never realized how much I was missing the field. WildEar HED’s gave me a new lease on my bowhunting life. Now I used them for more than outdoor pursuits. Late in the evening you can now find me watching a couple of my favorite television shows… without subtitles!

The quality of workmanship was readily apparent and proven through use. WildEar accounted for every minute detail. The presentation of the product in the customized box seemed to demonstrate just how much WildEar focuses on satisfying customers; I felt like I was important to them. WIldEar has earned my trust, endorsement and recommendation. Well done, WildEar, well done!

The only con I observed is the inability to power off the devices without removing the batteries. A power button on each device would be a great addition; handling batteries while 20 feet up in a treestand can be frustrating. Considering that minor inconvenience, WildEar still earns top honors with me. I expect my WildEar HED’s will be an important part of my outdoor gear for years to come!

Many thanks to WildEar for offering premium, dependable and diverse HED’s at prices most bowhunters who take their hearing seriously can afford!

Check out WildEar’s array of premium hearing enhancement and suppression products at www.WildEar.com.

Kim is Dead-On to Take Three and Counting