by Marc Anthony
in Bowhunting Posts
0 0
A A
0 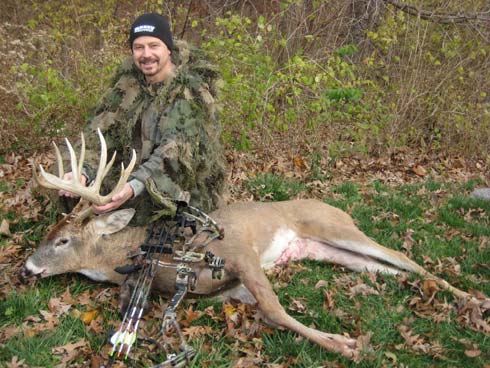 A slight change in tactics resulted in this nice 166" trophy.

Chalk up another strange whitetail season here in Illinois. With our diminishing deer herds (whether it be from the IDNR’s admitted deer reduction plan or EHD), the deer in many parts of the state just didn’t want to come out to play. From time to time, you’ll hear one of us Illinoisans complain about the conditions here mainly because we were around long enough to once enjoy these creatures in abundance.

The deer quantities seem to be more of a localized problem in some parts of the state, which is why some of us go off on a rampage for the state to remove the “one plan fits all” strategy and to create a more specific plan for areas that have special needs. With all of that said, we really don’t expect anything to happen because after all, we’re still dealing with a government agency and one from Illinois! So what does an avid whitetail hunter have to do in order to become a successful whitetail hunter each season? For starters, we have to hunt the odds if we are striving for that feeling of elation that comes from a well executed hunt.

Yes, my little rant above makes me feel better but bringing home the venison (with enough bone on its head) is a better solution. For me to achieve that, I hunt the odds. Let’s face it, whitetails go through a series of changes from October through December here in the Midwest and those changes are just weeks apart. Early October, deer are still in their feeding routine and toward the latter part of the month, they’re morphing into fighting machines. A few weeks later, mating drives them insane and from there, it’s back to being Jethro Bodine and eating sometimes the equivalent of a whole box of Cornflakes in just one sitting. So does one strategy fit all? I think not.

It’s customary for many areas of the country to have unpressured action at the beginning of the bow season but for some reason, 2-3 weeks into the season, the deer seem to disappear into nowhere. This disappearing act is sometimes known as the October lull period. This period is nothing more than a transition period for the whitetail where the buck becomes more of a testosterone filled teenager rather a young boy out for dinner. Add into the equation that does are now starting to move into areas bucks once bedded, (but aren’t ready for mating) and you’ll quickly understand why the disappearing act happens so abruptly. So instead of hunting in the same spot you have been for the last 2 weeks (over corn fields), it’s time to reduce the odds of getting skunked and relocate deeper into the timber. By relocating, the does will still be able to feed in a timely manner but your bucks that are breaking away from their bachelor groups, are going to be in motion and traveling to find safer and less bothersome places to live for the next week or so. So in essence, even though it appears you’re seeing less activity over feeding areas, the bucks are really moving all over the place deeper in the woods and doing it more in the middle of the day!

This year was no different. After 2 weeks of moderate activity, the action came to a complete halt. That was my first indication that the lull period was kicking in. On October 23rd, I found a break in my hectic schedule and took advantage of a late morning gap and went hunting. I arrived in the timber at 10:00am. and had arrowed this nice ten point 170” typical shooting  my Bear Carnage at 11:10am.

It was a text book hunt under text book type lull conditions. I had success like this in the past but like all hunting scenarios, have also been skunked too! Bottom line: I reduced the odds and it worked in my favor.

When the rut finally kicked in, I changed strategies and went after a 200+” non typical I’ve been chasing for 2 years but after I found out he busted his rack, I pulled away from him and his home area (with hopes of getting him next year) and hunted another bruiser.

Being toward the end of the rut, I tried to time what we call the “second rut” based on 28 days after the peak rut here in Illinois and found myself glassing a 160+” bad boy with his girl friend after 3 days of pursuit. My strategy was to hunt him just outside of his bedding area and on the 4th day, it paid off when I sent him a Muzzy 125 grain MX-3 via airmail through the boiler room. From here, it’s back to food sources for the rest of the season.

I’m not one who gambles a lot, so I don’t like playing roulette with whitetails. Sure, you can pick a spot or have a favorite stand to sit in day after day, but if it’s action you would rather see, it’s time to hunt the calendar where you live! Reduce the odds of failure and increase the odds of success. Hunt the animal according to his chronological attitude and put your cognitive skills to the test as there is no other game animal out there, in my opinion, which will test your nerves more than the monster buck.

SPECIAL THANKS:  I tested the HECS suit this season on both bucks by wearing it under my “Marc Anthony” Bow Hunter Ghillie Suit. The HECS, along with products by Trophy Ridge, Bear Archery, Muzzy, Goat Tuff, Arizona E-Z Fletch, Carbon Synergy, Vortex, Carl Zeiss,  Watson Air-Lock  and several others, all made these successful hunts possible. A special thanks to these manufacturers who have been along side me through this season!

Be sure to follow Marc at: www.marcanthonyoutdoors.com . and see his product reviews at: Marc Anthony