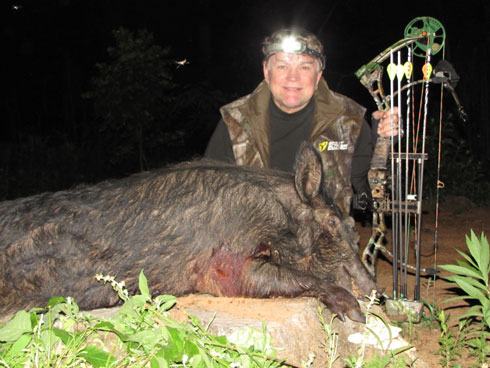 This is a hog wait waiting for. I like those short recovery episodes.

I’ve planned dozens of expeditions. Some in Africa’s Kalahari Desert wilderness and some in Alaska’s arctic. They all have one common denominator. They each involved a thought-out plan. Go with no plan and you never meet your goals. The same holds true for pursuing my favorite recreational bow target…feral hogs. If you want to see more hogs, your hunt plan has to check a variety of boxes.

After arrowing dozens of these porkers, I have a list of conditions that must be met to see broadheads meet meat. They are location, location and strategy. Let me explain. Feral hogs have now spread across the entire south and are reaching alarming numbers along North America’s southern seaboard. From Florida to Texas you can find these invaders in good numbers if the location your hunting in is prime. Not just anywhere in the south will do.

These pigs are eating machines. Although they can thrive in America’s native swamps that prefer to raid farmer fields. Some of the best hunting is adjacent to agriculture. If you can access private land you have won but it is often difficult to gain permission if you’re not a local. That leaves you searching for a managed hunting operation. Here is where location begins to matter.

If you find a hunting operation that hunts hogs as and incidental add-on, its often poor hunting. Here is why. If deer hunters are banging away at hogs from their deer stands from October first to January 31 you’re hunting a hammered bunch of hogs. They often go nocturnal more quickly than the local deer. This is especially true of a rifle hunting operation.

If you find a ranch where they host a dozen rifle hunters a week, even if they are exclusively hog hunting you’ll find the same thing. The hogs are hammered and daylight-shy. Let’s say some ranch is hunting 1000 acres of Texas brush country or Florida swamp. There may be 200 resident hogs on that ranch but add in the center-fire group and your numbers will dwindle fast. Pressure them across 6 months and you’re looking at survivors that are piglets that range from the size of a Kleenex box to 60 pounds. The adults are quickly picked off.

When I’m hunting moose, elk, bears or whitetails I demand a fair chase hunt. When I’m arrowing hogs I like a managed operation. I’m there to shoot arrows and stock my freezer. I discovered such a winning operation in Eastern Texas last spring. I prefer Eastern Texas because it is wetter than the rest of Texas and the ground cover resembles my Ohio farm. It’s as thick as dog hair. Lots of agriculture and not many hunting operations.

I felt like I’d chosen a winner when I discovered that the lead guide and owner was a sold-out bowhunter. Unlike so many Texas operations where they remodeled the chicken coop to make the lodge, these guys had built new comfy cabins and a great modern lodge. I even liked the idea that I could cook my own meals in a modern kitchen and reduce the cost of the hunt. But what about the porkers?

The manager, David helped me get unloaded and immediately insisted he show me the ranch. We jumped into a new buggy and began to weave our way through the rolling terrain and thickets. I consider myself a pro on set-ups for whitetails. There are at least three reasons why a stand or blind goes in a specific location or I don’t put it there.

Without prompting, David began to tell me why the first blind was set on the edge of a ravine, explaining the nearby water, prevailing wind and sun angle. He had the feeder a full 20 yards away, so the hogs wouldn’t be under foot as their noses are amazing. He had even considered arrival route of the hunter so I wouldn’t have to be walking around or past the feeder of feeder trails. Every blind was monitored by a trail camera. He knew what was hot and not.

Then he showed me the natural feed in a swale and the post oaks above but it was the Real Bark blind that got my real attention. Sitting in the shadows was an amazing blind that checked all of the boxes. I’m picky about blinds as I’ve been carried to marginal faded “tents” that were half collapsed, had windows that didn’t work and sat on a bucket for 4 hours. Not this operation and not this blind. 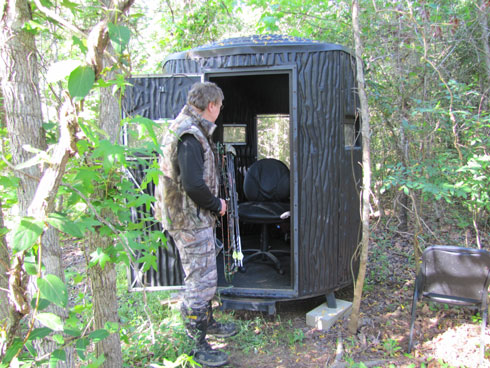 It was made of black textured poly and set up on a low platform. The blind is an efficient round shape and shooting windows everywhere. The windows were quiet glass sliders and swingers that open up a variety of shooting angles. In addition, they had shoot-through screens that were camouflaged and concealed the shooter, even from a few feet away. The floor was silenced by carpet and the seat was an office chair on rollers… as comfortable as the one I’m sitting in as I write this. I could see 270-degrees without moving. Quiet scent containment was the strategy. All blinds were the same. Great locations and the same high quality blinds. I’m buying one of these blinds for my whitetail property. Check em’ out at www.realbark.com

After a big lunch, Dave took me to a blind with my bow. We spotted some small pigs on the way. I got in that big chair full of optimism. This fact is important. I was optimistic. This makes you a better hunter. An hour later the feeder went off and woke me up like a fire alarm. Eating a big lunch and sitting quietly in a blind always puts me to sleep. I should probably drink a Red Bull as soon as I get comfortable.

Regardless 20 minutes later, I had porkers filtering through the dense underbrush. They got to the corn and were as busy as a bunch of turkeys. Twisting and jockeying for position so they could get that shiny kernel of corn. I drew and picked out a sideways victim and launched and arrow. I wish I could tell you what went wrong but my arrow missed the oinker completely. I can stay on a pie plate back to 50 yards and this was a 20-yard gimmie. Oh well, at least there are lots of hogs in this property.

The next morning David carried me to another great blind location. Here I saw a real winner. He must have been wind checking for hot sows because he didn’t even slow down and corn wasn’t what he was looking for. Another pack of hogs moved in on the feed but they weren’t big enough for my expectations. I’d hunted 5 hours and had seen 28 hogs. The evening hunt proved to be more productive.
I got settled in yet another blind. David explained the lay of the land around the blind and the reason why it was placed there. There was a big wet ravine to the north and a wet spot on a bench feeding the dense bottom. He expected that the hogs would approach my blind from that ravine. Right after the corn alarm went off the brush at the crest of the ravine began to shake as a dozen or so multi-colored feral hogs closed in. 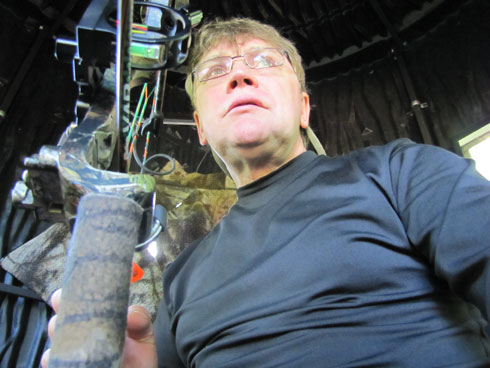 I mentioned in the beginning that I had a personal strategy for hog hunting and although I was in a scent tight blind one part of my strategy is to go over the top concerning scent suppression. I use Atsko products exclusively. Sport-Wash for my clothes. Hair and body soap for showering and N-O-DOR spray (an oxidizer) for my skin and gear. All of their scent suppression stuff is scientific as is their entire staff. I like science.

My second strategy for hogs is to lay them down quickly. That means using a big effective broadhead that will get me a pass-through. I haven’t bought into the celebrity driven mechanicals that open on contact and thus loose 50% of their penetration making an entrance hole. I prefer a mechanical that manages kinetic energy by making a one-inch entrance hole and then opens up to a full two-inches inside where the vitals are. Then it makes a giant exit hole. I use Swhackers. I haven’t lost an animal in two years. I like dependable.

Well those pigs moved around the corn as if they were playing musical chairs until one big black one gave me a moving broadside shot. The arrow thumped him and I was pleased to hear the accompanying ‘I just got shot’ grunt as he blasted off toward the ravine. David commented on the recovery that he would have to wash his pants as the brute was leaking all over the brush on his short escape. He didn’t make it 20 yards.

If you are considering a hog bowhunt and you’re undecided on location, location and strategy you may want to check out Seymore Outfitters in Alto Texas. It may be the best hog hunting in East Texas.