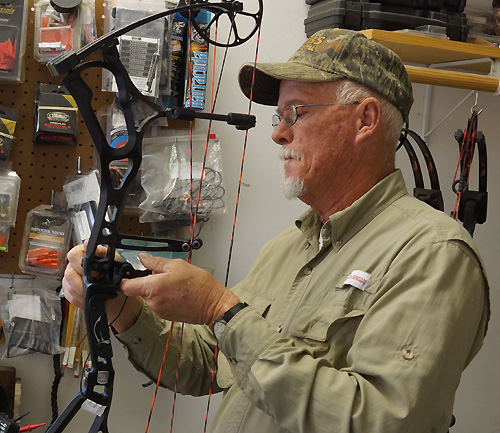 I was hunting deer when the UPS driver left my packages from Bear Archery on my side porch, but I noticed them right away when I came in from the stand. 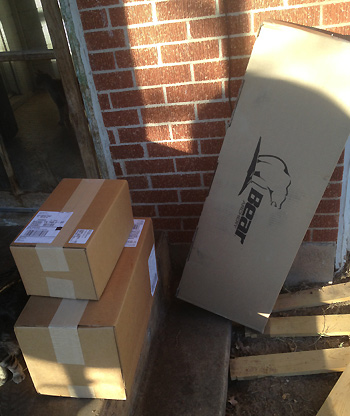 I brought them in the house and called my friend Jim Mitchell and asked if I could bring the bow, etc. over to get it set up. Jim said, “Come on” and I drove to his ranch an hour away. Jim greeted me as well as his friend Gene Curry.

Jim Mitchell is a Pro shooter and former Director of the ASA western division and a buddy of mine for over many years. Gene Curry is one of the top Pro competitive archers in the country with World Championships to his credit. Both of these guys can make a bow “do all that they can do.”

Gene took my bow out of the box. A new 2013 Empire from Bear Archery in a Shadow finish.

First Gene adjusted the poundage for me and checked the draw length to be sure it was ok. It was.

The arrow rest was a Trophy Ridge innovation, the Revolution. This arrow rest incorporates both of the technologies that changed recent archery, it is a Full Containment rest and a Drop Away rest.

Here is a picture I borrowed from the Bear web site. It shows the shaft and the containment arms. 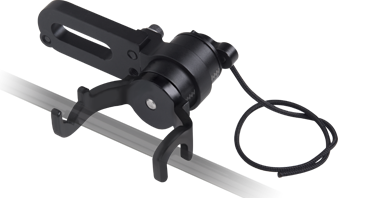 The bowsight in the box was the Cypher 3 from Trophy Ridge. It is made from a Ballistix CoPolymer and is stated to be as strong as aluminum but 25% lighter. After Gene set up the bow and I shot it I became familiar with the sight’s  Tool-less Windage and Elevation Adjustment. I’ve never used a sight that was so easy to adjust.

A Rheostat Sight Light is included and that is a big plus to me because I hunt from a ground blind a lot and the extra light for the sight pins makes a big difference inside a dark blind.

Gene Curry put the bow in his bow press and made make special adjustments. Secret stuff that makes his beat the pants off his competition on archery ranges all over the U.S. I had a favorite peepsight, the Whisper Peep with tubing. Gene installed it on the bow. 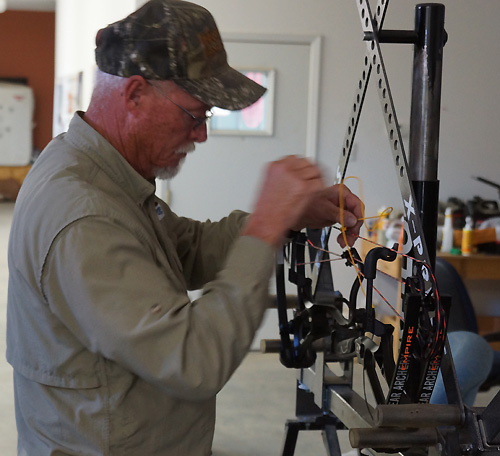 Soon he was ready to paper tune the bow. I’ve done this before and it takes me plenty of shots and there’s lots of arrow rest adjustments to get it right. Gene drew my bow and took a shot through the Paper Tuning machine. 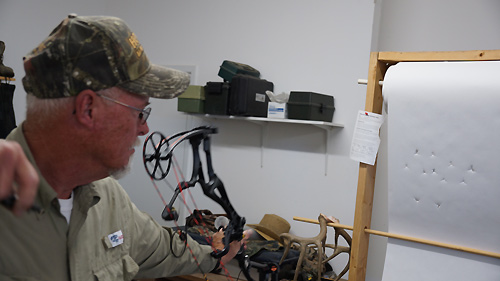 The arrow had a rough tear to the right.

Gene examined the tear and adjusted the bow. He took a second shot, to the right of the first shot.

Perfect. Wow, in one adjustment Gene nailed the paper tune.

Next up was the bowquiver. I had asked for the Beacon bowquiver. Back during turkey season Timm Getts hunted with me and he had a Beacon on his Bear Attack. It had unique features I really liked. The hood has 3 powerful green LED lights encased in the top. So the quiver was a flashlight on the way to the stand as well as super for getting setup inside a blind. And there is no fumbling around for your flashlight or forgetting it because you definitely have your bow.

A 4th light is inside the hood and it shines on the quiver’s mounting brackets as well as your arrows. And as you may or may not know, game does not notice the light from a green LED. I found a picture on the Bear web site that shows the location of the green LED lights. 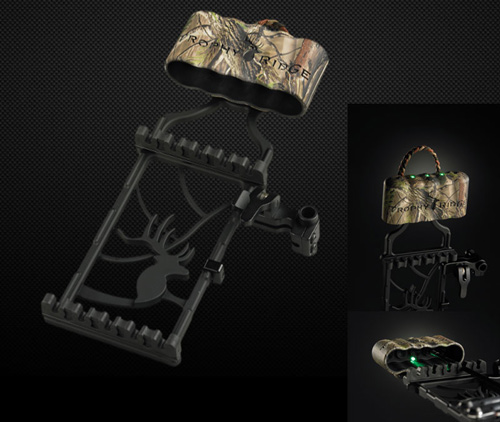 Gene put the Beacon on my bow and we took a break for lunch at a place called the Red Wagon. Here we are at the place. The food was very good.

Gene had stuff to do so he went on. Jim and I returned to his ranch and went to his archery range to see how this bow and setup shot. I started out at 10 yards.

My first shot was 10 inches high but right over the bulls eye. Mitchell told me to shoot three more arrows. They grouped together, high above the bull.

Jim took the bow to adjust the bowsight. He commented on how easy it was to adjust the windage and elevation and showed me how the adjustments work. We’re talking no tools here. Very nice.

In two adjustments Jim had me on the money. So I shot some more and then backed up to 15 and 20 yards. The arrows were right in there. I was good to go.

The next morning I was in the ground blind by the H2O Seep and had my new Bear Empire. Here is a picture of it inside the blind. 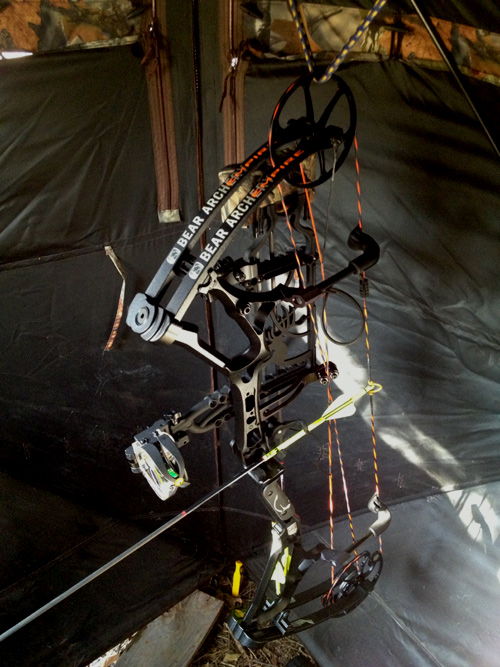 I’m ready to go. My game cameras show that a particular big 9-point is working scrapes and has come to the H2O area when I wasn’t there. Me and my new Bear Empire are looking for an encounter.