The Last Ten Seconds of an Elephant Hunt 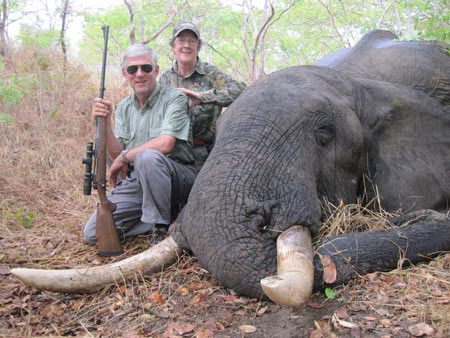 Larry and Brenda Potterfield after an elephant hunt

It had been a long and impossible track, interrupted by the wind, the rain and a group of females; but we had seen him for a few seconds, just 20 minutes into the track, and knew this was a bull we couldn’t give up on.

Twice during the morning we had lost his track; then, quite by accident, we found it again — and shortly we were on him.

There were seven of us on the track, three trackers in the front, then the professional hunter (PH), myself, Brenda and finally the game scout. We were walking slowly but deliberately through light brush, on dry grass and leaves — about two or three steps apart.

Unknown to any of us, the bull had turned sharply off his line a few yards in front of us, walked slightly up hill and was standing in sight and sound of our small group.

We were making way too much noise when the number three tracker spotted him. Now begins the last ten seconds of our elephant hunt.

All three trackers hurriedly collapsed back down the line, as the PH and I moved forward to the front; the second tracker handed off my rifle as he went by – four seconds.

My first responsibility, as the hunter, was to check the scope levers, the scope power and the safety – two seconds; then I looked for the bull, knowing only that he was to our left.

There he was, broadside at 40 yards, slightly uphill through the brush, head up, and very nervous. The PH said “shoot him now!” I took another step forward to clear some brush and brought my gun into position, thinking about bullet placement, the shoulder or the brain – two seconds. But, immediately he charged.

It was pure instinct; shoot for the brain — cross hairs between the eyes, keep the barrel moving and pull the trigger. At 25 yards, the bull and the Hornady 375 solid met head on – two seconds. His front legs collapsed and he slid the full length of his body – game over.

So that was the last ten seconds of our elephant hunt.

About MidwayUSA
Larry and Brenda Potterfield turned their passion for shooting sports into a career in 1977 by opening a small retail firearms store that would eventually become MidwayUSA (http://www.midwayusa.com).  Now celebrating its 35th Anniversary, MidwayUSA continues to offer Just About Everything® for Shooting, Reloading, Gunsmithing and Hunting while maintaining the company’s #1 goal of Customer Satisfaction.