A Video Showing Our Roots 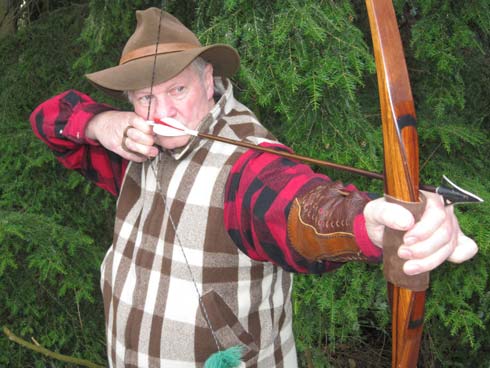 When I was a kid my brothers and I would take our Bear Grizzly bows and hit the woods. We’d shoot at stumps, chipmunks and during the hunting season, squirrels and rabbits were not safe. It wasn’t about the kill. It was about having fun shooting bows, competing with each other relative to who could make the best shot on a leaf at twenty yards, etc. We were a bit hard on arrows so we learned to fletch and repair our own. Money was tight so if we wanted to shoot, we had to repair our own arrows.

At age ten we followed dad around when he bowhunted. At age twelve we again followed dad but this time we had bows. Tree stands weren’t around then so we crazily climbed trees to bowhunt. Nothing very dangerous but by today’s standards, it was a bit foolish. But it was what it was. Remember now, this was sixty years ago. We also made our own ground blinds, watched the wind as we do today and every once in awhile, we took a deer.

Each hunt was an adventure, a real adventure. Just being out there and seeing deer (deer weren’t common where we lived way back when) was an adventure. I remember the first day of gun season in Pennsylvania sitting in a ground blind I’d made the week before, bow in hand and having a doe walk within three feet of me. Not in season but a memory that is still vivid after all these years.

Then there was a gray squirrel with a partially white tail that hopped by me on a freezing cold day in bow season in Pennsylvania. And a hummingbird that perched on an arrow as I sat on a limb in an old apple tree waiting for a buck that I’d seen there several times.

My dad was one of the founders of the Flood City Bowmen in Johnstown, Pennsylvania and they had (and still have) this great outdoor range where my brothers and friends would go shoot our recurves. One really cold day over the Christmas holidays Wally Penrod, an old friend and my brothers and I decided to hit the snow and shoot at the club range. Target #13 was an 80,70,60, 50 yard four-shot target and I nailed it each time. What fun.

And that brings me to the history and fun I saw in this bowhunting, bowshooting video. “Pure Bowhunting” describes archery in an honest, down-to-earth way. Three bowhunting friends hit the woods to do some stump shooting and you can tell by the film that they’ve done this for years. It is just pure fun. The fact that they are using recurves and longbows is, in part, a function of their age but also a function of their love of archery. Steve Gorr has been building recurves and longbows for a living for many, many years so it is no surprise that his hunting and shooting companions also use the same.

Many of the bowhunting scenes come from Washington. Washington is a great bowhunting state; a hidden gem that we don’t hear much about. But they have some great bowhunting for a number of species. Blacktails, whitetails, black bear, mountain goats and two species of elk. There are nine successful bowhunts on this video but a lot of other bowhunting that covers these species plus hunts in British Columbia, Alaska and Africa as well.

It’s the style of these hunts that is quite a bit different than what we are used to seeing on many of the popular television hunting shows. Not a lot of tree stand hunts in this video. No trail cams here. The big bucks don’t have names in this video. Rather these guys do a lot of spot and stalk bowhunts as well as ground blind hunts using natural ground blinds. Nothing in this video is a put-down on bowhunting today and please do not misread my comments. I am not slamming the bowhunting of today. What this video depicts are great bowhunts, great camaraderie, good ethics and some super photography of wildlife and the hunts themselves.

For fun, Steve throws in footage of kids shooting aerial targets etc. Reminds me of my youth and a great reminder of how we got to where we are today. Yepper, history is important. It is always important to know about and remember our roots. If you can do this and have fun at the same time, all the better. That’s why you will love this video.