“Behind The House“ Whitetail 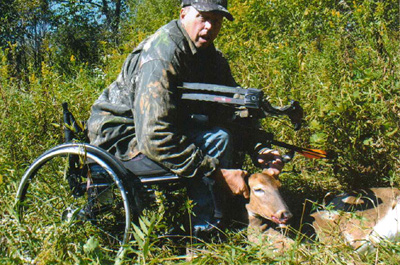 It was one of those days where not much was going on so I decided that a Friday afternoon bow hunt was in order. I had missed the Minnesota bow opener due to an African hunt so this was going to be my maiden voyage.

I set up a ground blind up two weeks prior to give the deer a chance to get used to it. The neat thing about this place is it is only about 250 yards from my house.

When the time came I grabbed my bow, arrows, and my bag and got into the electric wheelchair to make the short trip to the ground blind. Before getting in, I sprayed myself with Dead Down Wind Evolve Field Spray and took a shot of DDW Breath Spray. I raised the blind up and rolled in.

Once inside I got myself into position, got the items I needed out of the bag, cocked the crossbow, loaded an arrow and sat back and watched nature put on her show. It was very quiet with no wind so it was easy to hear something moving. Not much happened the first hour but as the sun was going down the usual forest critters started coming alive. There were squirrels and chipmunks along with many kinds of birds to help break up the boredom and keep me entertained.

As the sun was going down with about 15 minutes of legal light left I heard something moving on my left. I brought the binoculars up and saw a doe moving in my direction. If she would stay on course she would pass by me at 25 yards.

I had already ranged several landmarks so if she eventually passed by one I’d know the range to shoot. I quietly picked up my Barnett Crossbow and got ready for the shot, if I got one.

When the doe stepped into the shooting lane I launched the Rage tipped broadhead. The shot felt good and I heard the loud “smack” of a good hit.

I packed up my gear and went back to the house and called my son. Not being able to track the deer myself, I needed some help. About an hour later my son Justin and a friend got to my house. We went out to the blind and I focused their attention to the area of the shot.

It was a clean pass- through and they found the arrow covered with bright, red blood. Looking at the arrow and the blood trail we could tell it was a double lung hit and the tracking should be short lived. There was not a lot of blood but they managed to stay on the trail and found my prize. 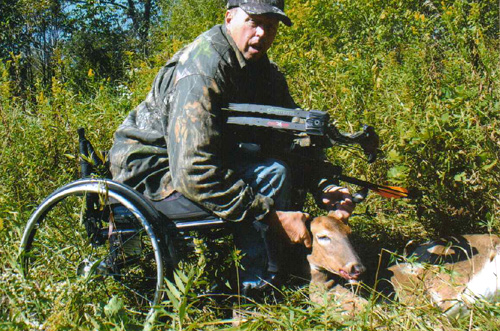 What I really enjoyed about this particular hunt was that it was something I did by myself. There is a lot of satisfaction being successful and not having to rely on someone to help. I felt a great sense of accomplishment ! At lease I don’t have to sit around and wait for someone to help me – just go out and do it. I know that I needed help with tracking but that is the result of a good plan coming together.

To More Articles by Doug Bermel…

A Video Showing Our Roots