Big Bears are Where You Find Them 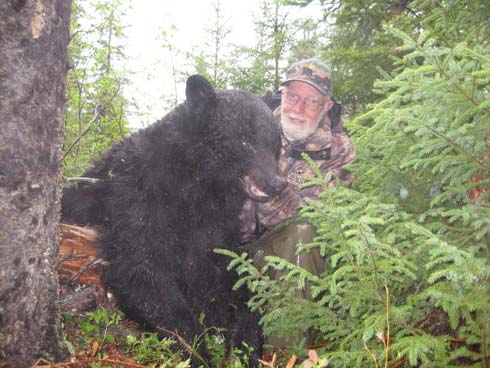 My hunting buddy Ray Moulton with a fine trophy spring bear taken the third night of our hunt this spring.

Before I get started I should set the record straight by admitting I’m a bear hunting “NUT”. In addition to hunting black bears 48 times over the years I’ve also hunted brown bears, grizzly and even polar bears. I’ve done all these hunts with a bow and I can honestly say I’m not done yet!

Well I am done with brown bears and polar bears and if/when I finally get a grizzly I’ll cross that one off the list for good as well. But black bears, I’ll most likely never stop chasing the dream of taking a Boone & Crockett qualifier with my bow to life mount in the trophy room and once I get that done I’ll still keep looking for a bigger one!

To be honest I’m not 100% sure why I feel the need to be sitting in a stand over bait every spring. Perhaps it’s the rush I get when a black bear comes into sight quietly sneaking through the dense forest floor toward my stand. Perhaps its hope for a chance at a 500# black bear with a 20+ inch skull. Then again it could just be that it’s much better to be hunting bears in the spring than to have to wait four more months for the fall seasons to begin. I may never figure it out.

To try to find a large black bear requires research. They can be taken almost anywhere from Newfoundland to Alaska, from northern Canada to North Carolina. The trick seems to be finding a place where the bears get to live long enough to reach their full potential and where they have the genetics and food to support that growth. In addition to finding a place to hunt large bears there are considerations about travel and costs.

There are hunts in areas of Alaska and Vancouver Island where there is a good chance of finding seven foot bears, but the cost of these hunts, excluding travel, can run $6,000.00 or more. As someone who likes to hunt bears every year, with a limited budget, I look for good opportunities closer to home (East Coast) and for far less money.

That is what took me to New Brunswick in 2012, and what will bring me back again this spring. The percentage of bears taken that are true trophy quality in New Brunswick is not as high as some other places, but that doesn’t mean the big bears aren’t there! A big part of the reason for the low percentages of big bears taken is that the majority of hunters that go to New Brunswick will shoot the first bear they see. That is because they are hunters looking for their first or second bear, not trophy hunters willing to hold out for that one monster that may visit your bait site.

To give you an example, I was on a hunt this spring with four other guys. Two of them had never hunted bears before, the other three of us had. Not surprising, the two that had never hunted bears before shot the first bears they saw, and ended up with small bears. Two held out for nice trophies and killed spring bears that weighed over 300 pounds with skulls close to, or in excess of, 20”. I held out all week for something special and finally saw a true trophy at last light on the sixth day. Alas, I didn’t get him but I came close!

Further research led me to another camp for next season. This camp had but three clients in 2012, and all of them shot smaller bears rather than wait for larger ones. Looking at the records from the last few years I found that very few clients had visited the camp over the last five years, which means that the bears have had an opportunity to grow. I also found that the area supports large bears, has the food, and the genetics necessary.

I visited the camp this summer, and again this fall, to check things out. I found the camp to be in wonderful shape and only seven hour’s drive from my home in central Massachusetts. I couldn’t hunt bears in this zone last fall, but I could hunt deer, and while there got to check out baits, and trail cameras at them. We had a lot of good pictures of trophy class bears during daylight, but finding big bucks proved more difficult.

The owner of the Camp (Dave Winchester) lives at the camp year round and doesn’t have internet access. It has made it difficult to book clients, which explains the decreased number of clients. He baits great areas, and baits well. There are plenty of bears and all that is lacking is a strong marketing effort. We struck a deal. I would handle all bookings going forward if he would agree to limit the number of clients so we could offer reasonable opportunities to kill trophy class bears. He also agreed to limit most of the hunting to bowhunters.

We settled on twelve bear hunters per spring and another twelve in the fall. The hunts will be six days, and cater to only six clients at a time. In the spring we’ll hunt the last week of May and first week of June because those are historically the best weeks. In the fall we’ll hunt the two middle weeks of September (which are bowhunting only). To make things even more attractive the first week in the spring will be open to bowhunting couples. This way husbands and wives can enjoy a couples environment (with cozy cabins). If a bowhunter wants to bring a non hunting spouse to enjoy the adventure this can be arranged for a small additional cost. I have agreed to manage the camp in the spring and will be there personally to make sure things run smooth.

We are looking for a few bowhunters to share a great experience with us this season. The baits are active, the camp is comfortable, and the rates are reasonable. For more information contact me at roygoodwin@comcast.net.

What’s Behind Your Tool Box?

What's Behind Your Tool Box?