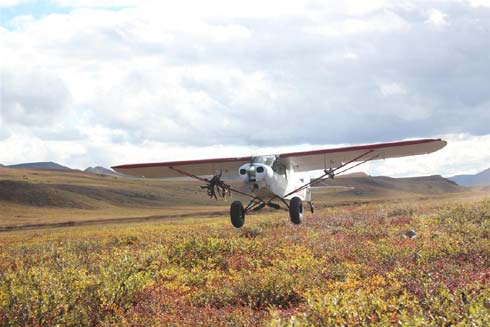 The two-seat Piper Super Cub is the workhorse bush plane for mountain hunting, as well as hunting those places where the pilots have to make their own landing strip.

The bad weather came in overnight. We’d awoke to hazy sunshine, but by 9:00 o’clock the clouds were forming to the north and we could smell the cold. It wasn’t a scent, mind you, but it had something to do with your sense of smell; you turn your face to it, your nose twitches, and you think, winter. It was time to go home.

The float plane was late, as they almost always are, the pilot turning the nose down the length of the lake as wet snowflakes the size of quarters started falling in earnest. The pilot was hurrying to beat the weather, taxing up to the shore a bit too fast and not taking the time to check if we’d put the fire out in the wall tent, taking our word for it instead as we loaded meat and duffels and strapped the antlers to the right-hand strut. Ten minutes after take-off my guide said, “We were getting a bit worried about you,” to which the pilot replied, “Had a bit of trouble with the plane back at the lodge, when I was warming her up the prop fell off.” I looked out the little window, eyes wide as saucers, then looked back at the pilot, who grinned just a bit. “That joke was old by the time Wilbur and Orville took off the third time.”

Two hours of bad road later we landed at the lodge. As we taxied past I could see the pilot’s wife standing in the doorway. She was a left-over hippie from the ‘60’s, with a long, graying ponytail, Carhartt’s, a green and black checkered wool shirt, and a little weed growing in a window box. She’d been here nearly 20 years, yet still made pancakes you could skip across the lake. No matter, after 10 days of camp food, when she offered breakfast I dove right in.

I was what the Alaskans called a cheechchako, a term that describes a city slicker new to the ways of the bush. It was my first trip to the Great Land, and I loved everything about it – the big, wild country, the people, the hunting – and bush planes, and the pilots that drive them.

Over the next 20 years bush pilots – of the both the professional and private kind – became some of my best friends. The things I have seen them do with Piper Super Cubs and Cessna’s and the old deHaviland Beaver never cease to amaze me. Thinking back on it now, I realize that escaping a serious wreck was partly Lady Luck, but mostly the incredible skill these men had. And the pucker-factor stories are endless.

There was the time that Bo and I killed the giant brown bear that made me wet my pants when it charged and I had to shoot it at five steps with an old .338, the bullet miraculously passing through his throat and breaking the Atlas joint. Bo flew us back to Anchorage the next morning so we could catch a flight to Kodiak Island to go deer hunting. The ceiling was maybe 300 feet and it was raining for real when we took off for the 90 minute flight in a Cessna 186 on floats. As we motored along the ceiling kept getting lower and lower and the winds bounced us about like a rubber duck. How Bo got us through the low mountain pass and over Cook Inlet that day still amazes me. But he had flown bush planes most of his adult life, for years flying the mail every day on Kodiak in weather that was mostly crappy, and he knew what he was doing.

I did a lot of hunting out of a friend’s Piper cub. He buzzed us around the sheep and goat mountains and across the tundra in search of caribou, moose, and bears, landing and taking off in some of the wildest places imaginable. Though we got beat up some in choppy weather, Mike was wise enough to know when to say, “The weather’s too bad, we can’t go today.” At the time I was miffed; today I’m glad he did.

Unfortunately, not all bush pilots are smart enough to say no. One time four of us flew in a Beaver to caribou hunt. When it was time to leave the cocky pilot thought he could load all the gear, meat, and us and take off the short little lake on which he had landed. He couldn’t, and the plane ended up about 75 yards into the tundra. We had to unload everything, remake camp, then the next day carefully drag the plane back to the water and patch a couple of holes in the floats before The Dude made two trips to get us all safely out.

When I lived in Valdez my next door neighbor made the mistake of going sheep hunting with a new neighbor who had an underpowered plane and overestimated skills. When he flew high into a tight canyon in the Chugach Mountains he couldn’t get out; the crash killed them both. Later my wife and I flew with a young, cocky pilot for an air taxi service out of Sitka down to my buddy Jim’s lodge. When we got there Cheryl said, “That kid has no idea what he is doing, we will not fly with him again.” It must have been a prescient feeling, because a few months later he took off with a load of passengers heading south. None of them have been heard from since.

The skilled bush pilots I know and respect are a different breed, proud men that would never think about being on some reality TV show or spend time bragging about their skills. They can MacGyver their planes together in a pinch and know what they can, and cannot, do. And they can take you on the very best adventures you’ll ever have.

Bowhunting Super Show – the line up