Ganassi Racing Teams up with Cessna 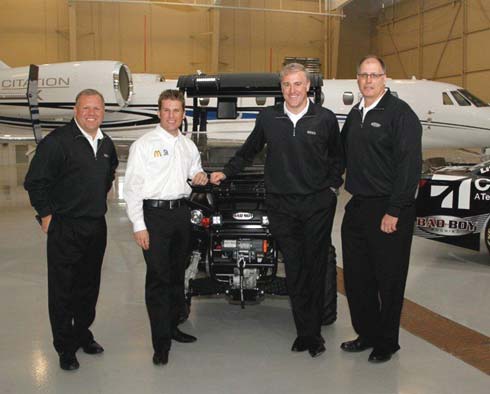 Chip Ganassi Racing Teams (CGRT) announces a multi-year partnership with Cessna Aircraft Company, a Textron, Inc. company, to sponsor cars across all three series in which CGRT competes. The world’s leading general aviation company will sponsor multiple races on the No. 1 Chevrolet SS of Jamie McMurray in the NASCAR Sprint Cup Series (NSCS) sharing assets with sister Textron companies Bell Helicopter and E-Z-GO golf carts. Cessna will also sponsor one race on the No. 10 Honda with Dario Franchitti in the IZOD IndyCar Series and one race with Scott Pruett and Memo Rojas in the GRAND-AM Rolex Sports Car Series on the No. 01 Dinan-Prepared BMW.

Each of Textron’s brands can be and often are, incorporated into every race event where CGRT competes. From a team’s air travel to and from the host city, helicopter transport from airport to venue and ground transportation onsite, Cessna and Textron have options for all of it. The partnership offers a new connection to an industry that relies heavily on private aircraft travel.

• About the Partnership: In addition to the full primary sponsorships, a Textron brand will have placement on every team, race car, driver uniform and transporter, across all of CGRT’s diverse reach of racing assets. Those assets including each of the seven full-time drivers; NSCS drivers McMurray and Juan Pablo Montoya, IZOD IndyCar Series drivers Franchitti, Scott Dixon and Charlie Kimball and Rolex GRAND-AM Sports Car Series drivers Pruett and Rojas.

• E-Z-GO: E-Z-GO is the preferred light transportation solution for golf courses, companies and consumers worldwide with innovative, reliable and energy-efficient vehicles. Headquartered in Augusta, Georgia, E-Z-GO manufactures more than 50 different vehicle models under the E-Z-GO, Cushman and Bad Boy Buggies brands. Its products range from the E-Z-GO RXV fleet golf car, with its innovative, highly energy-efficient AC Drive technology, to the Bad Boy Buggies Ambush, a “parallel hybrid” utility vehicle with dual independent gas and electric powertrains, either of which can power the machine in two-wheel-drive, or which can work in tandem for four-wheel-drive operation.

• McMurray on the Track: McMurray began his NSCS career with team owner Chip Ganassi in 2002 when he filled in for an injured Sterling Marlin and won his first NSCS race in just his second start at Charlotte Motor Speedway. In 2010, the Joplin, MO, native became one of only three drivers to ever capture both Daytona 500 and the Brickyard 400 in the same season. In his 12th season driving in the NASCAR premier series, McMurray has six victories, eight poles, 41 top-five and 99 top-10 finishes.

• Pruett and Rojas: The GRAND-AM Rolex Sports Car Series tandem of Pruett and Rojas is the most-successful driving duo in GRAND-AM history. They will compete for their seventh consecutive season with Chip Ganassi Racing. The pair has won four GRAND-AM Rolex Sports Car Series championships together (2008, 2010, 2011, 2012) and two wins in the Rolex 24 At Daytona.

Scott Ernest, Cessna’s President and CEO:
“We have been impressed with CGRT’s scope and success across all components of racing and are partnering to demonstrate how closely the concepts of speed, precision and performance bridge both the aviation and racing industries. Just like CGRT, Cessna is a demonstrated leader and is in the market to win.”

Chip Ganassi, Owner, Chip Ganassi Racing Teams:
“I am very pleased about this partnership with Cessna and Textron. It is always significant when big brands choose auto racing as a vehicle to market their products and Cessna is not only choosing NASCAR but also INDYCAR and GRAND-AM as well and we couldn’t be happier. Their products are vitally important to me. I have used their airplanes for a number of years and their performance is second to none and that is the same level of performance that we expect from our race teams.”

Jamie McMurray, Driver, No. 1 Chevrolet:
“I am really excited to have Cessna come on board with our team. I know that speed is an important part of their business, just like ours. We have a lot of excitement with the upcoming season and the new Gen 6 race cars. I am ready to get the 2013 season started, and I am looking forward to Cessna being a part of our entire organization.”

About Chip Ganassi Racing Teams
Chip Ganassi has been a fixture in the auto racing industry for over 25 years and is considered one of the most successful as well as innovative owners the sport has anywhere in the world. Today his teams include three cars in the IZOD IndyCar Series, two cars in the NASCAR Sprint Cup Series, and one Daytona Prototype in the GRAND-AM Rolex Sports Car Series. Overall his teams have 15 championships and 150 victories, including four Indianapolis 500s, a Daytona 500, a Brickyard 400 and four Rolex 24 At Daytonas. Ganassi boasts state-of-the-art race shop facilities in Indianapolis and Brownsburg, Ind. and Concord, N.C., with a corporate office in Pittsburgh, Penn.