Nothing Goes To Waste 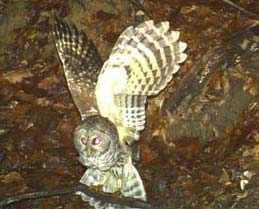 Those who do not appreciate hunting often condemn bowhunters because they feel that lots of deer are wounded, and left to die in the wild. While it is true that a minimal amount of wounding loss does occur, the Camp Ripley bow wounding study (readily acknowledged as the most complete and accurate bow wounding study ever done) showed that such losses were very low

Of course there are huge numbers of car wounding losses, where a deer gets hit, struggles off the road into the adjacent area, and lives for a period of time before dying. No cry to eliminate autos. Deer get caught in fences. Some die there, some escape, but almost certainly some suffer leg injuries and go off to die at some later date.

Mammal predator-prey attacks also lead to wounding losses. As a percentage, such amounts are unknown, but they definitely occur. Rabbits attacked by owls can and do, escape. Their wounds may be superficial, or they may be mortal. How long do those rabbits lay in holes before they die? We will never know the answer to that question. It happens.

A few days ago I got this interesting email from two local West Virginia hunters, Rich Kenyon and Dave Chidester. They were curious as to what happened to the piles of eviscerated innards left in the woods by hunters. This isn’t an original idea. Lots of hunters have done this and are doing this now.

The question then is what happens to all the “prey.” Does it all just rot, decompose, disappear?
Certainly some just decomposes and provides food for maggots, various beetles, etc. But based on the trail cam pictures that Rich and Dave emailed me, a lot of those innards is consumed by a number of species of mammals and birds. They’ve put cameras over gut piles for five years and here is what they have found.

The stomach, liver, lungs, intestines, etc., at a deer gut pile provides food for many small birds as well as eagles (they got images of an immature bald eagle), crows, barred owls, raccoons, fisher, gray and red fox, coyotes, and bobcats. They didn’t get any bear photos, but most certainly bears will eat such remains before and after their winter sleep.

Interesting to me was the fact that these remains still provide food for animals three months or more after the hunting season. And this is at a time when the winter snows and cold are hard on animals. In other words, for many critters, deer gut piles are an important source of food. One of the photos they sent me had whitetails near the remains. I couldn’t tell if the deer consumed any of the pile, but I found a recent camera study done by a wildlife biologist that showed that deer will consume meat. They had volunteers put cameras out in 19 states over a three-year period. These cameras were placed over dead rabbits, birds, and other wildlife species, as well as deer gut piles. They noted that sometimes the deer just looked at the pile, but some also consumed parts of it. Deer apparently will eat a little meat now and again.

I’m sure that Rich and Dave put out their cameras as a hobby, to keep busy and to get outdoors in the winter. But at the same time, they’ve learned some interesting details on what happens to those gut piles that we leave in the woods every fall. Predators and non predators come there to eat.