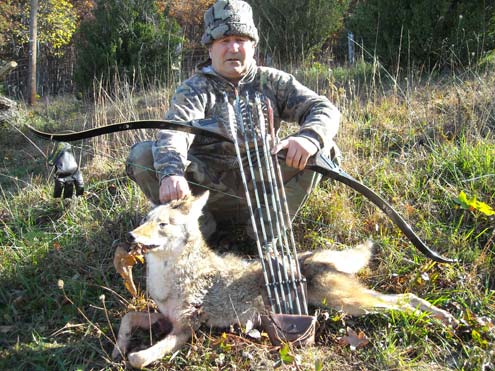 Olin Bare of Bear Archery shows what happens when you do it all the right way.

Not long ago I sat in this exact spot belting out deep buck grunts in hopes of catching the attention of a wandering whitetail. Now the scenery was a bit different; I was still downwind of a thick, nasty bedding area but there was a foot of snow on the ground and nothing green in sight. Also, instead of a grunt tube I was wailing on a rabbit distress call in hopes of luring a hungry coyote from his cozy winter den.

With a thick blanket of snow coating most of the Midwest, many post season deer scouting plans have been ruined. Rather than just sit around, some deer hunters are still taking to the woods in hopes of putting a tag or two on a predator. All across the country coyotes, wolves, bobcats and other rascals are putting a dent in the whitetail and turkey populations. Rather than just wait for the snow to melt to start whitetail scouting, how about trying to take a few predators out of the pack?

The Setup
Around me, coyotes are really terrorizing the local game animals. I’m just getting into predator hunting so I stick with basic techniques and woodsmanship skills. The best times to hunt are dawn and dusk, with nighttime being fantastic if legal. I try to set up downwind of where I think the coyotes will be, and call from there. Of course, it isn’t that simple and the basic setup requires a bit more thought. Coyotes depend on their sense of smell a lot. They will naturally try to get downwind of the call to make sure it is legit before committing. The trick is to keep some sort of barrier at your back, so they cannot get downwind. I was talking with my good buddy and coyote hunting guru Ken Morand and his logic made complete sense. For the novice predator hunter, try to get near a river, steep embankment, lake or anything else the coyote can’t get across. Then, if a coyote is interested in the call he’ll have no choice but to come in upwind.

The Call
Again, take a pretty logical approach to calling. The point is to lure the coyote out of hiding for a shot. Some people are really good at howling, but for beginners, just stick to wounded animal sounds. If a lot of rabbit tracks are showing up in the area, then use a rabbit distress call. If it seems to be more squirrels, birds, etc… then use those types of distress calls. Ken also suggested tying a few turkey feathers to an old arrow shaft as a sort of decoy/distraction to place in the ground. “The feathers give the coyote something to focus on, and help the shooter take a decent shot.” Many experienced predator hunters have expensive electronic callers. If possible, invite one of them along to show how it’s done.

Camouflage
Yet again, take a basic approach to this. Try to blend in as much as possible. Use brush, trees, blow-downs, and anything else that can cover a hunter’s silhouette and movement. Some hunters also build natural blinds out of hay bales left over from the summer. These blinds may also help a hunter stay warm. Wearing snow camo or whatever pattern that will blend in won’t hurt any. Robinson Outdoor Products, LLC. produces the Whitewater series of insulated clothing. Whitewater’s Reversible Sherpa AP and AP Snow Camo are perfect insulated hunting gear for diehard cold weather predator hunters.

Scouting
Predators can be scouted like deer and turkey. Use trail cameras at high traffic areas. Look for fresh tracks, what they may be feeding on, and dens. Listen at night for howling, “yipping” and other noises they may make. Where legal, baiting with road kill may be a helpful way to locate and pattern a few predators.

Scent Control
Even when using the wind to our advantage, a hunter has to keep scent control at the top of their priority list. Many times hours after the hunt is over the coyotes will come into the area and investigate. If they smell any bit of human scent they won’t cooperate at all in the future. Coyotes and other predators are pretty nervous animals and they don’t tolerate any human interference in a situation as intimate as this.
photo

Be sure to use all of the scent control protocol that needs to take place during deer season. ScentBlocker’s Ti4 spray will come in really handy when pursuing coyotes. Ti4 oxidizes, neutralizes, adsorbs and prevents odors on clothing and gear, making it a must have spray for any dedicated hunter. The Dream Season 17” knee boot is perfect for deep snow hunts allowing for warmth, scent control and quiet easy movements. Be sure to treat and store your apparel just like fall deer hunting garments by washing them in ScentBlocker Clothes Wash and storing them in an airtight, scent free container until the hunt. Also, keep scent killing sprays inside so they will not freeze and use them generously on boots and anything else that will come in contact with the ground. Remember, when properly set up, it’s not so much getting winded we need to worry about, it’s leaving sign that we were there.

Have Fun
As with any hunting situation be safe and have fun. Be sure to follow state and local game laws. In some areas, predators are really doing a lot of damage to game animals. In other areas, the predators themselves are protected. Proper predator management is a great way to help contribute to healthy deer herds, small game populations and turkey flocks for the future.