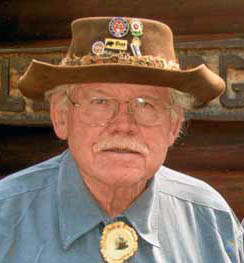 Tom Jennings, 88, a pioneering Icon of the archery world passed away quietly February 25, 2013, in Columbia, Missouri.

Tom was a visionary, a pioneer, a creator, and evolutionist who saw promise in another man’s invention and quickly recognized the potential of the compound bow, the archery tool that was to sweep the country and changed the face of the industry.

In the 1950’s and 60’s Tom was a world class bowyer with the talent to produce high performance recurve bows so exceptional that his Citation won a world championship and many others won high level tournaments.

In later years, Tom’s identifying Mississippi Gambler hat, as he liked to call it, personified his adventurous and sometimes gambling personality. Upon testing the new sample compound bow, he immediately discontinued producing his decades-old bow line and surged into improving and developing the compound bow. It was a gamble but an intelligent gamble. Tom felt it was not a gamble at all, it was a sure bet. Tom Jennings thought that way. 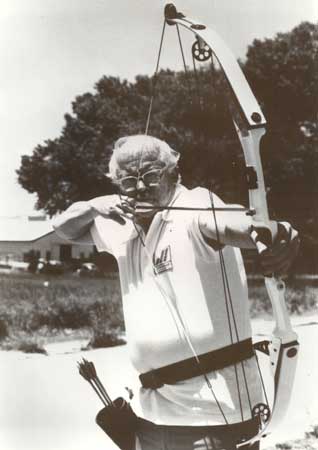 Many other national bow manufacturers had passed over the invention of the newly patented bow but Tom’s genius saw differently, thus, Jennings Compound Bows Corporation was born.

Tom always believed that form preceded art so he was not concerned with the presence of cables and wheels, he believed that the superior performance would quickly attract and appeal to serious bow shooters and he could not have been more correct. What he did affected the entire industry and all others who skipped over this product soon got on the band wagon because the guy in California, Tom Jennings, was winning followers everywhere.

Part of Tom’s personality was to not be concerned with patenting his own innovations, rather he simply stated “We will keep ahead of the competition and by the time they catch up to our idea, we will be on a new one”. Although he passed up the opportunity for more patents he did have seven patents but he always said his failing to apply for the cable guard patent, which he developed, was a company mistake. Probably his most utilized patent was the adjustable draw length wheels, cams and eccentrics, currently offered on about every compounded bow being manufactured.

Tom was not only a creative mind, he was an avid archery shooter and fan of it. For him it all started as an 11 year old boy scout and the bug bite lasted his lifetime. He logged hundreds of hours of flight time as a licensed pilot, attending bowhunts, archery events and tournaments. He truly loved the game and never tired of shooting his own creations. Every office he worked from as officer and engineer of his company, had archery targets within or outside the building where he could easily pick up a bow and try some shots. Tom truly loved the sport and dedicated his life to it. He was deservedly inducted into the National Archery Hall of Fame in 1999.

Without Tom Jennings early pursuit of the compound bow, it quite likely may have taken decades longer for it to enter the market and maybe never would have swept it as the Jennings Compound bow did in the 1970’s. In that period bowhunting license sales escalated quickly and much of the reason for that was the higher performance of the compound bow, which produced higher harvest ratios in the bowhunting world. Tom believed success breeds motivation and he proved it by providing an industry changing product, sought by all bowshooters.

Tom attended hundreds of archery events and never turned down autograph requests. He was a simple but highly dedicated man with an intelligence that seldom comes along. Tom Jennings had a very large following and his bows of 30 and 40 years ago are still seen in the hands of bow shooters around the country. He had thousands of fans and was rightfully loved by all. Those who touched Tom and knew him well all had the highest respect and regard for his integrity and honesty, he was a one-of-a-kind with few peers.

Tom was a tough old bird who was scrapping it out until the end and he will be missed. He truly was the ‘ Father of the Compound Bow’. He may not have invented it but like a step child without blood parent, Tom took it over as an infant, raised it carefully with tender loving care, looked over it until maturity and it was always his child.

Tom went where there was no trail and he left a path.