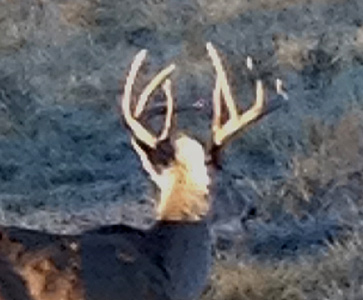 Woke up at 3:30am and learned that the 30% chance of rain just jumped to 100% with thunder and lightening a booming and flashing. Wonder how it will be at 5:00 am “get ready to deerhunt” time.

When the alarm went off I laid there listening to the rain on the trailor’s tin roof for a couple of minutes. And went back to sleep. Now it’s 10:00 and the sun is out now. The weather says we’ll have a 20 – 30 mph wind this afternoon.

I returned to the same stand for the afternoon hunt. We went out early, thinking they would be moving after the rain. With a half an hour left of daylight two young bucks walked by at 15 yards. And that was it for this hunt. Rick and I had already loaded everything in my truck and we headed for his house.

It was chilly and calm as I waited for daylight. Soon after good daylight I noticed deer in the trees to the north. They were walking along on a trail that went 15 yards from the Turtle Blind I was hunting in.

Four does came by my blind within 15 yards. When I turned on my digital camera its battery was dead so I took a picture of them with my iPhone. 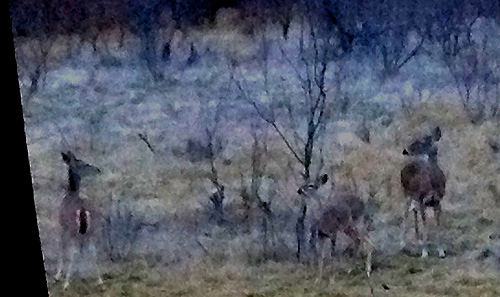 Here are 3 of the 7 deer I just saw. This is an iPhone picture.

Next 3 more does came down the same trail but turned on a trail to the east and started walking by the blind on my right side. Suddenly, a strong and very loud wind came howling in from the south. The deer turned to the north and ran into the trees.

While the wind blew continued blowing hard two other does came hurrying by me from the woods to the south.

As time passed I saw 4 more does come through. I didn’t take a shot because this area has the management bucks I’m looking for and we don’t want to put pressure on the area.

These management bucks could very well show up. Rick saw them here twice before he moved me here. And speaking of Rick, he checked out a new area he has leased for next year. He said it looks interesting.

When we returned to camp Colby Ward was there and the three of us drove to Bowie, TX and ate at the Longhorn Cafe. This place has a super buffet and we enjoyed it.

Back where I was this morning. Very overcast. Gusty winds. Chance 0f showers later this afternoon. Hello all 8-points.

15 minutes before last light the place went nuts with deer activity. They came by me from the north and the east. But most came from the north. A buck that had lost its antlers came up to a doe and kicked it with a front foot. Then it got dark and today’s hunts were over.

This morning I had 2 does in close to me but they were on the side of Rick’s  Blind Turtle Blind that has the windows closed and I couldn’t get a shot. Meanwhile Rick Philippi was seeing plenty of deer. A big, heavy horned 8-point came through the area first. A perfect management buck, which is what we are here for. Rick was pumped at the possibility of taking this buck. But he didn’t get the range of the buck and angle of the shot  to come together. Later a 3 1/2 year old 10-point come from behind the blind. Since this is the type of buck they want to reach his potential Rick didn’t take the easy shot opportunities.

Rick also saw a buck that had dropped both its antlers. And Rick saw 4 does. 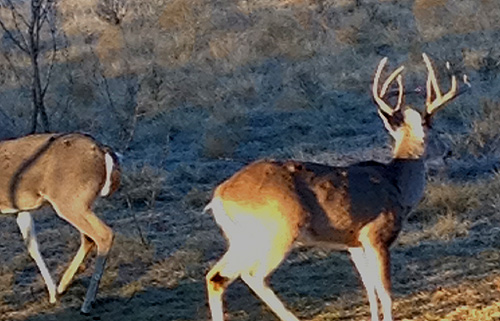 Rick took a picture of the 10-point buck with his iPhone. He sure has some fine brow tines.

Rick moved me to the blind he had been hunting and he hunted a “secret” place he has a treestand. Rick saw one doe and so did I.

Rick and I were on our stands, a mile apart, well before daylight this morning. However, no deer moved. The weather was pleasant at daylight, but as the day progressed 30 mph winds moved in and the temperature began dropping. On the afternoon hunt Rick saw 16 wild turkeys, mostly Toms and Jakes. He also saw 7 does during the windy afternoon hunt. I saw the same thing I saw this morning, nothing. 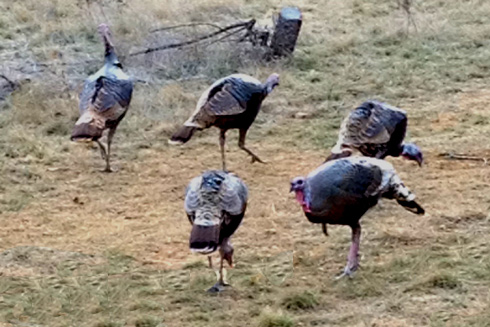 Wild turkeys are out of season now and we are not hunting them. When some came by Rick’s stand he took pictures of them with his iPhone.

The temperature dropped from the mid 60’s to the high 40’s and will probably be in the 30’s tomorrow morning.

Twenty minutes ago my long time hunting buddy Rick Philippi and I arrived at his deer lease and deerhunting property. We just unloaded our stuff. It’s too late to hunt this afternoon, we were hung up in transit in two places due to road repairs. However, we are here now and in the morning we will be out in the woods.

Rick and Colby Ward write a column for Bowhunting.net called “Management Advantage: Game and Land Management” and their property is living proof of what can happen with good game and land management. This is not a game farm or high fence deal at all, it’s ordinary Texas cattle ranch country. Rick and Colby have done things right and now have many impressive mature bucks on the property. For example, this year one of the hunters, Colby Ward’s son Michael, harvested a 27 point buck that green scored  a whopping 210 5/8 B&C. This is a buck of a lifetime, Congrats Mike. 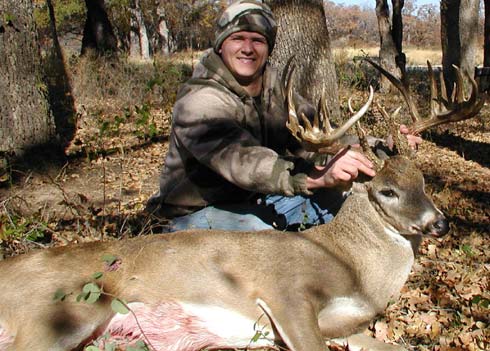 Buck taken this season on the lease that Rick shares with Colby Ward — after several years of planned game and land management.

Ok, back to the real world. My part in the hunt for the next 4 days is for “management bucks,” which are mature 8 point bucks.  The reason I’m limited to 8-point management bucks is simply that I am not a member of this particular deer lease. Rick is and he can harvest any buck he decides to.

It will all kick off tomorrow morning before daylight. 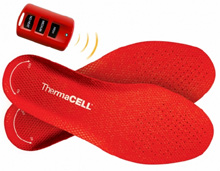 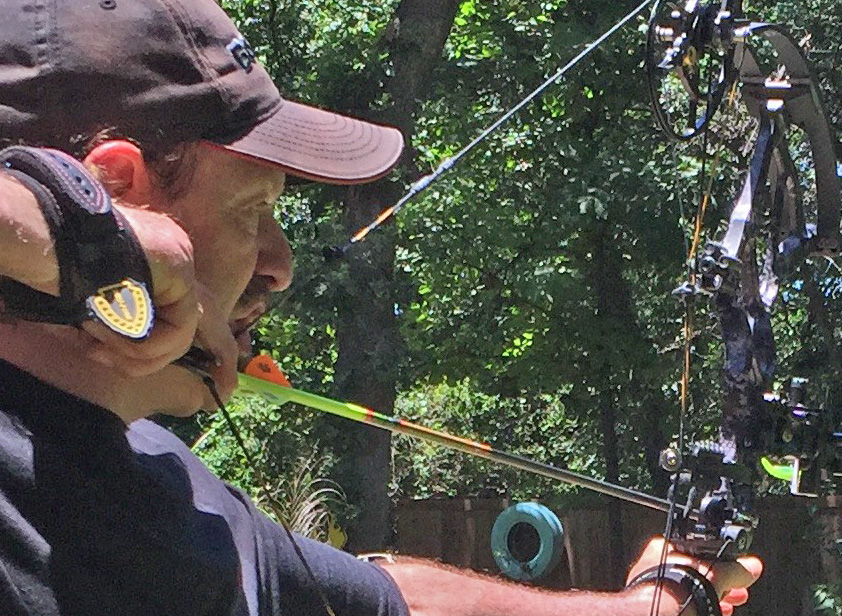 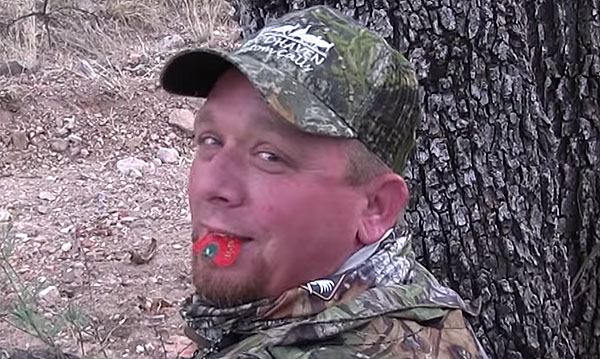 Getting A Royal Slam 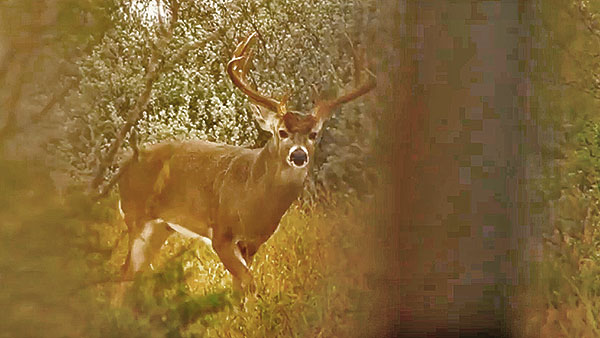 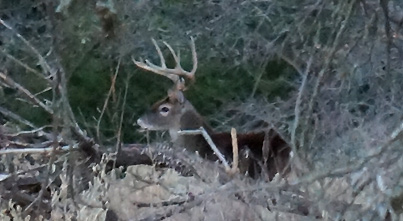