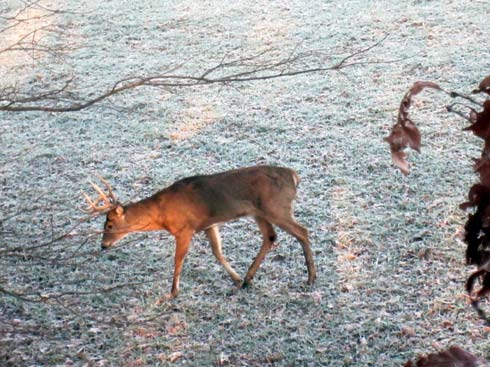 TREESTAND ACTION -- This is one of numerous young bucks I passed up this past deer season. He crossed a frosty field of winter wheat and walked within 15 yards of my stand during the November rut.

I HONESTLY DON’T KNOW how many shots I took while bowhunting the 2012-13 deer season. A dozen? Two dozen? Fifty? A hundred? I’d guess offhand it was more than that. But the truth is I didn’t keep track and only know more shooting than usual took place during one of the most enjoyable deer seasons I’ve had in more than half a century of chasing after bucks across much of North America.

The fact that I didn’t fill either my Indiana or Illinois whitetail tags doesn’t matter. Eating tag stew has happened before and it’ll happen again. Regardless, the past season ranks as one of my best and I have pictures to prove it. While it may have ended with no venison in the freezer or capes and antlers dropped off at my taxidermist’s shop, I was left with great memories and enough deer photos to illustrate my next several hunting books. That’s one obvious advantage of carrying one or more digital cameras along each time I head into the woods. I know I’ll rarely if ever fail to snap off multiple shots of the deer I see.

Cameras can add a whole new dimension to bowhunting, helping pass the long hours on stand and providing proof positive that you’re not making up the stories about that nosy old doe or rutty young buck that walked under your tree or posed in front of your blind. And even better, there’s those times when a really good buck comes tantilizingly close but never steps within bow range. Shooting a photo or hitting the Record button on a video cam before the buck vanishes from view preserves the memory and the special moments all hunters enjoy. A photograph or video image offers concrete evidence the antlers were as big as you try to describe to skeptical buddies. That old saying about one picture being worth a thousand words is right on target!

I’ve faithfully toted a camera afield since the 1960s and still have b/w prints and color slides to prove it. Being a bowhunter is my excuse, as if I needed one. ButI also write about my adventures and document everything from a remote hunting camp to stubble-faced hunting companions, mountain scenery to a variety of wildlife, plus huntin’ gear and grip-and-grin success photos of smiling bowhunters and their critters. Time was despite the bulk of SLR cameras and multiple lenses, I somehow always made room. The same was true when videotaping hunting adventures became popular. There’s something about seeing the hunt’s action unfold that is hard to beat. And you don’t have to be an outdoor writer or videographer to include a camera your daypack or pocket. Today’s lightweight, pint-sized digital cameras produce sharp, pro-quality prints. Even the relatively inexpensive high-def mini cams capture broadcast-quality footage undreamed of only a few short years ago. And they’re easy to use, too.

But be warned! Using cameras while hunting is often highly addictive. Craig Halbig, an Illinois deer hunting buddy, became intrigued by the photos and videotape I shared when we got together after a day’s bowhunt. He promptly bought a video camera and tree arm and now routinely captures some excellent whitetail and turkey footage from his own treestands. Last spring he taped his 10-year-old son, Clayton, bagging his first-ever gobbler. Though the footage will never be broadcast on the Outdoor Channel, that clip of a milestone moment in a young hunter’s life will a treasured part of the Halbig family archives for generations. Bank on it.

Honestly, there’s a make and model still or video camera to fit anyone’s needs and budget. Space doesn’t permit more than a brief mention of what I prefer and why. While I’ve had excellent results with my Sony video cams and my little Canon, Nikon, and Minolta digitals, most any point-and-click cam with a mini-zoom will give excellent personal photos. For more info, research published books and articles on the subject. Drop by a camera department or photography supply store and speak to a knowledgeable clerk who can answer questions and offer advice.

Just keep in mind all you really need for photos is a digital camera and card. If it’s video that’s snagged your interest, I’d suggest a high-definition mini-cam with complementary camera arm and tripod. Cabela’s, Bass Pro, and other well-stocked outdoor stores offer swivel arms at reasonable prices. These strap-on camera supports may not be professional quality but they’re much better than trying to hand-hold the small video cams. Zooming and panning by hand produces jerky, bobbing “Blair Witch” movie footage that can quickly makes viewers seasick.

Yeah, I know nothing beats the adrenaline high you get watching a well-aimed arrow zip straight and true to a big buck’s boiler room. But if that’s not fated to happen, snapping a quick picture of the buck before he walks out of your life just might be the next best thing.