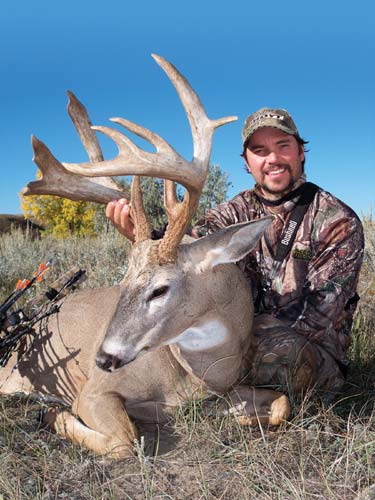 Observe how big bucks enter a food source each night. If a buck comes out in the same spot several times he'll probably do it again.

LOOKING FOR A TROPHY WHITETAIL? THE MIDWEST MIGHT NOT BE YOUR BEST BET ANYMORE

WHEN YOU TALK whitetail hunting, most folks immediately think of Illinois, Iowa, Kansas, Texas or other states in the Midwest, South or East. But friends, you can bet your antler belt buckle that some of the most exciting whitetail hunting happens far west of these deer hotbeds. Folks, we’re not in Kansas anymore!

Hunting for Western whitetails is truly exciting. It’s hard for Easterners to believe, but the sheer number of deer in the West can be incredible and you see some really heavy concentrations of deer. If you’ve ever watched a TV show filmed along Montana’s Milk River, you’ve probably seen just how abundant Western deer can be. Deer practically come oozing out of cover to feed in alfalfa fields in the evening. It’s always exciting, there’s always action and there are plenty of nice bucks to go around.

HUNTING EARLY
Early season is probably the best time to hunt Western whitetails. Deer are very predictable early in the season — even trophy-class bucks. Archery seasons open in most Western states around Sept. 1. At that time, it’s not unusual to see bachelor groups of bucks still hanging together. This makes for memorable hunting and awesome video. Sometimes the hardest part is picking which buck to shoot. Plus, during that first week of bow season, you’ve got a legitimate shot at taking a velvet buck, which is a goal for a lot of hunters.

Early season hunting is actually pretty simplistic, which just adds to your chance of success. At that time, deer rely heavily on alfalfa fields. By that time of year, most of the natural grass is burned up from long, hot, summer days. In some areas, alfalfa fields will be irrigated, and the stuff grows lush and green. Alfalfa is the only thing around that’s green and the deer practically attack it. By the time the rut rolls around, deer scatter, as bucks chase does, making it a lot harder to ambush a shooter buck.

It might be hard to believe, but hunting is way better on opening day than it is during the rut in the West.

ACORN CONNECTION
When archery season opens, the strategy is simple: target deer coming to feed in alfalfa fields in the evening. However, by mid- to late-September, feeding preferences change, at least temporarily. At that time, scrub oaks begin dropping acorns and deer are attracted to them like a magnet. You’ll find these scrub oaks growing in valleys and draws at relatively low elevations. Some years, deer hit acorns harder than others because acorn crops are sporadic. Everything in the West, from acorn crops to antler growth, is related to spring weather. If there’s good moisture in spring, antlers grow larger and acorn crops tend to be better, unless there’s a late freeze from a spring storm.

The way deer feed on acorns is amazing. I’ve had deer come right under my stand and I’ve had a lot of fun watching them rooting around like pigs to find these small nuts.

The acorn window is short-lived. After a week or two, the deer have most of the acorns cleaned up and they go back to feeding on alfalfa fields until they scatter during the rut. 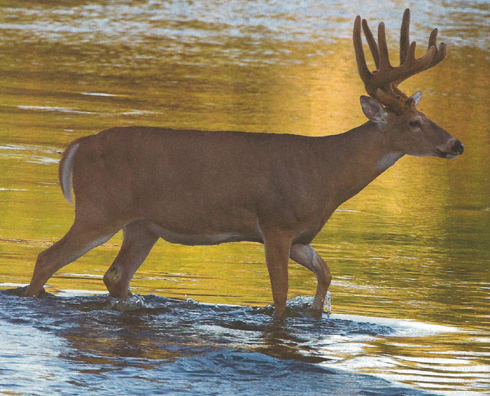 WESTERN SCOUTING
Anyone who has ever hunted in the West knows the importance of good optics. Western hunters do a lot of glassing over wide-open country. The best way to put a buck on the ground is to put in your time scouting. I climb up high to a good vantage point in the evening. I want to make sure I’m high enough that I have a good prevailing wind to keep deer from detecting me. You’ve got to watch out for swirling winds that could tip off your presence to deer.

After I get to my scouting spot, I glass for several days as deer filter into alfalfa fields to feed in the evening. Deer, including big bucks, are highly visible and it’s really easy to keep tabs on them as they leave their bedding areas and enter scrub oaks or alfalfa fields to feed each night. In this respect, Western whitetail hunting is a lot different than hunting in the East, where deer are in thick cover most of the time. It’s just a lot more fun to scout Western deer.

Observe how big bucks enter the food source each night. If a buck comes out in the same spot a couple days in a row, chances are it’s going to come out there again. Watch for possible ambush sites along its path.

A buck I shot a couple years ago was a prime example of how predictable Western deer can be. I watched a heavy-racked buck that would come through a cattle gate and then turn to the left before stepping out into the field. Most of the other deer came straight through the gate and simply walked out into the field, but this guy liked to lurk along the edge of the cover. Every night for five nights, it did the same thing. When it was finally time to hunt, I set up along the route it had been taking. It came through the gate, turned left as usual and came right to me. It was a mainframe 9-pointer with some stickers. It scored 160 with 43 inches of mass. The only reason I got that deer is because I watched it for five days and knew exactly what it was doing.

When it comes to preparing for your hunt, it’s better to hunt smart than to hunt hard. Forget morning hunts. You’ll just booger the deer out of the field as they return to their beds. If you spook them once, they will be a lot more wary and more inclined to use the field only after nightfall, especially the biggest bucks.

Scout in the evenings to pattern a buck and then hang a stand quickly at midday. Try to be as unobtrusive as possible when you place your stand and make sure you minimize the scent you leave behind. Fortunately for hunters, even though cover can be somewhat sparse, often there are a lot of ponderosa pines at slightly higher elevations, just above alfalfa fields. The bucks really want to stick tight to heavy cover as much as possible before entering open alfalfa fields, so they often pass near trees, which helps a lot when trying to ambush a deer. Ponderosa pines have a lot of branches that really provide some great cover. This is essential when you are dealing with dozens of eyes. Luckily for Western hunters, our whitetails haven’t learned to look up into trees like deer in some Eastern areas do.

There is usually a suitable tree for hanging a stand, but ground blinds are an option for Western whitetails as well. Portable blinds can be placed in draws, in scrub brush or other travel areas that lack suitable stand trees. Hay bale blinds placed in the middle of a field can also be effective and exciting to hunt from, but you risk scaring deer while hunting in their feeding areas.

SHOT CONSIDERATIONS
Contrary to what Eastern hunters might think, you don’t necessarily have to take mile-long bow shots in the West. Most of your shots, like in the East, will be less than 40 yards, although my Bone Collector Brother Michael Waddell took a great buck at 52 yards a couple years ago on a Western hunt.

Although your shots won’t necessarily be long, remember, Western deer are skittish. They are constantly dealing with lions and other predators. Aim at the heart or the lower one-third of the lungs to keep deer from ducking your arrow.

WESTERN WEATHER
Weather varies a lot in the West. It can be 30 degrees in the morning and 90 degrees in the afternoon, so you really need to bring the full gamut of hunting gear, from heavy winter clothing down to shirtsleeves. Layering is key so you can adjust to changing temperatures.

Obviously, hiding from the noses and eyes of so many deer is a challenge as well. Finding good stand sites that keep you concealed from deer is imperative. You also need to make sure you are as scent-free as possible, especially if the weather is hot. Using ScentBlocker’s scent-elimination products will ensure deer don’t bust you.

BONUS SPECIES
The idea of watching dozens of deer in a single evening makes hunting Western whitetails a very appealing proposition. As if that wasn’t enough, you can make your hunt a real dream by combining a whitetail hunt with other species. Mule deer and antelope are most likely to use similar habitat to whitetails. In fact, you’ll often see muleys while you’re whitetail hunting. Elk typically inhabit higher elevations, but with some extra work, you could chase elk as well. If you’ve only got one chance to hunt out West, why not go all out?

GO WEST
Some hunters don’t even realize that Western states like Montana, Wyoming and even Idaho have populations of white-tailed deer. This adaptable species keeps spreading West and into higher elevations. They are now quite abundant in many areas. Plus, they are pretty predictable and relatively easy to hunt.

Although the Western states might seem like an unlikely place to shoot a trophy whitetail, you just might be amazed at the caliber and quantity of deer that live there!

For the best in scent control be sure and visit: Robinson Outdoors 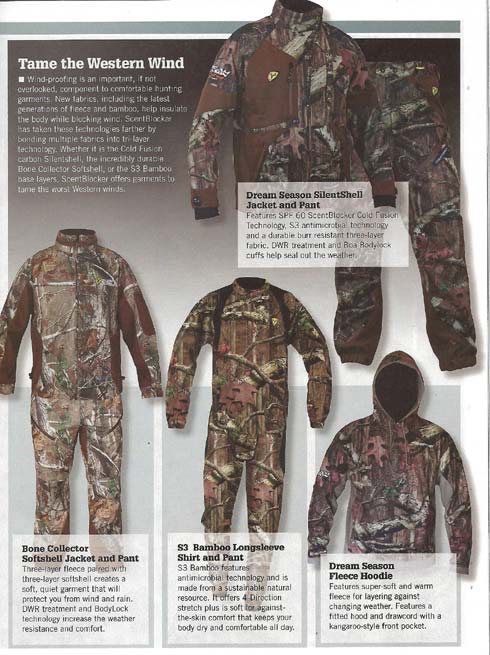