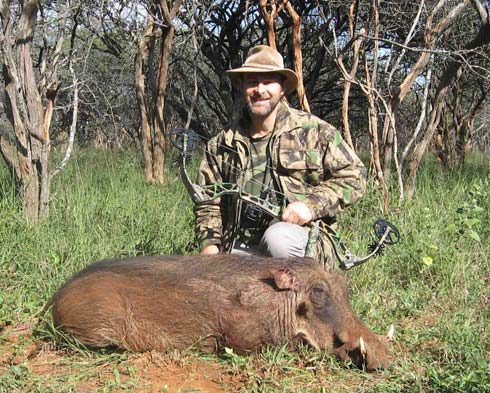 Author with arrowed warthog. This stalk paid off.

Warthog certainly have a good sense of smell and their hearing is excellent, but I suspect they stood fairly far back in the queue the day eyesight was handed out.

On quite a few occasions I have been amazed at how these animals can stumble right on to you, apparently because they did not see you. And their grunting and digging are often dead giveaways on their location. This is certainly something a hunter can take advantage of.

I vividly remember two occasions when a warthog walked right up to me. If I had been ready, I could have bagged both of them. It happened one evening while I was walking back to camp after many futile stalking attempts. It was getting dark and I was only a few hundred yards from the camp. While I was strolling with my compound bow over my shoulder, a warthog suddenly came out of the bush from my right side. I stopped dead still and the animal ran past me, crossing the road and disappearing into the bushes on the opposite side.

On another occasion I was also on my way back to camp when I met up with Carl Brandt, a hunting buddy, who had also given up on the day’s hunt. We walked casually down the dirt road while talking about the stalking mishaps of the day. At one point, when we stopped to empty our water bottles, Carl noticed something in the road behind us. At first we thought it was another returning hunter, but then we decided it had to be a cow. However, it soon became apparent that it was a warthog trotting right down the middle of the road, straight towards us. We knew that it would immediately see us if we moved, so we stood dead still. The animal stopped about 20 yards from us, then ran in an arc around us and came right back to the road once it had passed us… and off it went.

One day I was walking on a ranch near Vivo, an excellent place for stalking. There was lots of soft sand for silent walking and recent rains made it easy for a city slicker like me to follow a spoor. Being fairly well camouflaged I managed to get pretty close to a herd of nyala. I followed their spoor, thinking they were kudu. Okay, quit sniggering, I told you I’m a city slicker.

Anyway, the bull and ewes passed not more than ten yards from me, although I was completely in the open. Fortunately I was standing dead still. Unfortunately, the nyala would have spotted me had I lifted my bow and anyway, nyala certainly weren’t on my meat list.

I continued walking slowly through the bush, stopping regularly and taking my time scanning the area ever so often to see whether I could spot any animals that were not aware of me already.

Then a warthog suddenly appeared from the bushes nearby and trotted right past without seeing me. As soon as it disappeared behind a bush, I took off in a wide curve at full speed to intercept it. To my amazement the maneuver worked and as I stood hiding behind a bush, the warthog suddenly appeared in front of me at less than 25 yards. To get a good shot at the animal I had to move out from behind the bush, moving to my left. As the animal moved behind a bush I moved sideways, keeping it in sight and bringing the bow to draw.

As the animal cleared the bush I was ready and my bow drawn. Since I was standing dead still and was partially hidden behind a bush, the warthog did not see me. I only had to move slightly to place the pin on his vitals. I made a soft hissing sound, which caused the animal to pause. The next moment the arrow was on its way.

The pig heard the twang of the bow and started moving. But it was too late. The arrow hit it in the vitals and passed right through it. It ran off in a great hurry – only to die 50 yards farther on.