by Ryan Litwin
in Bowhunting Posts
0 0
A A
0 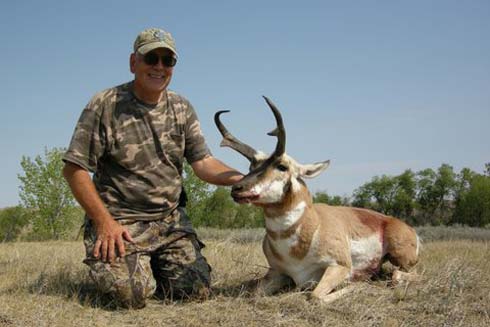 I am blessed to have been able to make a living for the last decade living this Rodeo life but it isn’t always easy. Being a Rodeo Clown involves spending many lonely miles living on the road away from home, driving all night, working sore, sick or tired. Being able to deal with these things and even thrive under these circumstances is what has made me successful over the years in a lifestyle that chews most people up and spits them out.

What this career has afforded me however, is to set my own schedule and runs and therefore spend a lot of time doing what makes me the happiest, hunting. I take most of the fall off from the road and have worked as an elk and mule deer guide in Montana and Wyoming since 1999. Often times I have to fit in my own hunts between clients where I am guiding instead of taking a couple days off. This past season I had some fun with archery Antelope, something I have been too busy to take advantage of for the last couple years.

One of my favorite things to do with the little free time I have is to take my Dad hunting. He spent his whole life taking me hunting in the woods of upstate New York and sacrificed a lot of his own hunting time to include me. Since I have been living and hunting in Montana I have loved having him come out over the various seasons and experience different hunts with me. This year we had planned for him and one of his good friends, Don, who I grew up going to deer camp with, to fly out to Montana for an Archery Antelope hunt.

In Montana we have an August 15th opener and that is still in the middle of my rodeo season but I had a schedule that would allow for this hunt. I worked Freedom, Oklahoma three performances on the opening weekend then left after the last performance and drove 17 hours straight, arriving at the lodge in Montana about 2 o’clock the next afternoon. I was exhausted but I met Dad and Don there and they were itching to get out and scout and set blinds so with no sleep, out I went! We spent the rest of that day putting together what I thought were two great setups on the very limited water we had last fall.

In a drought year like we had last season if you can find a water source that antelope are using you set up a good blind and hunt it hard. Put in the time and you will score but be sure it is water they are using. Just because you think it is the only water for miles, unless you see signs of use, don’t waste your time.

We set Don up on a fantastic pond and on day 2 he shot a great goat, his first ever and was ecstatic! Dad, on the other hand, spent over 50 hours in the blind that week and never had an opportunity.

We had made the mistake of finding what we thought was good isolated water in an area with a lot of antelope but instead of watching from afar for a whole day and being certain where they were watering we assumed they were watering in this spot. It is worth burning one day of your hunt behind a spotting scope in an area where you can watch antelope and make certain you know where they are watering. Once you are certain you have just radically increased your odds and in my opinion, you will kill one in less than three days.

A few things led to this oversight. One, because of my rodeo schedule I had no time to scout before Dad arrived. We were hunting property I had a lot of experience on but last year was a strange year with the kind of a drought we hadn’t seen in 50 years. Two, we got a little impatient and thought instead of scouting from afar we would go ahead and sit in the blind on a waterhole to scout so in case an antelope shows himself we would be in position for a shot. By doing this we were just always playing catch up and moving blinds. Better to just devote one day to scouting.

The third thing that led to Dad not scoring is that my father just has really bad luck. Always has. So I like to blame this instead of blaming myself. After all I can’t let an old guy’s track record be a black mark on my guide statistics! We still had a really great week at the lodge; we ate fresh antelope tenderloin on the second night, told stories from the old deer camp and just enjoyed a week of hunting. I had to leave and head to another Rodeo in Montana and the guys finally heading home with Dad saying he experienced Antelope Archery hunting but figured he had no reason to ever experience that again! Funny thing about it though, when I was home for Christmas he starting talking about it again saying “The next time I do that I think I’m gonna…..” A few weeks later in the season I had my opportunity to bowhunt antelope but that’s another story.