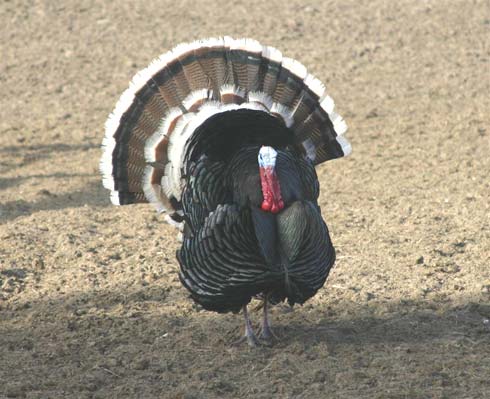 Like the West, the Merriam’s turkey is big, bold and tough, and hunting them requires a pioneer spirit that epitomizes the country. The experience is well worth the effort.

Though there are six wild turkey subspecies in North America, one represents western turkey hunting to me above all others. Two are eastern turkeys pure and simple — the Eastern and Osceola subspecies. There are too few of both the Gould’s and Oscellated birds to offer enough hunting opportunity for them to be a part of most of our hunting experiences. And while the Rio Grande turkey has a lot going for it, it is primarily a flatlander, living mostly at low-elevation or in the foothills.

The Merriam’s subspecies, on the other hand, is found primarily in the ponderosa pine, western mountain regions of the West. A large turkey — mature birds are about the same size as a big Eastern turkey — its historic range encompasses Arizona, New Mexico and Colorado, though according to the National Wild Turkey Federation (www.nwtf.org) it has been successfully stocked beyond its suspected natural range in the Rocky Mountains and outside of the mountains into Nebraska, Washington, California, Oregon and other areas.

Their normal range receives annual rainfall amounts averaging between 15 and 23 inches. They live in big country and can cover a lot of ground. In fact, some Merriam’s migrate from the foothills of the Rocky Mountains to higher elevations in summer for breeding and nesting and return to winter in the lower elevations. According to the NWTF, movement distances vary but more than 40 mile movements are not unusual. These movements may differ annually and geographically,depending on snow conditions and generally occur between mid-March and mid-April — just in time for spring hunting seasons.

In the big country that the Merriam’s turkey calls home, hunters need to adapt their tactics and techniques to cope with the terrain, weather, and idiosyncrasies of this challenging gobbler.

“To be successful you must first locate birds to hunt, and in the big country the Merriam’s turkey calls home you must scout efficiently and quickly,” said my friend John Higley, who is an acknowledged expert on western turkey hunting and author of the 154-page book, Hunting Wild Turkeys in the West (postpaid, autographed copies can be had by sending check or money order for $16.95 to John Higley, P.O. Box 120, Dept. NAH, Palo Cedro, CA 96073).

“You can’t spend all day in one place, like you might do on a relatively small farm in the east or south. The key is to travel accessible roads both on private land if you have permission to hunt there, or on the vast expanses of public lands that hold turkeys, by truck, mountain bike, or on foot, looking for sight, sound, and sign. Instead of stopping where it is thick, stop where it is more open or there are openings in the forest canopy of pine or oak. This is where turkeys like to hang out because there is more food is these open areas. Check out these places for tracks, especially in the dirt roads, and go from there. You might make a few calls to try and raise a bird. One of the most important tools you can have is a good 8X or 10X binocular, because glassing for feeding or strutting birds over long distances is critical.

“When scouting, you do your thing and move on,” he said. “You don’t wait an hour, but move on to the next spot relatively quickly. That’s very important.”

In more mountainous country, Merriam’s birds will be found at elevations at or exceeding 4000 feet, though I have had some of my best Merriam’s hunts ever in western South Dakota and northeastern Wyoming a bit below that level. According to Higley, there are some little things you can do that will help increase your odds for success.

“At the higher elevations, you need to be in decent shape to hike around the steep mountains,” Higley said. “Also, hunt timing is very important. While most of us like to be out there opening day, many times the hunting can actually be better later in the season thanks to the winter-like snow storms and high winds that not infrequently occur in Merriam’s country in early spring. Also, dirt roads can become mudded out and undrivable. You’ll also find that most western birds, including the Merriam’s, gobble up a storm in nice weather, but clam up when a storm front is passing through. If you can time it, a great time to go into the high country is the first break of good weather right after the season opens up.”

Higley also noted that western spring weather can be anything from sunny and warm to cold, raining, snowing, and windy. “I never travel to hunt a western state without packing along a lightweight, packable Gore-Tex rain suit, long underwear, and cold-weather clothing and boots,” he said. “It may be spring, but it can act like winter.” I’ve also found bringing along a lightweight set of hip boots or even chest waders can make it possible to get across creeks that would otherwise be impassable due to heavy rains.

Glassing is an important part of my Merriam’s turkey hunting strategy. I treat it just like deer hunting — find an elevated place with a good view of prime habitat and sit and glass early and late in the day. Many times I have seen birds fly off the roost in the morning and tracked their movements, then watched them fly up in the evening. Well before dawn the next morning I am in position and waiting. If no birds are spotted or heard, I move on and keep looking. I may use friction calls or loud coyote or crow locator calls that can broadcast their sound a long distance in windy conditions — a common phenomenon in much of Merriam’s country.

In this big country, it often takes a Merriam’s gobbler longer to reach you after you set up and call than when hunting small farm Eastern birds. Thus, patience and confidence are critical elements when calling is the center of your hunting strategy.

However, I have also found that often the Merriam’s gobbler will gobble his head off on the roost just before first light, but once they hit the ground with other gobblers and hens they will just flat shut up. Your chances of calling them to you are about as good as a politician keeping his promises. To get a crack at these birds you need to determine their line of march, get ahead of them without being detected, then set up and wait for them to walk past you as they head from roost to feed and water while doing little, if any, calling. In these situations I love to use a full-bodied strutter decoy with a real turkey fan — something I have written about in past column on bowhunting.net.

During the day you may locate gobblers strutting in openings among the trees in a mountain forest, along creek banks, and the like. Then if you can sneak like a cat into maybe 80 yards and show them your decoy, you just might be rewarded with a gobbler that attacks you.

Where to Find ‘em:

Naturally, state game departments are the place to get specific information, as is the aforementioned NWTF website. I have had great Merriam’s turkey hunting in southeastern Montana, northeast Wyoming, and western South Dakota and Nebraska. In fact, this region makes it possible to hunt three states in a week or 10 days and harvest as many as six Merriam’s gobblers. One outfitter that offers a reasonably priced and excellent six day multi-state hunt of this type is G-Man Outdoor Adventures (605-545-3051; www.gmanoutdooradventure.com.) The catch is that you have to apply for turkey permits in each state, and the deadlines occur in very early February.

Other good areas for Merriam’s hunting include the mountains of central Arizona that extend into western New Mexico; the mountain country that extends from northwestern and central New Mexico up into southern Colorado; and a band of mountains along the western edge of Idaho that runs north along the Oregon and Washington borders to the border with British Columbia and extends west into extreme northeastern Washington.

Like the West, the Merriam’s turkey is big, bold and tough, and hunting them requires a pioneer spirit that epitomizes the country. The experience is well worth the effort.

The ‘Web’ Armguard from Bohning