My Bow Collection… Minus Three 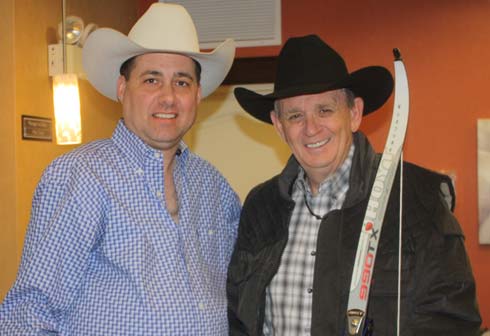 I have been asked many times what I do with my stage bows once I retire them from the stage and replace them with new models. I have pro staff friends that often sell bows once they are done with them but mine aren’t for sale. For me the answer’s simple, I keep them. I figure someday my two sons may want their old man’s bow collection of stage bows. I’ve been meticulous about keeping every bow I have used on stage for the past 28 years. I want my boys to have a complete collection to inherit. Many of them are on display in my parent’s retail archery business for people to see.

I have every stage bow I have used in my career except three. That’s right, I have every bow I’ve hit an aspirin with since I started with the exception of three. Where are these three? Well, the first one to leave my hands went to a very good home in South Texas. I was doing shows for the world famous King Ranch in the 1990’s. We were between exhibitions and so with some time on our hands my assistant and I were talking with the wildlife/security manager Butch Thompson under a mesquite tree on the main lawn of the main house. Butch wanted to try my bow so we gave him a few arrows and he begins shooting my bow. I never let anyone shoot my stage bows either but I liked Butch a great deal and held him in high esteem. Anyway, about the fourth time he shoots my bow he ROBIN HOODS an arrow! That’s right..split an arrow. So that bow became his bow and I signed and presented it to him. That was the very first stage bow I ever gave away. Butch Thompson is the real deal, a hero and a friend. One of those people that have your back and will come running when needed. He’s one of my favorite folks and I do not see him often enough. I am proud that he got the first bow.

The second bow to leave my hands now hangs in the office of the University of Texas head football coach Mack Brown’s office. He’s one of my heroes and a great friend. I had been in Austin, Texas to speak and perform for the Earl Campbell gala at the Cool River Restaurant. Earl Campbell took me to the University of Texas football practice, which is not open to the public and I met Coach Brown. That day Earl and I spoke to the team and then a week later I flew back to Austin and performed for Coach and the team. A year or so later my family and I went to UT to visit Coach Brown and I took him one of my stage bows for his office, appropriately a burnt orange bow. I joked with coach that since they’d published his salary, I knew you couldn’t go to a mall and buy a gift for someone in that income bracket so I’d brought something money couldn’t buy–one of my stage bows. Coach Brown is a class act and solid as a rock, a truly great man. You can see a copy of the show I did for Coach Brown here: http://www.texassports.com/allaccess/?media=199024 I wish more coaches approached their players like Mack Brown. He not only develops winners, he develops leaders and contributors to society.

The third bow to leave my hands was in Lexington, Kentucky on March 2, 2013. It is a bow I used during my 2009 tour. It went to a man who is also a hero and a friend, a man who has given so much to so many deserving people, General Leroy Sisco. General Sisco and I were going to attend the George Strait concert that evening and George and Gen Sisco were going to give a wounded soldier and his family a new home that night in front of a record crowd in Lexington’s Rupp Arena. General Sisco has given over 300 homes away to soldiers and their families. He has given them away at a Dallas Cowboys game, at other prestigious events and at every George Strait concert this year. He is passionate about helping these heroes and he also is on the board for the NRA among his other activities. Aside from that, he’s a good man and a super friend.

My wife Amanda, sons Gus and Luke and mother in law were in town for the weekend and I met General Sisco at his hotel prior to the concert. Our six year old son Gus was so excited to meet a three star General and he’d often heard me talk about General Sisco. I gave the General his bow in the lobby then we posed for photos. It was a fun time and then he took the bow up to his room so we could leave for the concert. My wife, mother in law and our eight month old left Gus and I to ride with the General to the concert. When we got there it was packed and I told Gus to stay three feet from the General through the crowd. He never let General Sisco more then three feet from him the whole time. He grinned when we finally got to a backstage elevator and said, “Dad, I stayed right with the General..”

To see the wonderful things Gen. Sisco and his group are doing for our heroes please go to: Military Warriors.

Gus and I found our seats and enjoyed the show. George Strait is a fantastic entertainer and my family’s favorite singer. Mid way through the show George Strait invited General Sisco and the wounded warrior hero and his wife onto the stage. It was so quiet you could hear a pin drop as they made the presentation, giving the couple the keys to a new home, a year’s worth of groceries, and a new flat screen TV in front of the packed house. This particular warrior had been in a fire fight and also stabbed, and was recuperating from his injuries and surgeries. He normally was in wheel chair but went across George’s stage on crutches… what a hero. There wasn’t a dry eye in the room, especially General Sisco and George Strait. It was a very touching ceremony and the audience chanted “USA” as the hero and his wife left the stage. General Sisco works tirelessly for these men and women who’ve given us so much and yet expected nothing in return. They truly deserve these homes and it’s very touching to see in person.

I knew that very moment that I’d made a good decision giving the General the 3rd bow, especially given that he was a three star general. Another coincidence, he lives in Texas. So all three of my stage bows that are missing from my collection are in Texas. All three men that have them are cut from the same cloth. They are strong, fierce leaders yet compassionate about helping their fellow man. They all three exhibit traits you see in a hero such as loyalty, leadership, strength, and each is a positive role model. I am very proud that they are each a friend, I admire each one, and I pray that they will continue to be who they are and I hope my sons will follow their tracks.

That’s the latest for now. Until next time, Adios and God Bless.