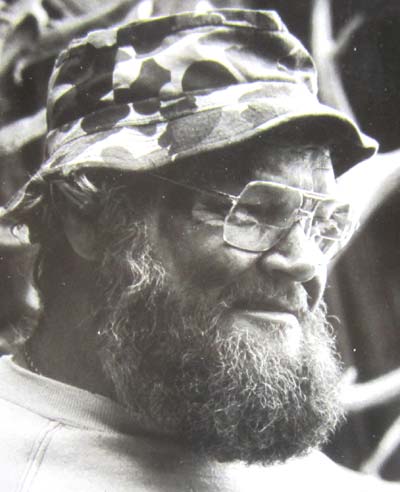 It with great sadness that we say good-bye to another friend. Archery’s Gentle Giant Don Clark, father, husband, industry great and friend. editor

It started with a phone call more than 40 years ago.

“You must be a bowhunter,” said the voice on the other end of the line.

“Guilty as charged,” I admitted.

Thus launched a long friendship and eventual business partnership that would last until March 17, 2013, when my good pal Don Clark died at age 79 from complications of pneumonia. Back then I was the brand new Communications Manager at Magnavox’s Government & Industrial Division in Fort Wayne, Indiana, and Don was an engineer in the Anti-Submarine Warfare department. He’d called my office shortly after seeing a cover photo I’d chosen for the Magnavox Management Club’s monthly newsletter. It showed a woodland scene of a camouflaged bowhunter ready to release an arrow at an unseen deer. “Don’t Miss the Management Club’s Next Meeting,” advised the headline accompanying my photo.

An avid archer himself, Don and I soon met. He introduced me to his good friend, co-worker Bob Schisler, another engineer in the Magnavox ASW department. We three shared a common passion, shooting and hunting with our bows and arrows. We were all members of the Indiana Bowhunters Association and soon formed a field archery club for Magnavox employees, with tournaments held at the Isaak Walton Club grounds north of Fort Wayne. That same archery club later evolved into the Tisepe Bowhunters, one of northeastern Indiana’s oldest bow clubs. In due time, Don, Bob, and I all became honorary life Tisepe members.

But Don’s phone call and friendship resulted in an even more enduring monument to archery. In early 1971, Don, Bob, and I – along with Magnavox graphic artist Steve Doucette – founded Blue-J, Inc., Publishers. In August of ‘71, after months of careful planning and preparations, Bowhunter magazine was born. Its initial press run was 15,000 copies distributed mostly on newsstands in Midwestern states where deer hunting is popular.

I was Editor, Don and Bob sold ads and handled circulation/subscription chores; Steve laid out each issue for printing. It was a winning team, made even stronger when Fred Wallace, an Ohio bowhunter and salesman, joined us a couple of years later. Saying Bowhunter was a successful special interest publication is a gross understatement. At its peak of popularity, the paid circulation hit 220,000 with bimonthly copies and three special issues printed and read by legions of devoted fans. What started as a part-time business became a multi-million dollar publishing company built on friendship and a shared interest in bows and arrows.

Don Clark’s contribution to the magazine cannot be over-emphasized. For years Don and wife Pat were the public face of Bowhunter magazine, attending countless clinics, trade shows, archery shoots, industry gatherings, and club events. They traveled widely and routinely manned the Bowhunter booth, selling magazines, books, calendars, and a variety of other Bowhunter items to the crowds attending these events.

Don later played a leading role in the Archery Hall of Fame, working with Dave Staples to help make Dave’s dream of a permanent AHOF home and museum come true. I was especially pleased when my old friend did honors at my own Hall of Fame induction ceremony in 2003. Remembering that special evening and the many bowhunts Don and I had shared, was golden, as were the multiple Pope and Young Club conventions we attended starting in the 1970s, and the fun times spent together in the company of our growing families.

After we finally sold Bowhunter, Don realized his and Pat’s dream of building a lakeview log home on their rural property near Angola, Indiana. There Don enjoyed hunting in his woods and watching the deer and other wildlife, spending his retirement years in the company of family and friends.

Not that there weren’t troubling times along the way. For a big, bearded, gentle giant of a man, Don seemed plagued by a variety of health issues. He underwent the first of two heart bypass surgeries in his late 40s and was a cancer survivor. A couple of late life surgical mistakes resulted in more serious problems and Don also suffered from Parkinson’s disease. Worn down by these physical ailments and advancing age, he died peacefully surrounded by the people who loved him most, his wife Pat and daughters Mary, Kathleen, Donna, Michele, and Kristen. Married for 52 years, Don and Pat were the proud grandparents of Zach and Lily.

Standing beside the plain wood casket containing my friend, I was struck by the look of peace on Don’s face. Dressed comfortably in jeans, a flannel shirt, and a favorite leather vest – wearing his familiar turquoise bolo tie, oversized belt buckle, and complementary jewelry, he was the outdoor-loving Don Clark I remembered. A favorite Bear take-down recurve bow lay atop the pine coffin. A quiver and hunting arrows, leather arm guard, shooting glove, and bow stringer were all within easy reach at Don’s side.

How fitting, I thought, that these well-used personal items would spend all eternity with an outdoorsman and serious archer whose love of bowhunting will transcend death. They’ll be readily available for the new adventures awaiting Don in that perfect hunting grounds beyond the stars. So rest easy, old friend. While we’ll miss you, we take comfort in the knowledge that you’re finally at peace and in a far better place. I’ll see you again somewhere down the trail.

Scent: How It Carries