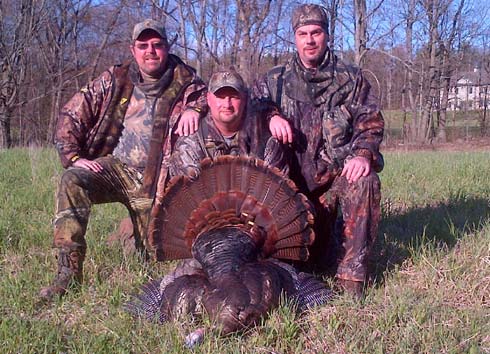 Before opening day of the Ontario 2012 turkey season on Wednesday April 25th, four of us were fortunate enough to have had two full days of scouting and planning. Jeff Duffin, another turkey hunting companion, had to work on the Monday and Tuesday, so he couldn’t scout with us or move into the hunting cabin until Tuesday night. Rob Donohoe, Jeff, my Dad Frank and I have stayed at our hunting cabin and chased turkeys for many years now.

Frank and I always hunt opening morning together, as do Jeff and Rob. After the morning hunt we always meet up somewhere and switch to our backup plans, depending on how the early morning setups went. This year my Dad’s friend Brian Cosby joined us for the scouting trips, but Brian was staying at his house a few miles north and hunting on his own property opening morning. The four of us spent the two days prior to the opener putting plans in place for five guys on opening day.

It was a lot of fun discussing strategies, driving from farm to farm and scouting. We roosted birds on about 6 different farms. I also like to locate mid-morning and afternoon strut zones for backup spots if the roost hunt doesn’t work out. You never know what April weather is going to bring, so we setup three Ameristep blinds in some good heavy traffic areas. All and all it was a great time and a very successful two days of scouting with primary and backup plans in place for five hunters.

The evening before opening day is normally very loud at the cabin. Everyone brings out the new as well as the tried, tested and true old turkey calls for an evening of calling practice and fine tuning. There is always a discussion in regards to what stage of the breeding cycle the turkeys are in so that calling strategies can be adjusted accordingly. In 2012 the spring was so early that some of the hens were getting bred in mid-March, so with breeding starting so early, we anticipated the Toms being very receptive to the sweet sounds of a hot hen.

Normally we have a big pot of venison stew simmering on the stove the day before, so it makes for a quick and easy lunch the next day; that way we can get back afield quicker for the people who didn’t burn a tag in the morning. With all the preparations complete and the plans in place for five men on opening morning, we decided to all meet back at the cabin for lunch and see how we did after the morning hunt.

I said to Rob late that evening “so how many birds do you think we’ll take in the morning”? Rob said ‘I’ll bet four’, and I said “I’ll bet three”.

My Dad and I were hunting on the block east of our property so we were in our blind with time to spare before sunup; the birds were already gobbling on the walk to the setup. We were between two roost sites and a long away from each roost. This was a great travel corridor where we kept seeing the birds strutting in the morning so we anticipated a couple of hours sit. The turkeys roosting to our west, were on another farm on our block and the landowner was hunting them.

But the turkeys to our east were hammering my calls so we banked on them traveling our way first. It was quite disappointing when the gobbles to the east kept getting fainter. Then, all of a sudden, on the wooded ridge to our west, we heard a thundering gobble, Dad and I lit up like kids in a candy store. We found out later that the landowner hunting on the farm next to ours bumped the birds off the roost. The Tom decided to cross the road to where we were hunting, but was hung up on the wooded ridge and I would have to talk him down the hill and into our setup in the open field. He was still a few hundred yards away, but was really liking what I was saying. I went quiet for about ten minutes and he did what I was hoping for; he started gobbling on his own. The next calls he heard were a lot softer and angled away from him; this seemed to do the trick because his gobbling was getting closer.

When we saw the lone full-fanned gobbler hit the field roughly 100 yards away, my Dad, as always, deemed himself the primary shooter. I started pulling the string on our strutting Tom decoy, to get our decoy doing the mating dance behind our two hen decoys; this caused the big Tom to start jogging while in full strut, right into the decoy setup. Dad waited for the right moment and put the smack down on him. What a great hunt!

We tagged the Tom, packed up our gear and made the forty minute drive to our good friend Murray McCleary’s place; one of my favorite farms to hunt.

The setup I picked was with our backs against thick woods on a big knoll in an open field and then another big field with a sugar bush behind it. It’s so beautiful; like a bowl with four connecting fields in the middle, with woods all around the top edges. I switched to using just two hen decoys for this setup and put them on top of the knoll in the open field. I was well hidden under a cedar tree just off the field’s edge and Dad was behind me in the woods.

Roughly ten minutes after we setup, I thought I caught the sound of a distant gobble interrupting my calls. So I cut at him on my Quaker Boy Old Boss hen, and there was no doubt that he was over across the two fields in the Sugar Bush. I could just barely see him strutting and gobbling back and forth just inside the woods, honoring my calls but refusing to commit to me. We couldn’t move on him and leave our cover without being spotted. So I told Dad to drop back about 70 yards further in the woods and suggested that every time I called, he should do the same back at me. The first time we did this, the Tom gobbled, left the woods and very slowly started moving in our direction.

He had to travel close to 800 yards across two open fields, through one fence and up a large knoll, to arrive at his demise; and this was one relaxed, slow moving gobbler. Every time he would put his head down to feed, I would throw my calls back towards Dad, Dad would respond and the Tom would gobble, strut, then move closer.

This is one of my favorite types of hunts; when you can watch him come from that far off and gauge his responses to your calls. When he arrived at the bottom of the knoll, he left my field of vision and I knew the next time I would see him he would be in range; does that ever get your heart going and your eyes bolting back and forth. I even started to wonder if he had snuck out the back door, but there he was in all his glory, puffed up and strutting his stuff. I came to full draw and let him have it as soon as he turned his head a little to the side. Dad came rushing out of the woods with his thumb up in a questioning type manner because he was unable to watch any of the proceedings; but he had been very instrumental in the outcome. The 20 pound Tom fell victim to a good team-calling effort.

Everyone arrived back at the cabin before 11:00, and we found that we had four mature Gobblers for five men.

Brian’s initial setup had failed him but when the flock headed east, dropping over a hill, Brian managed to pull off a difficult successful stalk. His gobbler was the only one of the four that weighed less than 20 pounds, but was very likely the most mature Tom with the longest beard and biggest spurs. Jeff bagged the heaviest gobbler at 22 pounds; after his and Rob’s flock skirted by them just out of range, Jeff’s bird couldn’t resist a peek at their decoy setup and, lucky for Jeff, he broke away and came by his side of the blind.

After a bite of lunch, a brief celebration and the sharing of our stories, Jeff, Rob and I were on our way to get Rob a bird. Our first setup, yielded a single courtesy gobble, but we had no takers that would commit to us. On the other hand, the woods were a good place for a brief afternoon nap. We packed up after a few hours because our destination was where Jeff shot his Tom in the morning and we wanted to be there before 16:00.

Arriving at Ken and James Sager’s farm, it was nice not to see any birds hanging out where we wanted to sit. For the late afternoon hunts here, we like to sit on the opposite side of the field where we had put the blind Jeff shot out of in the morning; they seemed to approach the roost more from over there. We had a triangle setup; Rob was at the head of it on the field edge, with Jeff and I back behind him in the woods doing a tag team calling routine to pull the flock into him.

The birds were working well and we had only been sitting for about twenty minutes. They were coming from the direction we hoped, but mysteriously, they hung up just out of range and then left. I did a quick reposition, moving further back and closer to the field. The Toms started responding again within fifteen minutes of their departure. This time the gobblers didn’t hang up and came down the field edge right into Rob’s lap. I have a lot of confidence in Rob’s shooting and so did the big Tom when it was all over.

For me, the excitement of Turkey hunting opening day is very difficult to match. We have had many great opening day turkey hunts but this one definitely ranks right at the top. The buildup to the start of the season makes it very easy for you to be left disappointed at the end of the day. We do so much scouting, planning and purchasing new and improved turkey-hunting items that it is easy to have the wind taken out of your sails if it doesn’t work out; BUT NOT IN 2012.