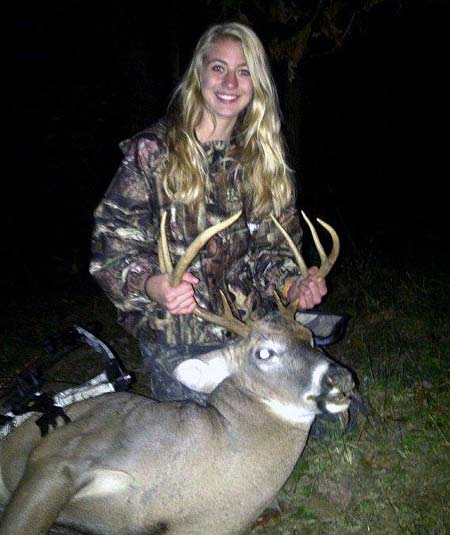 Taylor Tretter tagged her first whitetail this past October while hunting near her southern Indiana home. The smile on her face says it all: The animal doesn't need to be a record book buck to be a true trophy.

CHANCES ARE GOOD, after more than half a century of serious bowhunting, I’ll never tag a World Record big game animal. Odds are you won’t either. But so what? To my way of thinking, any animal legally taken under the rules of fair chase is a true “trophy.” Here’s why.

Last fall the 15-year-old daughter of a Hoosier friend took her first buck with a bow and arrow. Taylor Tretter has shot a bow for years and hunted for several seasons without getting a shot. That all changed abruptly last October when Taylor put her new Mathews compound to good use.

Sitting in a treestand overlooking a picked cornfield, she saw a doe cross the field and disappear into the woods beside her. Moments later a nice buck followed the doe’s trail, pausing to freshen a scrape only 15 yards away. “I concentrated on the kill zone,” Taylor recalls, “And let the arrow go.”

The shot was true. The buck jumped, spun, and ran away. But he dropped within 60 yards. “I was shaking so bad,” Taylor confesses, remembering the adrenaline-charged moment. “It was a moment I’ll never forget.”

While her whitetail wasn’t large enough to land in the Pope and Young record book, it really doesn’t matter. Moments a bowhunte can never forget are what hunting is all about. Believe it!

In my own case, I could cite dozens of similar unforgettable moments. Take my moose hunting adventures, for example. During the 1990s, bowhunting Wyoming, Alberta, and Alaska, I arrowed three Pope and Young bulls on as many hunting trips. But one do-it-yourself Montana moose hunt not far from our Whitefish home, really stands out. The bull wasn’t much to look at, really. He’d broken off one beam and palm during a fight for breeding rights. This alone was more than enough to preclude entry in the archery record book.

No matter. I voice-called and the bull passed by within point-blank range. I shot him at about three yards when he shouldered through the branches of a low-limbed pine tree where I crouched, my back pressed against the tree’s trunk with a video cameraman kneeling just behind me. The bull fell dead within 50 yards. All of the pulse-drumming action was captured on tape and later broadcast on Bowhunter Magazine TV. The fact that cameraman Jim Van Norman was there, and good friends Marcus and Lois Nichols were also sharing my hunting camp to help me scout for and locate stalkable bulls, made that hunt extra sweet. The fact my Shiras bull wasn’t a record book trophy didn’t detract from that magical experience.

Speaking of record book trophies, I’ve been a volunteer Pope and Young Club official measurer since 1978.  Over the years I’ve pretty much seen it all when it comes to the reaction of proud hunters hoping their trophy is large enough to wind up in the P&Y listings. I’ll never forget one rainy day when a deer hunter drove nearly 100 soggy miles so I could score a very nice whitetail he’d arrowed. Unfortunately, the tale of the tape ended with the buck’s rack only a few tenths of an inch under the minimum qualifying score for entry into the records.

When I broke the disappointing news, the hunter simply shrugged his shoulders. “No matter,” he said. “He’s still a trophy to me and that’s all that really matters.”

Compare that reaction with guys whose bucks made the record book with inches to spare but nonetheless were obviously upset because the racks weren’t as big as they’d been told or had hoped. One guy who called to set up a measuring appointment had mentioned his deer was “One of the largest bucks” his buddies and taxidermist had seen coming out of his hunting area. When he arrived with the rack, one look told me it was a good buck but hardly super buck quality. Though I didn’t say a word about its size, the hunter took one look at the mounted bucks hanging in my memory room and muttered, “Guess he’s not as big as I’d hoped.” And even through the deer scored in the mid-140s, the hunter was obviously disappointed. That’s a pity.

My point is a ‘Trophy’ can be an animal of any size. Tell a youngster or beginning bowhunter the doe he or she’s just tagged isn’t a trophy deer. Makes no sense to me and it shouldn’t matter that much to you, either. If it does, I suggest taking a long hard look at what’s really important. Sure, a monster buck or bull is a trophy most bowhunters dream of. But any animal can mean just as much to any proud hunter whose trophy means something special.