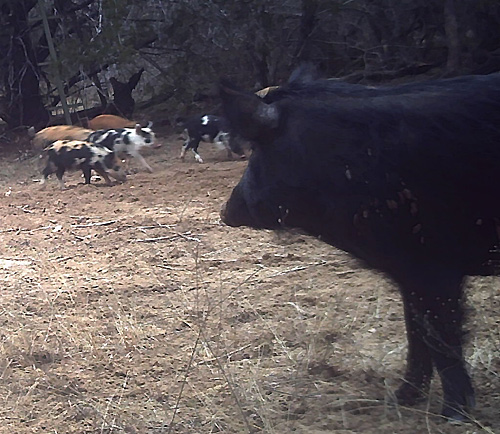 I wanted to check out an area I call the Hammer Hole that is in the far back of the 1,000 acre property I hunt. The last time I had a Spypoint trail camera back there was in February. When I looked at the pictures there were over 500 pics, most being at night. But there were daytime pictures, which is what we’re looking for.

Here are 4 pictures that are representative of the lot. There were several deer, both bucks and does. This buck came through several times. 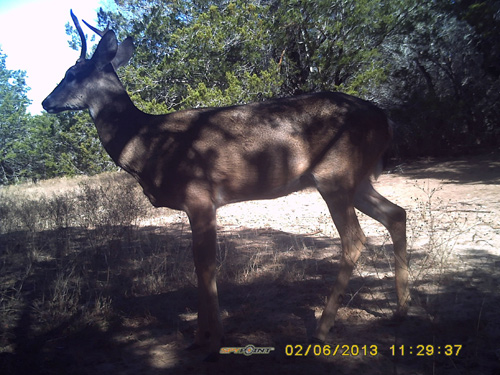 Here is a nice buck and counting his crab claw he looks to be a 10 pointer. His neck is slimming down and so is his body. 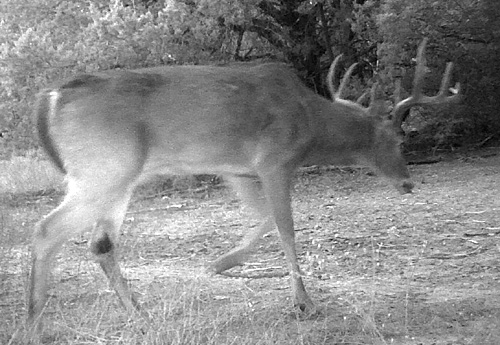 The Hammer hole area is near the end of an old 2-track farm road. I set my Spypoint where it is watching some trails that cross the road. This black hog crossed north to south on February 18. 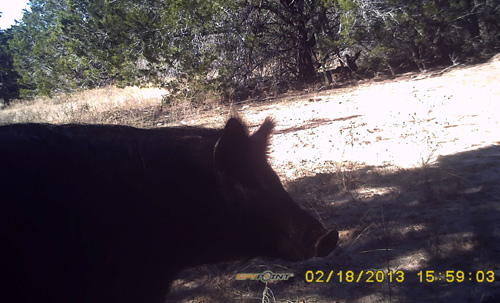 An hour later some hogs came out of the woods to the south and crossed the road going north. 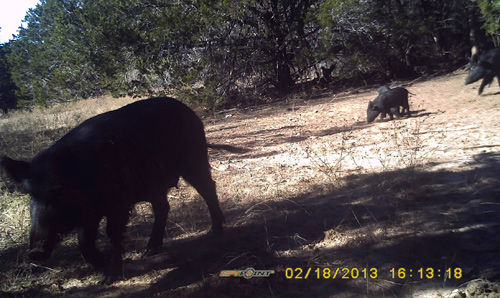 And here are some south to north hogs from Feb 20. We have several sizes here, youngsters to mature. 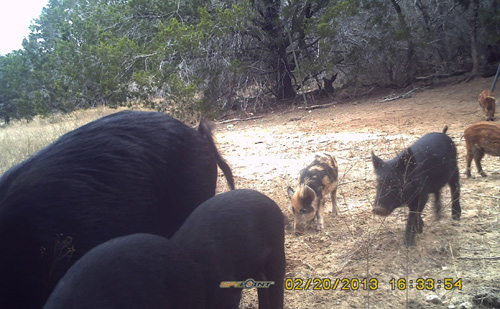 Armed with the information that there was wild hog traffic at the Hammer Hole area I wanted to hunt there.

Collin Cottrell came over and we drove to the Point and set up a Primos Double Bull ground blind and Collin got inside it. I continued on to the Hammer Hole. I have 3 tripod stands in the Hammer Hole area and the one I planned to hunt would have me in the action if some wild hogs came through like they did in the above pictures.

First I got the SD card from the Spypoint and inserted a new card. Then I climbed up to the tripod seat and got situated. I got out my camera so I could take a few pictures of the area.

Rats, the camera battery was dead.

I took a pic from the stand, looking through a cedar tree in front of the tripod at the thick woods on the opposite side of the old road. 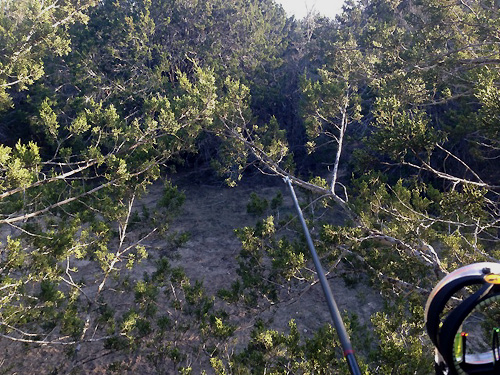 An hour later I heard faint hog grunts and squeals in the brush behind me. A bunch of small hogs came out of the woods. Three mature hogs were with them.

They came from a trail right by my Spypoint camera and it surely had taken pics of these hogs. I wondered if any would be usable.

A wild boar came out of the brush on the other side and approached the group of hogs. He made a quick charge and the young pigs scattered. (And the Spypoint got a pic of that too.) 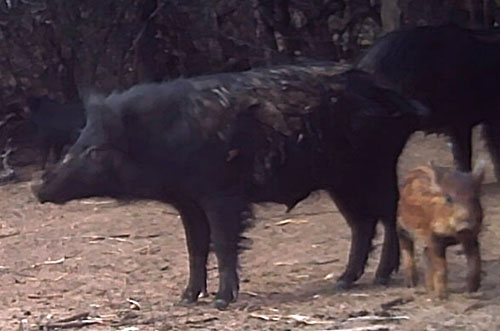 Things were coming down good. I drew and put my top pin on the boar’s vital area … and shot. The other hogs ran into the woods and disappeared. The boar ran along the edge of the trees for 15 yards and stopped and looked around for half a minutes. Then he wobbled and walked slowly into the edge of the cedars and stopped again. He laid down.

Half an hour later I climbed down and eased over to the last place I had seen the boar. He wasn’t there now.   The next day he was down for the count 60 yards away.

Meanwhile Collin had heard plenty of gobbles as well as some wild hog noises.

We decided to have a work day and check out some areas and get set up so we have more places to hunt the wild hogs.

My bow is a 2013 Empire from Bear Archery in a Shadow finish. One of the smoothest bows I’ve ever drawn and shot, it’s an enjoyable bow to shoot and practice with. It’s set at 60 pounds and has plenty of speed and hitting power. My shot clipped some bone on the bottom of the spine so I didn’t get a pass through. And 60 yards later the hog was down.

A hit like this is exactly why I like a broadhead that makes a big cut. The Grim Reaper Whitetail Special gives me just that. It’s a 3 blade expandable that has a 2-inch cutting width and a cut on contact tip. It is a tough broadhead too, tried and proven on bear, deer and wild turkeys.

My camo is Sticks N Limbs. There were plenty of wild hogs running around within 20 yards of me and nothing picked up on me. The contrast between the limb patern and the background of the Sticks N Limbs design breaks up your outline better than any other camouflage on the market.

The arrow rest was a Trophy Ridge Revolution. It incorporates both of the technologies that changed recent archery, it is a Full Containment rest and a Drop Away rest. I started using this rest during deer season and it shoots QUIET … and accurate.

The bowsight is the Cypher 3 from Trophy Ridge. It is made from a Ballistix CoPolymer and is stated to be as strong as aluminum but 25% lighter. A particular feature I really like is that the sight has Tool-less Windage and Elevation Adjustments. I’ve never had a sight that is so easy to adjust.

I used my favorite peepsight, the Whisper Peep with tubing.

I like the the Beacon bowquiver from Trophy Ridge. It has a unique features I really appreciate. The hood has 3 powerful green LED lights encased in the top. So this quiver has been  a flashlight on the way to many a stand as I hunted this fall and winter. There is no fumbling around in my day pack for my flashlight, or forgetting it, because I always have my bow.

During deer season I started using  Wings #599 ED binoculars from  Alpen Optics. They are smaller and lighter than any binocular I’ve ever used. I got the 10 power ones and they are clear and easy to focus. Another plus, they fit in my front pocket so I always have them handy.

My carbon arrows are the VAP from Victory Arrows. They shoot true and are tough and get excellent penetration. I used yellow arrow wraps from Bohning Archery. The fletching is yellow Opti Vanes from Goat Tuff Products. It’s a 2-inch vane and shoots great. I fletched the arrows myself with the fast, easy to use EZ-Fletch MINI from Arizona EZ Fletch.