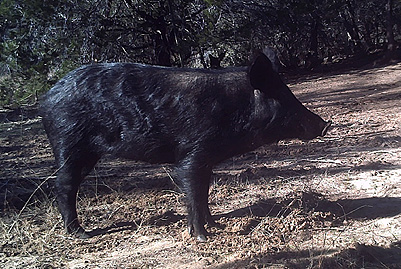 On our 3rd wild hog escapade I dropped Collin Cottrell off at the Point and he got in the Double Bull ground blind we had put there. Meanwhile I quickly set up a Spypoint trail camera. 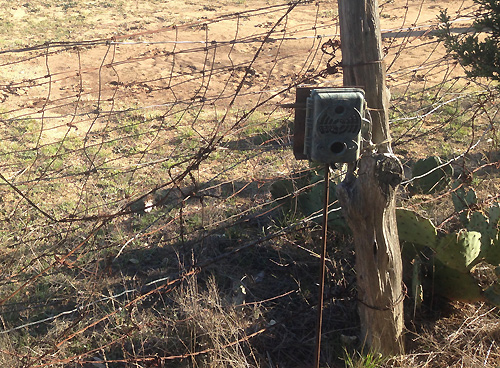 Then I took a pic at the area the camera is watching, a dividing fence that separates two pastures and also funnels deer and other wildlife to the Point. 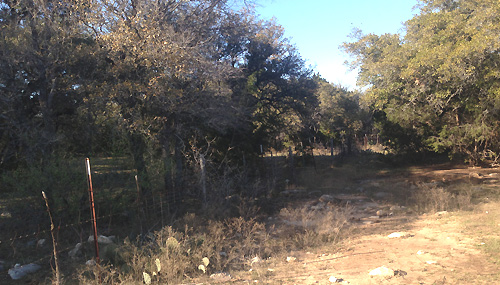 When I was half a mile away Collin texted me he could hear gobblers sounding off in the area to the north.

I continued to the Hammer Hole area. Once again I had picked up the SD card from the Spypoint there. Here are a couple of pictures that the camera took. This one is a mature porker that came through at night. 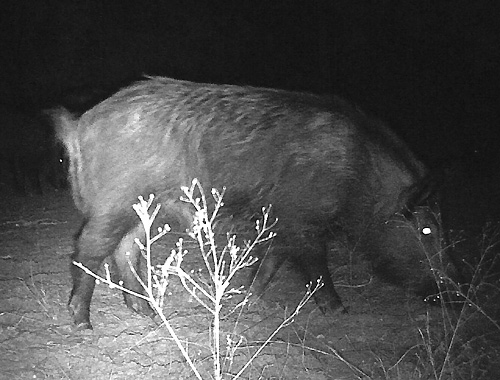 But what I’m really interested in is pictures taken during daylight. And about half were. Here is one. A group of hogs of different sizes got caught in a digital pic, 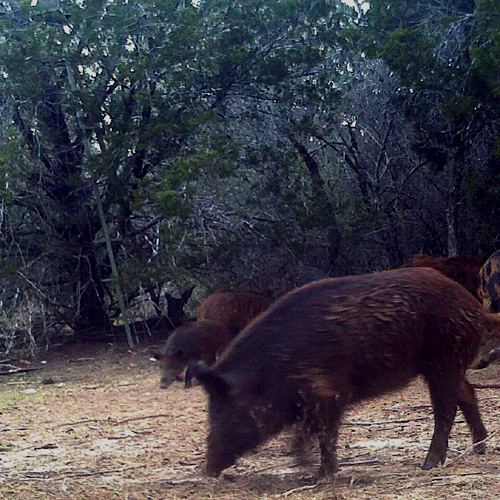 The next day a different group was around. They are tearing up the place. 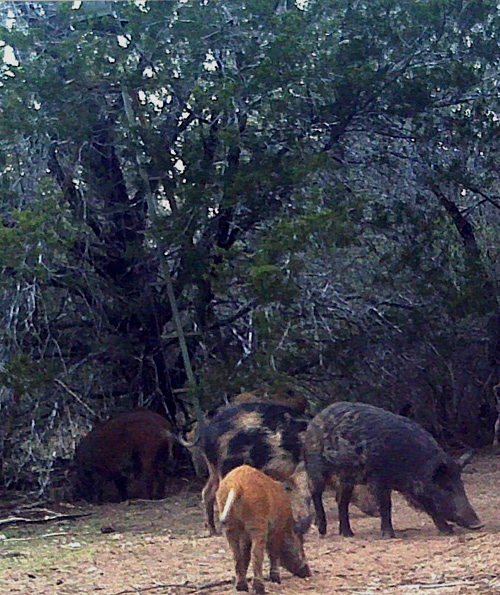 Notice the steps in the cedar tree behind the wild hogs. That is the 2nd tripod that is at the Hammer Hole. And for today’s hunt I got in this tripod.

Time passed and I began hearing hog growls and squeals in the woods in a couple of areas in the distance. Soon I heard faint movement sounds behind the trees right in front of me. I leaned forward slowly so I could see what it was.

A black hog turned around and stealthily went further into the woods to the south. And I’m not talking about any hog, this wild boar was enormous. Surprisingly he didn’t make hardly any noise as he moved along but he was so large that I caught lots of black hog parts through the dense cedars as he stopped 15 yards away and stood quietly.

I’m still amazed that a hog so huge could move along, almost dreamlike as if he was floating through the woods, and super quiet too, especially here where the brush and trees are so thick.

Before long wild hog sounds got my attention again and I listened intently to see if they were getting closer. Soon I heard walking in the thick woods to the south.

A different big hog took shape on a trail leading right to me. It stopped, another huge boar, at least 6 foot long. He was very big but definitely a step down from the monster that had been here earlier.

The boar ripped up a dried-up tree trunk that was laying on the ground. It was loud. I waited, bow in hand for a chance to shoot.

In prior years I’d cut shooting lanes to cover that exact place and I’ve shot several hogs there. But cedars are always growing and there was no shot possibility now.

Deep grunts sounded close by, about where the monster had been at first. I thought, “this can get real good.”

The 6 footer reversed ends and trotted back the way he came. I never heard another sound from, nor saw the other hog. But from the way the boar had checked out I’m thinking it might well have been the first hog I saw.

Daylight faded fast and before it was all gone I got down and went to my pickup.

Collin had listened to more wild turkeys that came through his area and he also heard wild hogs making noises but he didn’t get any hog opportunities.

We drove to Storm’s Hamburgers and while we slammed down a couple of Storm’s Specials we decided to have a work day. I wanted to move my tripod back into the trees, behind where the 6 footer had been. And we wanted to set up a couple more places where Collin can hunt.

When I got back home I screwed my bow up a couple of turns.