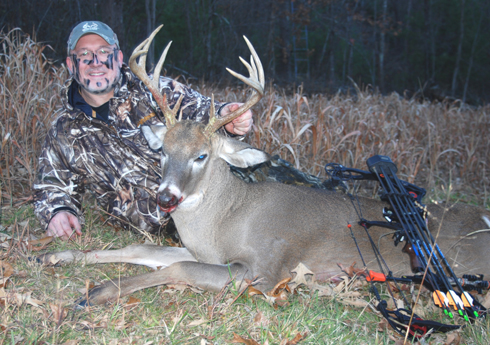 2012 marked the beginning of the third year on a small hunting lease that we have. Jim, my husband, and I have worked hard on this property to bring in more wildlife and keep them coming back. This year we decided to use Heartland Wildlife Institute seeds and supplements. We had talked to Chris Hartman at Heartland and she steered us in the direction of supplements and feed we needed for our plots.

We planted the Winter Survival and the Annual Wildlife mix which includes sunflowers, sugar beats, forage peas, brown millet, buck wheat, soybeans, pumpkins, turnips and corn. We also used the Whitetail Antler Magic supplement, which is now the site of a large crater where they have pawed out the ground for more.

We planted in May and both the Winter Survival and the Annual Wildlife mix was up and growing in a little over a week. We had good rain after we planted which made a huge difference. Within a month it was growing well and with the aid of the trail cameras we could see that the deer and turkey were already enjoying the tender vegetation.

When archery season opened Jim and I were on the road hunting in other states. I was able to hunt more than Jim during archery season here at home but had no luck. The weather had turned hot and dry and nothing was moving expect very early and very late. The trail cameras showed we had several small bucks, lots of does, spikes and four points and a good seven point buck moving through on a regular basis, We also had plenty of turkeys coming in daily.

As season moved closer to the end of archery season Jim still had not been able to hunt on this property due to work and our schedules. I was able to go several times a week before and after work but still had no luck connecting on a whitetail. We were hoping to harvest a few does this year to help balance the herd that we have. The doe ratio is very high and they are great table fair.

As archery season neared the end it looked as if Jim would only get to hunt the last few days. The wind was wrong for a morning hunt where his tree stand is located so we went in early for the afternoon hunt. We had discussed where we were going to sit and he really wanted me to hunt his 20” Gorilla Big Fella tree stand. I had not hunted his stand due to the fact that I usually hunt in the morning and it is not a morning stand. I decided to hunt from a ground blind which is nestled under a huge pine tree about 20 yards off of a path the deer and turkey use to go to the food plots. Jim headed to his stand and we were both settled in by about 2:30 in the afternoon. Jim has only sat this stand four times in the last three years. Deer are always around it. Today was different, the wind was perfect and the rut was on!

The mornings were cool enough to where I had been using my ThermaCELL Heated Insoles. A great product if you live in an area where it gets cold but this afternoon the weather was sunny and in the 70’s which was warm for November. I had a swirling wind where my ground blind was located and as usual, we had used our Wildlife Research Center Scent Killer regiment. Scent Killer has proved time and time again to work no matter the wind. Jim said that the wind was calm where he was and his ThermaCELL was all that was keeping him from being devoured by the mosquitoes.

The afternoon was less than boring, I had a flock of about forty turkeys come in and they are always amusing to watch. There were two bearded hens with the group and I hoped would be here in the spring. Bearded hens are legal to harvest but we only have a spring season. The squirrels were busy as well and we have a bumper crop of them so again the herd needs thinned but not on the last day of whitetail season.

As the afternoon wore on the wind continued to swirl in every direction.

I sat motionless, scanning the area in hopes of some whitetail activity. The wind was blowing just enough to muffle the sound of deer walking through the crunchy leaves and about 4:30 I heard something to my right. I slowly leaned up to see if it was a deer but it was not, it was Jim? He walked very slowly down the edge of the wood line about 80 yards from me. His stand is on a ridge in a saddle and I figured he was headed to another stand that we have that is in the bottom of a ravine due to the wind. He never changes stands especially with it being so close to prime time. So I sat there and wondered exactly what was he doing.

After about 10 minutes I heard something walking my way, it was coming from my right and I slowly leaned up with my Mathews Z-7 Magnum in my hand and ready to pull a string on. As I looked carefully out of the blind I couldn’t believe my eyes, it was Jim again. He saw me looking at him and he raised his Mathews Extreme over his head and said “I just killed a Big Buck! I had not seen him that excited in a very long time. I almost tore the blind down trying to get out.

When I got to him he was shaking like a leaf and all he could say is “I can’t believe it, he is a big deer for this area!” I ask him if it was the seven we had on camera and he said “No, we have not seen this buck before!” He had tracked it a little way with a great blood trail that the Muzzy M-X 3 100 grain had delivered on the end of a Carbon Express Blue Streak 250. He said he wanted to give the buck some extra time, calm down and come get me so we could track it together. He was a wreck; he was shaking so hard he could barely talk.

We went back to where he had shot the deer and it was only about 25 yards from his stand. He said the wind was perfect and it was very thick where his stand is located. You have to really rely on hearing them walking because they are on top of you before you see them. He said that he saw movement from his left and took his bow off of the Real Tree E-Z hanger and slowly stood up. Jim checked his sight to make sure it was locked down and his arrow was loaded. He had his release already on the string and was ready to draw. He figured it was a doe that had been coming through about this time every day and was going to harvest her. As he stood there watching for the deer he saw antler’s and not the four point, the seven or the spike, no this was one of the big boys that people had been talking about.

Jim drew his bow and waited for the buck to step out from behind the big pine. The buck took the two extra steps needed, then after looking around relaxed and began to feed in the food plot. Jim squeezed his release and the arrow took flight. The buck just stood there for a few seconds and then trotted off through the food plot and down into the wood line, never realizing he was hit. Jim sat down and wondered if he missed due to the buck’s reaction. He waited about 20 minutes and climbed down, went to the spot he had hit the deer and saw the blood trail. He had made a great shot with an excellent blood trail to follow. That is when he came to get me to help him track it.

As we followed the blood trail it didn’t take long before we found the buck, he had not traveled 70 yards from where he was shot. Needless to say we were both thrilled when we got to him. He was a big nontypical eleven point that we had not seen on camera so figured he must have been cruising through. He was a big bodied deer for the area and all Jim could do was stand there and say “Wow, what a buck”. We laughed, cried, hollered and hugged, happy that all our hard work had paid off. It is such a sweet deal when you know that all that you have done to improve a lease has paid off and that you are the ones that earned it.

After we calmed down we realized that we had to get this whitetail out. We have hauled many deer out of the woods over the years but you have to understand that where we live, there is no flat ground. He had gone about half way down an embankment and all I can say is ‘Thank goodness for antlers’. So the work began with us dragging him out. We estimated the big buck weighed about 175 lbs but by the time we got him to the top of the embankment we re-estimated him to be about 400lbs.

We got him back to the food plot where we could get a good look at him. No ground shrinkage at all. Jim just sat there looking at him and still all he could say was “Wow” what a buck. I never expected to harvest a deer like this off of this lease”. You have to understand where we live there are no 200” class deer. We live in an area where hunters think if it’s brown it’s down. Management programs are not a big thing here to most hunters and we knew it would take years of managing our property before it would produce larger bucks, but somehow this one had been a very smart old boy to avoid being harvested. We guessed him to be 4 1/2 years old.

We know that the Heartland Wildlife Institute seed and supplements were the key to our success, it brought in deer all season. We will also be feeding the Rack Maker pellets over the winter and spring. We can’t wait until next season to see what is drawn to the plots. One thing that can be said, the proof is in the pudding or the food plots as we say.

Addition: All food supplements must be void of all hunting areas 30 days prior to hunting season