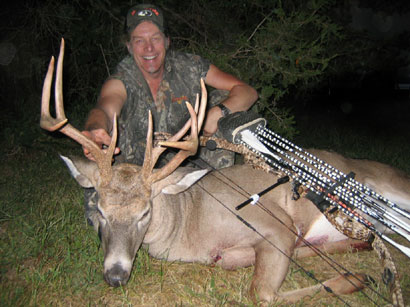 Kid Rock called and asked if I would teach him to bowhunt. He said Jerry Lee Lewis had taught him how to rock the piano, so he would accept only the masters to light his way. Who’s he gonna call? Tom Petty?

As one of the world’s most talented and successful performers, I knew better than anyone how important it was for my friend to escape the mayhem of rock-n-roll and cleanse his soul with the mystical flight of the arrow. Plus we all know that the more backstraps one personally harvests and consumes, the more intense and soulful one’s music and life.

We were hot and heavy into the October bowseason up in Michigan, and as a fellow MotorCity Madman, Bob made the short trip to our sacred hunting grounds and the archery lessons began post haste.

Already tuned into the joys and marksmanship disciplines of hunting game with firearms, Bob wanted to elevate his hunting to the intense challenge of getting to fulldraw on elusive critters up close and personal, right in their face with a sharp stick.

On cue, Bob produced a brand new bow from his vehicle and told me how his buddy had set him all up with the ultimate gear for his bowhunting quest.

I tried to subdue my predictable fears but alas, the bowhunting industries’ self -inflicted suicidal curse reared its ugly head again. Bob’s nice new bow was set at nearly 80 pound draw weight and though we could draw it back, albeit with much effort and anti-archery gyrations, I took the matter into my own hands, drew it back and let go, dry firing the contraption causing it to blow to smithereens. 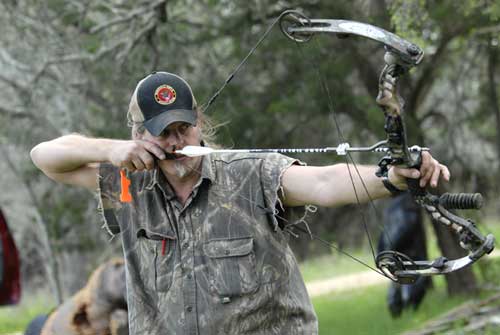 After much explanation, my archery pro-shop buddies whipped out a bow set up exactly like mine with a nice, graceful 50 pound draw weight.

Bob drew this bow back effortlessly and smiled broadly at the graceful upgrade, relieved that it was dramatically better than that other T-Rex killing machine he wrestled with a moment ago.

I tuned him into the basic archery form, mindset, touch and hand-eye coordination routine to get him on target and within mere moments, my rock-n-roll buddy was zipping arrow after arrow into the vitals of our 3D targets. He liked it a lot.

I just so happened to have Don Williams on hand, a highly respected Olympic archery coach and all around “physics of spirituality” martial arts guru to assist Bob with the ultimate fine tuning of becoming the arrow. I sat back and watched Don coaching Bob with his form, emphasizing precision mental focus and repetitious muscle memory.

When Don removed the sight pins from Bob’s bow, positioned him five feet from a large bale target with a small black dot in the middle and had him repeat his shot procedure over and over again, a blinding bright light went off in my head as I recalled this exact same procedure being taught to me by my hero Fred Bear, way back in the 1970s.

With no intention of hitting the black dot but rather concentrating on controlled, repetitious shot procedure while focusing intently on a given minute point of aim, I came to realize that my occasional missing and dreaded target panic hiccups were due to the mistake of focusing on my sight pins instead of the exact, tiny spot I needed to “will” my arrow into.

I grabbed my bow, removed the pins and stood side by side with Bob as we carefully executed killer shot after killer shot.

After a few dozen arrows like that, we re-attached our sight pins back onto our bows, stood back at the thirty yard line and allowed our bodies and brains to celebrate the same exacting archery that we had at five feet but now our muscle memory took over and as we owned the black dots on each target, our sight pins magically floated onto the dot, we loaded our triggers and the bow went off.

Well, Kid was ecstatic, I was moved and I went on to have the greatest bowhunting season of my life, making shot after shot, kill after kill, firing off the prettiest, most consistent arrows of my sixty plus years of bowhunting.

Throughout the season I continue to practice the “blind bale” routine and constantly remind myself that I mustn’t look at the sight pin but always the tiniest of spot on the crease behind the shoulder of my target animal.

When you watch our Ted Nugent Spirit of the Wild TV show on Outdoor Channel this season, watch all those pretty arrows disappearing into unsuspecting herbivores’ pumpstations and know that the procedure outlined here will dramatically upgrade you archery and bowhunting accuracy and joys.

Kid Rock is on his way but sometimes the old dogs have to go back and remember the old tricks. Backstraps are us…

Moon Shine And A Touch Of Camo Go Formal

Moon Shine And A Touch Of Camo Go Formal