Bowhunting the Traveling Toms of Spring 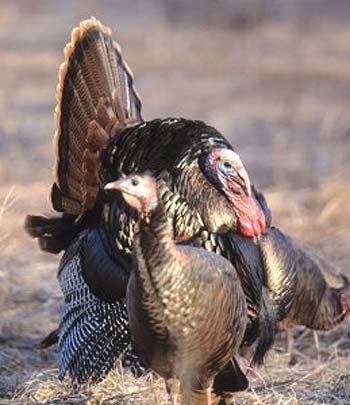 Strutting and courting are done heavily during early to mid morning.

My hunting partner Clay is an excellent caller. So when I heard some ever-so-soft roost yelps from a hen, I naturally thought, “Boy, can that guy call or what. This gobbler is in deep trouble.” The tom just kept hammering with gobbles. The yelps were really setting him off. The hen calls were so soft that I began thinking, “Come on Clay, turn it up a notch.” The gobbler began moving around on the tree limb and he began fluffing and wing flapping in preparation of his fly-down. Just then, a pack of coyotes that had slipped in on the action began to howl within 50 yards of me. Talk about a good locator call. Every time the coyotes howled, the gobbler went nuts with double and triple gobbles. The gobbler finally dropped out of the tree and sailed directly away from me and the coyote choir.

The calling I had been crediting to Clay turned out to be a real hen turkey that was roosted directly above his head. Our plan to bag the tom had seemed flawless. The evening before, we hadn’t even needed a locator call to get a gobble out of the roosting bird. The tom gobbled on his own at dawn, and we had a real live hen coaxing him to fly down in our direction. But it was not to be, and there we were, foiled again after crawling out of bed at 4:00 a.m., just to strike out by 6:00.

The Trouble with Turkeys

The classic way to kill a gobbler is to call him from the roost or slip close as he gobbles, then coax him into the effective bow range. In this day and age, the term “classic” should be replaced with “rare” or “seldom.” A decade of significant turkey hunting pressure has produced an educated game bird. The result: few fools rush in. The new generation of wild turkey toms make you earn your prized gobbler. Here are a few examples that can put a serious crimp in a successful hunt:

To me, photography is hunting with a camera. By observing turkey behavior during the many hours that I’ve spent photographing them, I discovered just how little I knew about the social structure and daily routine of wild turkeys in the spring. Roost gobbling and subsequent fly-down is only a fraction of the activities of this animated game bird.

It didn’t take me long to realize that wild turkey could – and should – be hunted like their fall counterpart, the white-tailed deer. Scouting for feeding areas, bedding areas, rutting zones, and connecting trails are second nature to the whitetail hunter. So why wasn’t I taking the time to scout for spring gobblers the same way?

I found roosting areas, set up my photo blind, and planned out pictures. The photo opportunities were surpassed by the education of the daily routine of spring turkeys that spend their nights on selected roosts, which in my region is usually a large softwood tree. Fly-down occurs when enough daylight lets the turkeys see a safe landing area. No matter how big or small the band of birds, flock organization occurs after all the turkeys are on the ground. Toms gather and begin strutting. The flock hen organizes the rest of the birds through loud vocal assertiveness, and confrontation when needed. The fly-down period and flock organization can be one loud ruckus at first light.

Once organized, the flock heads to the first feeding location of the day. This is when toms and hens begin to break off into smaller groups. Strutting and courting is normally very active during this early period. Bands of jakes circle the area and stay clear of the big toms. The first three hours of daylight see the largest period of mating activity as the flock moves along like a herd of caribou. By mid-morning, most breeding activities have occurred. Hens disperse to nest, and toms begin roaming for unattended, interested hens.

By midday the daily routine will find bands of hens, bands of jakes, single hens near their nests, and small groups and single mature gobblers. When the hens wander away, the gobblers follow them. This wandering period of mid-morning through mid-afternoon will take the splinter groups of interested suitors through other feeding areas, and one of several social centers – the dusting areas for their daily baths. These areas, like early morning fly-down locations, are excellent strutting zones. Daily activities then conclude with the birds feeding their way back to the roosting area at dusk. 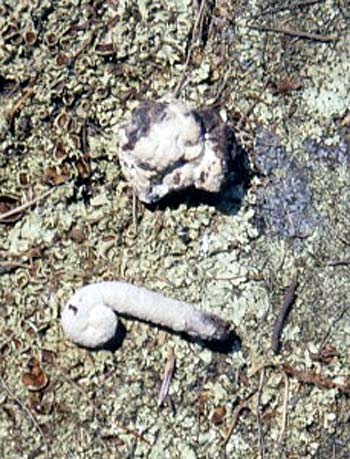 Tracks of mature gobblers are noticeably larger than hen tracks, and have middle toes measuring 2½ to 3½ inches long.

Scratchings are where turkeys rake the ground for old mast like acorns, green shoots, and insects.
Dusting bowls are shallow, oval shaped depressions in dry dirt areas. Since bathing and preening occur in dusting areas, look for feathers strewn about, especially the black-tipped breast feathers of gobblers.

Strutting marks are shallow, narrow grooves made by the tips of a gobbler’s primary feathers as he puffs up and parades, dragging his wings. Going into spring turkey season, you should have noted when and where you saw turkeys and turkey sign at common roosting, feeding, dusting, and strutting areas.

My turkey hunting has primarily consisted of calling roosted birds, and then walking and calling until a talking tom answers. It took an older, more experienced turkey hunter who had become hard of hearing to enlighten me to hunting turkey travel routes as you would hunt whitetail trails. He routinely scouted and glassed strutting gobblers and their open field locations prior to the season. One Saturday, he took a gobbler with a 10½-inch beard, and the following Saturday a gobbler with a 12-inch beard. The hunter scored by putting decoys in view of a strutting zone and hiding in the corner of the field. Every 15 to 30 minutes, he did some light hen calling. Between mid-morning and noon each day, the lonely gobblers strutted right into bow range.

This past spring I set up in a Hunter’s Specialties Hide ’N Hunt ground blind in a daily feeding area between a roosting area and a dusting/strutting zone. With a Bushnell Yardage Pro rangefinder, I set two hen decoys at 20 and 25 yards. Lightly hen calling at intervals created a relaxed atmosphere with several hens and jakes passing the blind by mid-morning. A gobbler taunted me as he walked a trail just up the ridge.

At morning’s end, I adjusted my stand location and decoys toward the gobbler’s travel route for the following morning’s hunt. At 11:30 a.m. the next day, I was looking through the side of the ground blind at a 21-pound gobbler with a 10-inch beard strolling through the decoys. It was the largest spring gobbler I have ever had in bow range. As the bird walked away, I drew my Martin Jaguar and launched a 2215 Easton XX75 tipped with a 3-blade Mar-Den Mini-Max that caught the tom dead center, right above the wing butts.

There is more to bow shooting a turkey than the shot. I have successfully shot wild turkeys with 3- and 4-blade Muzzy broadheads and the Mar-Den Mini-Max. All my shots had been body hits from the front and side. But none put a bird down on the spot like the hit I made on this spring bird, where I centered above the wing butts in the back. Although other shots were fatal, a quick recovery sprint was required to subdue the fleeing turkey. I lost the very first fall turkey I bow shot because I let him wander off, figuring I would find him. I learned the hard way that even though the turkey is dead on its feet, it will possess a lot of gusto for a while, so you have to get out there and retrieve that bird. Be careful of flailing wings and sharp spurs.

Concealment and Enticement is Key

Nothing is more disheartening after putting in all the time and effort to get a shot at a spring tom, than being detected by the gobbler as you draw the bow. The turkey’s greatest asset is its eyesight and he will remind you every chance he can. Full body camo, a facemask, and gloves are very important, plus more and more bowhunters are using completely enclosed portable blinds for total concealment. There are some beautiful models out there today designed with the bowhunter in mind.

A turkey hunter should be able to produce the following basic calls: the hen yelp, a cluck, a content purr, an excited cutt, and a gobble. A gobble call should be used sparingly during the spring season for safety concerns. But if you have hens around your blind and a big tom that’s hesitant to come in, a gobble will have that tom there in a hurry to claim his ladies. I have successfully used the H.S. Cutter Deuce single-sided box call on several occasions. You can use Gerber’s Deluxe Hunter’s Pruning Kit that features ratchet clippers and a slide saw to set up quickly to call, cut shooting lanes, and clear brush for your blind.

Intercepting the traveling toms of spring means doing your preseason homework. It is the observation and knowledge of your intended gobbler’s daily routine that will put you in the right place at the right time. It requires less use of the call, but more strategy in stand locations, and more use of your eyes and ears. It consists of setting up decoys so the gobbler has to pass your concealed location, and letting the gobbler come to you.

On the last day of spring turkey season, I again put this tactic to test. The sun was above the horizon by the time I got set up in a woodland opening, between a hardwood ridge and a swamp. A light, moving fog obscured my decoy as the dew burned off. A half hour later, a gobbler approached from the timber above. At 75 yards he began to gobble at the two hen decoys. Suddenly a thundering gobble came from the swamp edge. Like bookends, the two full-blown gobblers approached the hens and each other. The uphill bird was walking right into my shooting lane. I controlled my excitement and released the arrow.

Today, due to sportsman-funded wildlife restoration made possible by the Pittman-Robertson Act, our wild turkey populations have rebounded from 100,000 in the early 1900s, to a thriving population of more than 5 million in North America today.

The Nevada Legend GTX: Crispi Boots Ascends To The Top