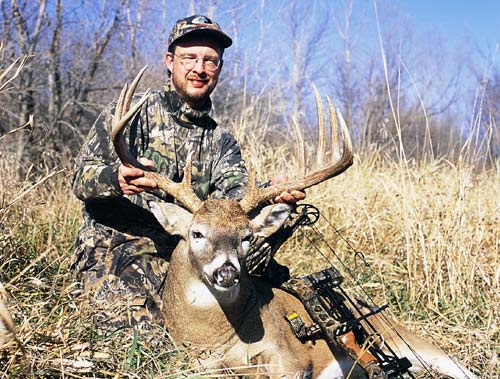 It is with great sadness that the associates of Grand View Media convey the passing of Mike Strandlund, editor of Bowhunting World magazine, editorial director for Grand View Outdoors. Mike died suddenly at age 56 while on vacation.

Mike began shooting a bow at age 12, hunting with it at age 16. Thus began a lifelong passion and career that took this bowhunter and journalist on adventures all over the world.

Mike began writing for outdoor magazines in his mid-teens. Growing up in Minnesota and Wisconsin, he earned his journalism degree from the University of Wisconsin-Eau Claire in 1980, financing his education by freelance writing and trapping. He spent five years as a newspaper editor in Wisconsin, then five years as a writer for the National Rifle Association’s American Hunter magazine. His responsibilities grew to editing and managing the production of books and other publications for the NRA’s Hunter Services Division.

In recognition for his literary excellence in advancing the sport of bowhunting, Mike was inducted into the Bowhunters Hall of Fame in 2003. His clear, insightful articles about his experiences have informed, influenced, and entertained multitudes of readers.

Mike’s survivors include his wife, Nancy, children Brad and Sara, parents Zonnie and Jean and sister Kim, Grand View Media colleagues, and many friends and hunting companions through the years. His passing leaves a true void. We will miss him greatly.

Bowhunter & Journalist
Mike enjoyed both modern and traditional archery and pursued game across North America and Africa. He embraced not just bowhunting, but the entire hunting experience, everything to planning and practicing for a hunt, to adjusting his equipment and form in pursuit of “the perfect shot,” to just observing the environment and animal behaviors while sitting on stand or in a blind. According to his profile with the Bowhunters Hall of Fame, he counted “whitetails, elk, wooden recurves, tight groups, September sunsets and November daybreaks” among his favorite things.

As passionate as he was about hunting, Mike was equally passionate about his role as a journalist and communicator. Raising the standard of outdoor reporting and providing well-researched, useful information while engaging the reader was a priority. He wanted the contents of every issue of Bowhunting World to matter to everyone who turned its pages.

“All the most important things in life—patience and acceptance, beauty and honor, strength and love, physical and mental acuity, challenge and compassion—are all distilled in bowhunting,” Mike told the Bowhunters Hall of Fame. “That’s what makes it so fascinating to do, and to write about.”

“While many people strive their entire lives to ‘stand out’ Mike was an absolute original who regularly shunned the spotlight. A true master of his chosen craft, Mike will forever be revered for his deft ability to raise the level of outdoor journalism, and positively impact the many journalists, friends, and like-minded outdoorsmen lucky enough to have known him.”

“I admire Mike for the skilled hunter and archer he was. I was fortunate to share many hunting camps with him and enjoyed numerous conversations on hunting tactics and technique. What’s more, I admire him as an accomplished journalist and co-worker. Mike steadfastly promoted editorial integrity and fairness, and he sought only quality work from his writers, which not only enhanced our editorial content but helped each writer grow professionally.”

“Mike could be intimidating to approach, but you were always glad you did. One of the most well- rounded people I have ever met, over the years Mike and I discovered mutual interests in seemingly logical areas of hunting and sports, but also music, motorcycles, and more. He was genuinely a great human being, and I will miss seeing him every day I come to work.”

“My time with Mike was shorter than many others in the industry, but I consider myself lucky to have enjoyed numerous adventures with him in the field. I respected him greatly as a journalist and editor. He was certainly a gifted wordsmith and brought our passion for the outdoors to life through his words in a way that only he could. Mike was just one of those rare guys who had that special ability to bring an intelligent unique perspective to topics that separated him from others and earned him the respect of his peers. We will miss Mike here at Grand View Outdoors and I know he will be missed by his family and many friends in the outdoor industry.”

“Mike was a friend and fellow promoter of the sport. We worked together in the editorial field and I always admired his professionalism and his down to earth demeanor. He was always there to help me promote my clients products and was honest in every dealing I had with him through all these years. My condolences to his family and I know he will be greatly missed by all his friends and the entire staff of Grand View Media.”

Altus Brands One of "Michigan's 50 Companies to Watch"

Today In The Deer Woods - Apr 4