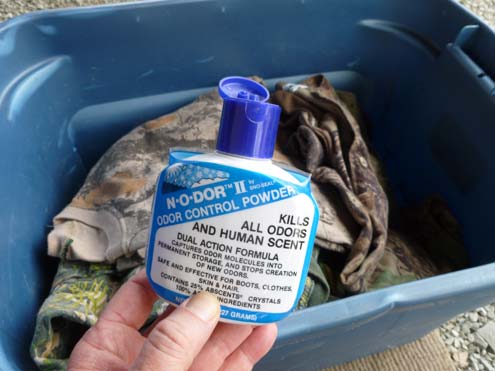 Abscents powder is the base of N-O-DOR II powder and is able to collect odors that the activated carbon can't hold. This means it adds to the effectiveness of your carbon hunting wear.

To understand the science lets first examine a molecule of activated carbon. It is made by heating coconut husk without oxygen. The carbon is then presented as a microscopic framework of fibers with holes. The carbon has an affinity toward other free molecules. Due to the magnetic charge, the carbon fibers attract and hold organic and inorganic molecules alike. This is why carbon suits are used by hazmat teams to absorb hazardous chemicals. Once the open spaces are filled with attracted molecules the carbon is “full.”

Activated carbon uses real science to attract and hold odors. Carbon does not destroy odors. One of the realities of activated carbon is that it is attracting odors full -time. If there is human odor present it will load up on that but if it sits “idle” carbon is still busy attracting the smell of plastic, a baloney sandwich or of a department store.

Soon it is filled to the overflow point. It doesn’t just wait for you to put the jacket on to go hunting. It acts like a vacuum cleaner without an off switch. Once exposed to odors… it loads up. It’s like a bucket full of ping pong balls. Once the bucket is filled you can’t add more balls.

Even more reality is at play here. Activated carbon also has an affinity for water. If the carbon gets wet from your perspiring or rain, the pores are filled with water rather than odor. As it absorbs more water and resident odors are liberated. Giving off odor is not a good thing if you are planning on being odor free.

How long does it take activated carbon to load up? Hazmat suits worn by soldiers are discarded and replaced after 24-hours, even if there is no poison gas present. They are discarded because they are filled with ambient odors. They are loaded like a wet diaper. So what about your carbon-hunting suit? Sadly, there is little difference. You must recharge, that is ‘unload it’ after each 24-hour use and keep it sealed in an airtight bag until use. The question is, how do you recharge it?

Activated carbon is not easily recharged or unloaded. Nevertheless, it can be done. Atsko makes an engineered soap called Sport-Wash. Unlike many other detergents it is made with a straight carbon chain. Coincidently, like activated carbon, it too is made from a coconut base.

Here is why a straight carbon chain is so important. Sport-Wash® is superior because it functions by surfactency. That is it attaches to organic molecules on one end while attached to water on the other. It uses a ‘hook on and pull’ strategy. This allows it to grab the odor molecule on one end and pull it from the carbon as the water carries it away. More importantly, it leaves no trace of its own organic compounds behind. Instead, it rinses completely leaving nothing to occupy odor-holding sites in the carbon.

To keep your carbon gear empty, store your carbon suite in an odorless barrier bag with N-O-DOR II® powder, a more powerful adsorber that scavenges odor from the bag and even draws down the odors remaining in the carbon suit until it is ready to use. Reseal it into the bag after each use until you have reached 8-24 hours of use before washing it again.

Heating is an important step in the recharging process and can be done several ways. The odor molecules are adsorbed by becoming caught in the crevices and fissures of the carbon.

Adsorbed and the word absorbed are different. Adsorb means to gather gas/odor onto a layer on the surface while absorb means to soak up or take in by molecular action like a sponge. A clothes dryer’s heat adds energy (velocity) to the odor molecules so that they are harder to capture and more likely to jiggle free and escape. This is why the capacity to hold them decreases as the temperature increases.

A very high heat (400° – 700° F) will rapidly dislodge and vaporize molecules whose boiling point is below the purging temperature. Unfortunately, the high temperature will rapidly destroy the whole garment so this is out of the question.

Home clothes dryers reach 160° – 200° F. Most fabrics can handle this heat and will sustain only slight damage in two hours of tumbling. If your hunting schedule allows it, a low heat will restore capacity in a few days with absolutely no damage.

The capacity of carbon to hold odor decreases as temperature rises. The capacity to hold odor increases as the concentration of odor increases but falls off badly at low concentrations and also falls off as humidity increases. If you have a purged suit, low temperature, low humidity, and lots of odor (and you didn’t shower with Sport-Wash® residue-free detergent) the carbon suit will do a remarkable job absorbing an unbelievable amount of odor.

Unfortunately, as conditions change, the carbon suit can become very ineffective. These shortcomings can be overcome by supplementing the carbon suit with N-O-DOR II® powder, which contains Abscents®.
So there you have it, activated carbon will help erase your scent but you must know its limitations and play a role in maintenance. You must do everything right all of the time.

Control your odor at: Atsko Products

For the Record - Pope & Young Club