For the Record – Pope & Young Club

EVERY TWO YEARS many folks in the bowhunting community turn admiring eyes to the Pope and Young Club’s biennial gathering. That’s where the sport’s latest collection of bowhunting’s biggest and best animals are honored publicly. And without fail, every two years some people viewing the amazing display and photos of record-class North American big game animals are overheard saying, “This is the one best ever! It can’t get any better than this.”

But almost without fail each successive P&Y convention does get better, proving the point that the Golden Age of Bowhunting is here and now. In fact, big game bowhunting’s future is bright and getting brighter year by year. 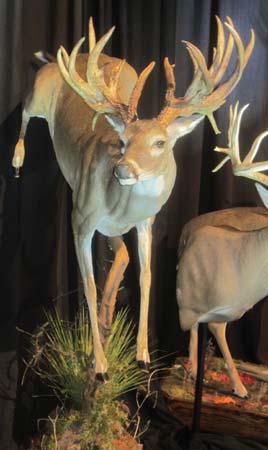 Mike Kistler, Pope and Young Club Records Chairman, announced that there were 7,592 total entries accepted during the 2011-2012 recording period. As always, whitetail deer entries easily headed the list with 4,693 typical and 369 non-typical bucks accepted. The second most popular species was American elk, with 673 typical and 15 non-typical bulls entered. Black bears (469), pronghorn antelope (379), and mule deer (332 typical and 64 non-typical) round out the current top five most popular bowhunting species.

Mike also noted that as of December 31, 2012 the Pope and Young Club had 96,580 total entries in the club’s archives. Of these, 51,300 typical and 4,133 non-typical whitetails combine to easily make America’s most popular deer the hands-down favorite of our continent’s bowhunters.

Founded in 1961 by Glenn St. Charles and a handful of Seattle-area friends, the Pope and Young Club has been processing and recording North American big game entries for more half a century. The Club’s first record book, which I had the privilege of editing, was published in 1975 and contained only a few thousand total entries. But each successive P&Y record book, published every six years, has grown substantially in size and content. The Club’s seventh edition book was released in 2011. The next hardcover edition is slated for release in 2017. Supplemental paperback books released at each biennial conventions contain a complete list of all new entries accepted during each two-year recording period. These books and booklets, as well as complete information about the Pope and Young Club, are available online at www.pope-young.org or by contacting the Club’s home office in Chatfield, Minnesota, at (507) 867-4144.

Lumenok Lights up on Bowhunting Net