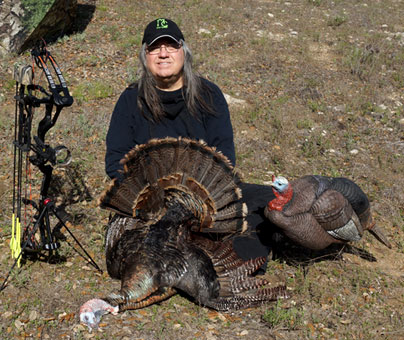 I drove to  my long time friend Jim Mitchell’s place Red Oak Ranch in Blanket, Texas. Jim used a map of his property to show me a winding creek in a large wooded area of cedars and oak trees. A turkey roost was along the creek.

I decided to set up at the crest of the hill about 300 yards from the creek.

I wedged my Primos Dark Horse ground blind into some trees in an area that looked slam dunk for turkey traffic.

It was in the mid 40’s the next morning as I waited in the blind for enough daylight for the Toms to gobble. Soon several gobblers were hammering it from the creek down below.

I held off calling. I wanted to wait until they flew down and then call on them right away. Unfortunately they were too far away for me to hear the fly down and the next thing I knew I heard some gobbles to the north of the roost. I called at them and they gobbled back but then promptly went into “shut mouth”mode.

Over the next two hours I called ever 15 minutes without any reponse. But 6 bucks walked by. They are all in velvet with fat based, starter antlers. Red Oak Ranch has bucks with huge racks. (And specializes in bowhunts for trophy and management bucks.)

Nine O’clock rolled by. After my routine every 15 minute call I heard a gobble way off. I took a deep breath and yelped and cut real loud. The next gobble was not as far off and I answered him right away. There were 2 more gobbles, each closer than the last.

Soon I heard drumming behind me. Then it got silent. I played my best card, I waited.

A couple of minutes passed. Bingo, a Strutter strolled into view on my left, already less than 15 yards from me. My bow was waiting at the ready, supported by a BowStix. The gobbler headed for my decoy and I carefully gripped my bow by the handle and slowly moved it into position.

A second gobbler came in from the left, this one even closer. He hurried to catch up with the first gobbler and the duo went straight to my fine Dave Constantine jake decoy.

The decoy is only 8 yards away and now, so were they. When I drew, one was strutting right behind the decoy — the other had its back to me and dropped strut. I gave him an introduction to archery. He ran back the way he came.

The other gobbler remained by the decoy, intently looking in the direction the arrowed one ran. From past experience I know that usually means a gobbler is down. It took him a few minutes to leave out and I gave him a few more before getting out of the blind.

I found him quickly. He went 50 yards and tipped over under some ceder limbs.

I texted Jim Mitchell and he came over take a picture. 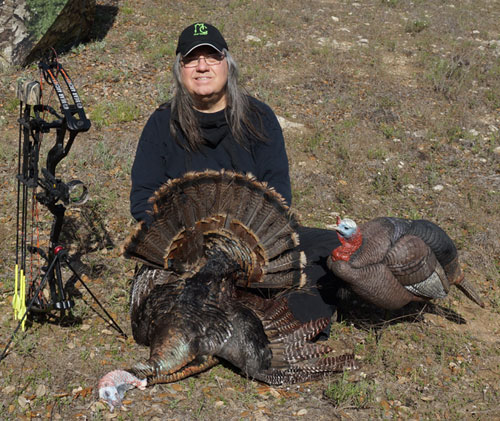 I want to thank Jim Mitchell for letting me bowhunt wild turkeys on his Red Oak Ranch by Blanket, Texas. The ranch has been managed for trophy whitetail bucks for 5 years and this year is the first year for hunt bookings. You can check out the bowhunting opportunity at www.RedOakRanchHunting.com.

The more I hunt with my 2013 Empire from Bear Archery the more I enjoy and like it. The bow’s Shadow finish is perfect for ground blind hunts. The Empire is one of the smoothest bows I’ve ever shot. It is very quiet as well. Jim Mitchell has an archery practice range for his bowhunters and he remarked the my bow was exceptionally quiet. It has impressive speed and hitting power.

Hunting gobblers, I want a broadhead that makes a big cut. The Grim Reaper Whitetail Special is a 3 blade expandable that has a wide 2-inch cutting width and a cut on contact tip. The arrow passed through the gobbler and left a major wound channel that put him down is 50 yards. Thisis a tough broadhead too, tried and proven on bear, deer and wild turkeys.

The Empire’s arrow rest is a Trophy Ridge Revolution. It incorporates the two new technologies that changed recent archery, it is both a Full Containment rest and a Drop Away rest. I started using this rest during deer season and it shoots QUIET … and accurate.

The bowsight is a Trophy Ridge Cypher 3. It’s made from a Ballistix CoPolymer and is as strong as aluminum but 25% lighter. A particular feature I really like about the Cypher3 is that the sight has Tool-less Windage and Elevation Adjustments. I’ve never had a sight that is so easy to adjust and tune.

I used my favorite peepsight, the Whisper Peep with tubing.

The Beacon bowquiver from Trophy Ridge is totally designed for bowhunters. It has unique features I really appreciate. The quiver’s hood has 3 powerful green LED lights encased in the top. So this quiver has been  a flashlight on the way to many a stand as well as inside my ground blinds. Now, there’s no fumbling around in my day pack for my flashlight … because I always have my bow.

The Bow Bipod by Bowstix kept my Bear Empire at the ready. This easy to use product stands your bow upright do it’s within reach when you have an opportunity. The gobblers came in without making a sound and they were close. I  had to, both, get my bow in hand and do it without the gobblers picking the movement up. Today the Bowstix was a definite asset.

I am using Wings #599 ED binoculars from  Alpen Optics. They are smaller and lighter than most binoculars I’ve used. I chose the 10 power ones and they are clear and easy to focus. Another plus, they fit in my front pocket of my pants or hunting jacket so I always have them in reach.

My carbon arrows are the VAP from Victory Arrows. They shoot true and are tough and get excellent penetration. I fletched the arrows myself with the fast, easy to use EZ-Fletch MINI from Arizona EZ Fletch. I used yellow arrow wraps from Bohning Archery. The fletching is yellow Opti Vanes from Goat Tuff Products. It’s a 2-inch vane and shoots great.