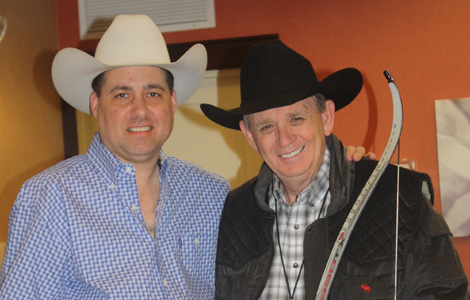 Very soon I’ll have a new website for our instinctive archery shows.  The current one was developed ten years ago and has been updated a few times but is ready to be fully rebuilt.  With 28 years worth of photos, quotes and information it is a tough job to condense it down to a quick format where people can browse through it.  Watch for an update here once the new website is up and running.

Archery has lost another icon with the recent passing of Tom Jennings.  Jennings was instrumental in getting the compound bow mainstream in the 1970’s and he was a leader in bow manufacturing during the time he ran Jennings Archery.  He had founded Jennings in 1969 in California.  Sherwood Schoch notified me via email about an hour and a half after Tom passed on February 25, 2013.  He was 88.  Tom was at my parent’s home and shop in the 1980’s and was a family friend.  It was great getting a Christmas card from “Tom and Hazel Jennings” every year.  You can read an interview I did with Tom (thanks to the great efforts of  Sherwood Schoch hand carrying my interview questions to the remote island where Tom lived after retirement) here:

Now Tom joins Earl Hoyt, Fred Bear, Glenn St. Charles, and the other archery icons that have gone before him.  I’ll miss that old beat up hat of his too.

It’s rare that I ask for your help in charitable giving but I have a good friend, Kasey Johnson, that is running for the South Central Texas Chapter of the Leukemia & Lymphoma Society’s 2013 Woman of the Year. I want to see her win, and each dollar of a donation is a vote.

Kasey works in the UT football program’s office and works closely with coach Mack Brown. I want to help her out as much as possible in this endeavor. She is a good friend to my family and I want to see her do well.

I lost my favorite uncle Bill to acute Leukemia a few weeks ago, so I know how bad that disease is. If you would please make a modest donation via the link below, I would greatly appreciate it. Let’s help Kasey win the title and in the meantime help raise money for a very worthy cause. I don’t recall ever posting a charitable request in this newsletter in the history of “Straight Shot.” I hope that you, like us, will take a few minutes to make a modest donation. Here’s how:

Kasey Johnson has a “Can Do” attitude and like everyone in the UT football program, she plays to win. Let’s help her win this title and help some deserving folks while she’s at it.

Gen. Leroy Sisco is a retired three star general.  He has made it a mission to help as many of our wounded warriors as possible and has given away more than 300 homes across the United States to military heroes.  On Saturday, March 2, 2013 my family and I visited with Gen. Sisco at his hotel in Lexington, Kentucky to present him with one of my stage bows as a token of friendship.  In 28 years of shows, I have given away three of my stage bows.  You can read more about this in my most recent column on Bowhunting.net:

In the column above you will also find a LINK to the wounded warrior site if you want more information on what they are doing to honor our vets.  I got tickled at our son Gus (6), who was so excited to meet a three star general and see a George Strait show.  He told his teacher about the general first then the concert…

Well folks, that is the very latest.  I enjoyed performing in East Texas recently and will be back in Texas May 3 for an event in Pleasonton, Texas.  I’ll also be doing some Cabela’s appearances this summer and other big shows.  My time off the road is winding down and starting this Spring it’s time to get back on the road. We have alot of big shows lined up–from Texas to Ohio to Conneticut and places in between.  The HAVE BOW WILL TRAVEL tour rolls on.

Thanks for reading and until next time, Adios & God Bless.