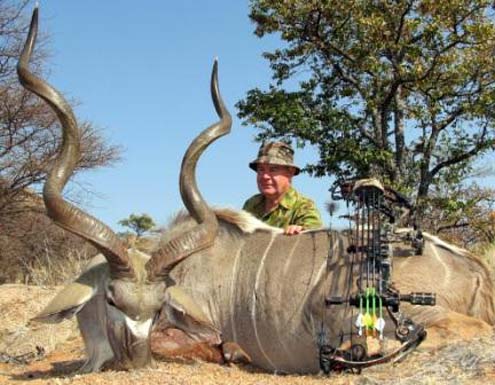 The big bull turned sideways for the opening and the shot was perfect.

Ray Scott from New Zealand was on his 3rd hunt with me in August 2010. He had already taken a number of great trophies on his past two hunts; this time round the idea was to take animals that had eluded him over the years.

The Granite kopjes and Mopane tree savannah terrain of the main hunt concession of Vieranas Safaris is situated in the North Western region of Namibia, Africa. All the Game in this bow only hunt area is naturally occurring to this side of the country.

Ray had shot a 51 ½ inch Kudu on his very first hunt and had told me that if something bigger came in, he would consider it. On this hunt we were hunting two areas as he wanted a Waterbuck, so the plan was to hunt at Vieranas for about seven days and then go to another hunt area for the Waterbuck.

We were coming to the end of our time at Vieranas; Ray had taken a beautiful old Eland Bull earlier in the hunt and a Warthog the day before. On the last day my plan was to sit in a blind that is between the kopjes with a Mountain ridge to the North, where late in the day Hartmann’s Mountain Zebra come off the ridge to drink an hour or so before dark.

After breakfast just before sunrise we set out. On the way to the blind we saw some Gemsbok and Kudu cows. We parked the Land cruiser hunt truck behind the kopje and after checking that the water hole was clear we walked the last 200 yards to the blind with our equipment, cooler box, water and Ray’s hunting gear. In the far distance we heard a Baboon bark, the troops wake up call.

Not today please, the last thing I wanted to see was Baboon. They are a big pain not only do they destroy the blinds they make so much noise at the waters that other game on their way for a drink go on high alert which is not good for shooting.

Anyway on getting to the blind, we found that the Hartmann’s Mountain Zebra had finished the water and there was only a small trickle left in the water trough. Piet, the bushman tracker had a quick look around the waterhole for game tracks, while Ray and I settled in the blind. Before Piet left, he told me there were some Kudu Bull tracks, I kept my fingers crossed that they were still in the area. As a wise man once said ‘the best things come to those who wait’. 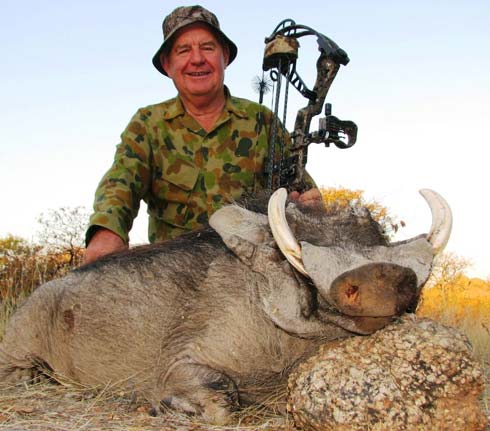 After about an hour we heard the flow of water meaning Piet was back and pumping the water into the water tank. In the hour we had been waiting a Warthog sow and a couple of small piglets had made a turn and left again. The same sow and little ones were back and making the most of an early morning drink. You could literally see how their stomachs filled up. A short while later a young Gemsbok turned up with another Warthog as the sun rose higher.

The next minute out of the blue there he was … a big Kudu Bull standing behind a tree on the far side of the water, the Grey Ghost of Africa.

I picked up my binoculars; he was big just how big was the problem. I nudged Ray, and he whisper how big and was it bigger than 55 inches, by which time the Bull had started to move to the water for a drink. As he put his head down, I whispered to Ray easy 55 if not bigger. Ray whispered back he would only shoot if I could guarantee it was over 55 inches.

After some more thought and whispering to and fro, the Bull was growing more impressive before my eyes. I said to Ray this Kudu must be close or over 57 inches. The bull finished drinking and I thought Ray had lost his chance at a shot. Luckily the Kudu Bull turned and walked to the salt block. Would he give Ray a shot or not, that was the next question. As chance would have it, luck was on Ray’s side and this majestic Bull turned and stood broad side. Perfect…. 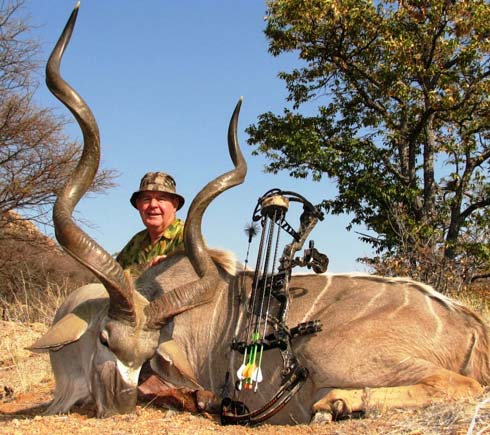 The big bull turned sideways for the opening and the shot was perfect.

Ray drew back his Mathews Monster 7 Bow (Easton FMJ arrow with Bohning Blazer vanes and tipped with a 125 grain G5 Striker broadhead). I picked up my bino’s and whispered to Ray “When you ready”, by now I had the shakes big time.

Ray aimed and released, the arrow flew true hitting the Bull bang in the engine room, it was an awesome shot! The Bull turned around and ran away on a game trail beside the kopjes away from us. I asked Ray how the shot felt, he said good. The Bull ran out of sight and we both thought we heard him go down.

After a wait of about ten minutes we got out of the blind, Ray with bow in hand and arrow nocked (you never know) there was good blood on the ground and the tracks of the bull was set deep in the coarse ground. We followed the tracks for about 100 yards and saw the Bull had gone down in a dry river bed just behind the kopje. Ray was blown away by the mere size of the bull.

I gave Ray the honour of calling my wife, Amelia on the radio to send the hunt truck. Laughingly Ray told Amelia I gave him a big discount on the Bull as he was so huge! Amelia turned round and said “You mean you’ll be doing the washing up for the next few months?”

When the Land Cruiser truck drove up, we took trophy photos of Ray with his beautiful Kudu Bull. The longest horn measured out at 57 1/4 inches.

Funny thing was this was the same blind from where Ray shot his very first Kudu Bull on his first African hunt three years earlier. After all the excitement and slaps on the back we returned to the blind as the truck drove off.

Later that same day, an old Warthog with very thick tusks came in just before the sun disappeared behind the ridge, Ray made another great shot. The Warthog only went 60 yards.

Ray was able to shoot his Waterbuck Bull as well.

A perfect end to another great hunt.