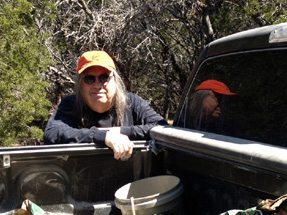 One of the big advantages of using game cameras, like the Spypoint trail cameras I use, is that you can find out if what you are hunting is around during daylight hours. 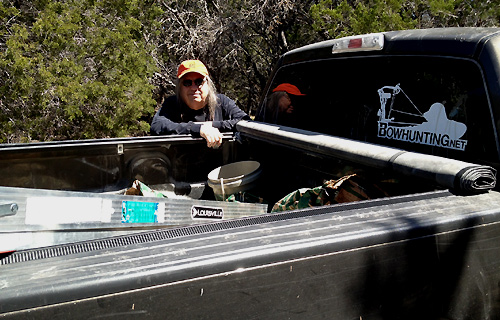 So after looking through pictures from 4 different areas I learned that two areas have daytime wild hog traffic; the Point and the Hammer Hole. Now, I”ve bowhunted hogs in both of these areas for years. Some years hog sightings are great and on others the sightings are sparse. Last year was a sparse year for hogs.

And also for rain. The nearby river dried up. What few fields of crops that grew anything were ruined by ravenous wild hogs. Probably that’s why the Point and Hammer Hole were not very good hog hunting in 2012.

This year still weighs in a little on the dry side but we’ve had enough rain that the river is running again and the farmers and ranchers report that they’ve seen wild hogs all around. Right now the Point has plenty of wild hog traffic.

There is a reason that the Point has good wild hog and other wildlife traffic. There is a 5 yard wide place on the ground that catches and holds rain water and wildlife comes there to drink after every rain.

You can see it in the picture below. You can also see the Primos Dark Horse ground blind we set up here. 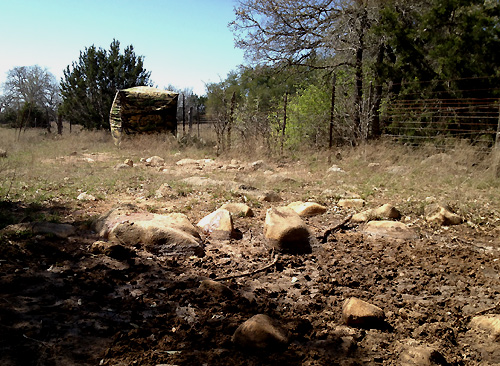 Years ago I started a Mineral Pit here. And every year since I’ve added calcium, phosphates and other minerals to it — over 2,000 pounds of minerals has been left here.

The hogs have worked this place over so aggressively they have even dug up rocks that were buried in the hard soil.

Collon Cottrel came with me help get set up to hunt hogs in the upcoming weeks. Collin added some Hog Wild mix by Evolved near the Mineral Pit. 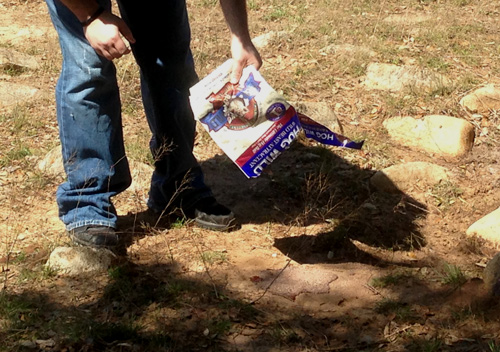 He also added some Evolved wild hog syrup next to the pit. 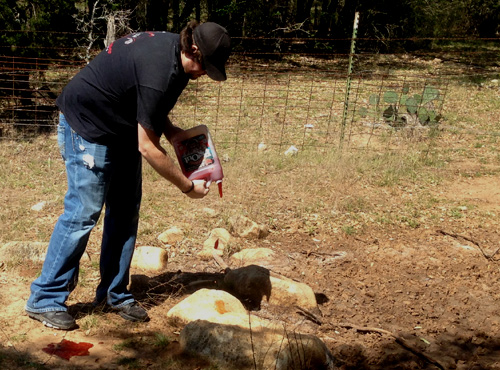 NEXT: NEW SET UP AT THE HAMMER HOLE…