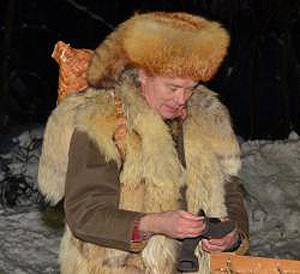 Bohning Archery proudly announces that the Etela-Savo game management district of Finland elected, for the first time, a Bowhunter as the Hunter of the Year. This yearly “camp fire” event was held on Saturday the 15th of December. The Hunter Of The Year award was given to Juha Kylma, President of the European Bowhunters Federation (EBF). As Juha, accepted the Hunter of the Year he was decorated with a wolf fur coat, a fox hat and an old fashioned rucksack (made of the skin of birch tree). Juha also received a fancy handmade leather rucksack-chair.

“This is good proof that in Finland, we bowhunters have reached the acceptance and respect of the hunting society, we are equal hunters” said Juha.

Bohning Archery is proud to have such high caliber bowhunters like Juha as a member of our Pro Hunting Staff.

Juha speaks Finnish, Swedish and English and has been the Director of a private institution for juvenile delinquents for the past 23 years. He and his wife, llona have 4 children.

To Articles by Juha Kylma on bowhunting.net…

Montana's Wilderness Areas Are Not What They Are Cracked Up To Be!