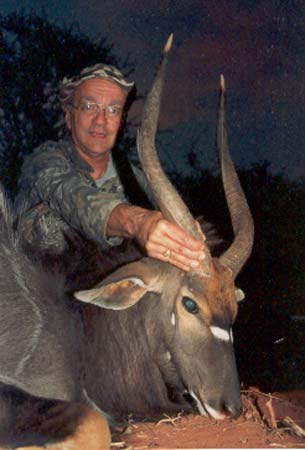 Some of the trophy fees paid by hunters goes back to local villages for building schools, wells, etc.

Antihunters have been inching their way into Africa for quite awhile. Kenya abolished all hunting in 1978 and although there was a spurt of activity to bring it back two years ago, it fizzled out for lack of political support.

The arguments used to eliminate hunting in Africa are rather simple. The opponents of hunting, most of whom do not reside in Africa, say that photo safaris bring in more tourism dollars than hunting, and create more jobs. The other argument is that hunting is hurting wildlife populations. The assumption is that with photo safaris and no hunting, wildlife will be better off. These latter arguments are pure fantasy, and the sad fact is that without legal, recreational hunting, wildlife populations in Africa will suffer a great deal. Here is why.

What has brought this whole issue to the “Topic of the day” is the fact that Botswana has now banned all hunting. As of January 2014, hunting will be gone. The government says that “The shooting of wild game for sport is no longer compatible with our commitment to preserve local fauna.”

There are now 130,000 elephants in Botswana and without control, they will do great damage to their habitat (that is now happening) and even greater damage to village crops. Add that to an increased loss of their stock to predators.

So, no hunting will cause rural villages to lose food sources from their gardens and domestic stock that they rely on. That happens now in areas where there is no safari hunting. When rural villagers are suffering such damage, who do they call on for help? When rural villagers have rogue elephants or lions that have developed a taste for human flesh, who do they call on for help? Three choices; Government officials (rarely able to respond), Photo safaris (yea, right) and Safari hunters (you get the prize).

Do you think that governments collect fees from photo safaris that then go to help rural villages? Really? If you do, then you do not know anything about Africa. We give tons of handouts in this country. It doesn’t happen in most of rural Africa. When hunting is stopped in rural Africa, not only do the people suffer, but wildlife suffers.

Do you believe that governments collect tax dollars from photo safaris and use that to manage all wildlife in a country as we do with our Pittman Robertson funds in America? Heck, we don’t collect money from cameras, binoculars, bird seed, etc. in this country to manage wildlife and you think that happens in Africa? If you do, then you don’t know much about Africa.

Diana Rupp wrote a great editorial on this topic in the latest Sports Afield magazine. In it she mentions a great new book on this situation, “Save Me From the Lion’s Mouth” by James Clarke who talks about the great impact of eliminating hunting on people and wildlife in Africa. He notes that wildlife numbers are down in Kenya since hunting was stopped and photo safaris took over. He notes the same for Tanzania who banned hunting, then brought it back. He notes that when you stop hunting and promote ecotourism, you don’t save wildlife, you just increase rural poverty. This book is a great book and I highly recommend it to you.

The bottom line here relative to what has happened in Botswana is quite simple. Unless that government comes up with ways to take a much larger chunk of revenue generated by photo safaris and put that back into rural villages, the hunting ban will be a major detriment to rural Botswana and to wildlife. History shows that this loss of hunting will be followed by a loss of wildlife. And most of the people who will go on these photo safaris don’t recognize this, nor do they want to. They probably believe that hunting has placed elephants in Botswana on the endangered species list.

For more from : Dr. Dave Samuel

ScentBlocker™ - Not Just For Fall Anymore

Books for the Bowhunter