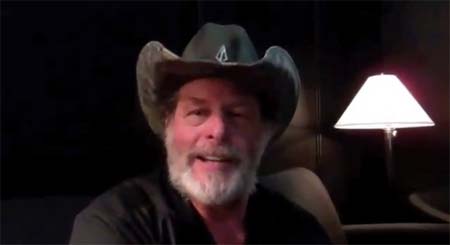 I raced off stage in Tampa after throttling my 6511th high energy rockout, mopped up as much dripping sweat as I could, changed into dry clothes, grabbed a Gator Ade and a sack of food, hung onto my gorgeous wife Shemane and headed to the airport lickity split.

We landed in Houston an hour and half later, met by a commando in a black SUV and hauled ass to the hotel across from the jam packed Sam Brown convention center.

Greeted by smiling, friendly families, cops, military heroes and wonderful Texans galore, we settled in for the night and prepared for what we surely knew would be a grand day of ultimate freedom celebration with great Americans from all fifty states.

Early Sunday morning, just like the last twenty or so years in a row for us, we gingerly walked into a record setting attendance of more than 80,000 NRA member families, united to stand up and fight for our sacred God given individual Second Amendment guaranteed right to keep and bear arms.

The positive energy is always a glorious force to reckon with at these NRA events, but this year, in the face of the most blatant, unambiguous attack ever on our rights, the mood was more up-beat and determined than I have ever seen before.

When the president of the United States has the audacity to dare claim that NRA members and law abiding gun owning families in America don’t care about saving innocent lives because we didn’t fall for his counterproductive background check scam, one need’s to look no further for inspiration to stop the vicious lies and push back hard against such indecency.

The place was fired up. Each and every seminar, event, banquet and speech set attendance records, and the line for my charity fund raising autograph session wound around the entire arena and out the doors. 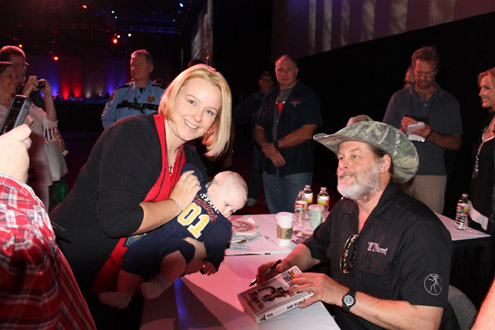 Shaking hands for hours with the friendliest, most generous people you could ever imagine, I signed books, photos, guns, bows, bullets, arrows, hats, shirts, skulls, guitars, artwork, antlers, knives, magazines, little boys and girls school books and homework, and even a couple of prosthetic limbs.

Every man, woman, child, cop, teacher, military hero, young, old, black, white, big and small shook my hand firmly and sincerely thanked me for fighting the good fight for freedom and liberty, and for crushing the freedom hating gun grabbers like I’ve been doing for more than 50 years. 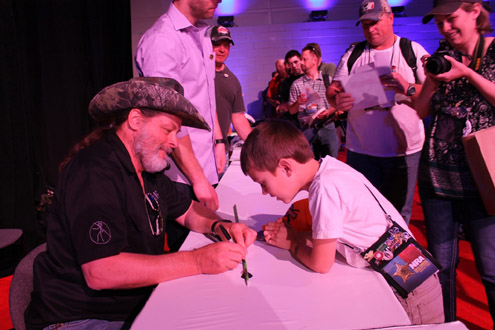 Custom homes were given cost free to many wounded heroes of the US Military by the always generous donations of NRA members through the Military Warriors Support Foundation and Operation Finally Home charities. (For more go to: Homes 4 Military Warriors)

Gobs and gobs of money was raised for more military charities and children’s charities that are never mentioned in the dishonest, unprofessional media.

I wrapped up the wonderful day with a Freedom Is Not Free speech and presentation, and thanked my fellow NRA BloodBrothers for their Herculean efforts to stop the vile corruption and power abusers who are dedicated to force Americans into unarmed helplessness.

They will continue to lie otherwise, but their evil agenda is well known.

And the NRA members are on record that we will not let it happen.

We are on record that we will stand up and fight to the very end.

We are on record that we will never give up our God given individual right to self-defense or be told how many bullets we are allowed to defend ourselves and families with.

We are on record that politicians can’t charge us for professional security details then turn around and tell us we can’t protect ourselves and families with the same firepower that they are protected by.

We are on record, again; don’t tread on me!

Godbless the NRA and Godbless America. See you next year in Indianapolis.

To see more and to become an NRA Member please go here – Your Freedom’s Depend on You Joining: NRA