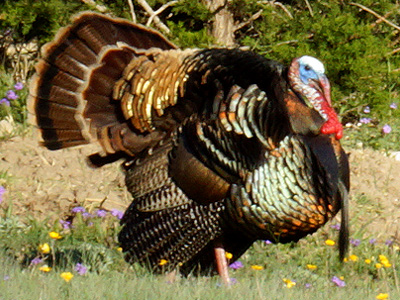 Back at Jim Mitchel’s Red Oak Ranch hunting wild turkeys again. I set up a Dark Horse blind on the edge of a plowed field that’s way downhill from where I was on my first hunt.

Wow! It got crazy. Right away I called up a longbeard down hill through the trees along the field’s edge. He stopped 40 yards away and looked all around. A hen came up from my right and stopped near the gobbler. He walked around her and she lay down. Soon after the hen got up and left and he followed her.

Another gobbler walked down the hill to where the first gobbler had been. He strutted and gobbled at my calls. He moved a few steps closer and gobbled more. He was almost within bow range and I was ready to shoot.

A hen walked into the field 80 yards uphill from the gobbler. Somehow he realized she was there and when he saw the hen he blew me off and went after her.

Soon 5 hens came by me only 10 yards to my left and casually crossed the plowed field. Next 2 hens showed up in the trees up hill from me. I made some soft calls and one of the hens soft yelped back. They were coming in my direction.

Bingo, behind them, I saw the shape of a full fan. I talked to the longbeard and he gobbled several times. 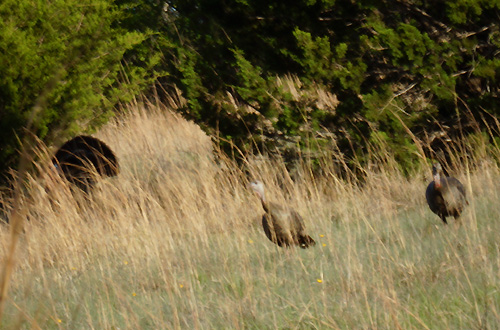 After he gobbled the hen duo immediately came over by my blind. I took another picture. 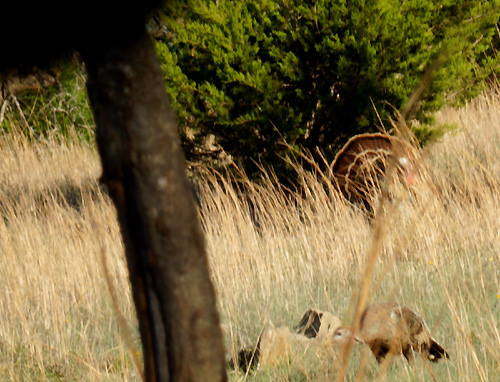 The hens appeared to be going by the blind on the left side. That was a good thing. I took one more quick picture and stealthfully got my bow in hand. 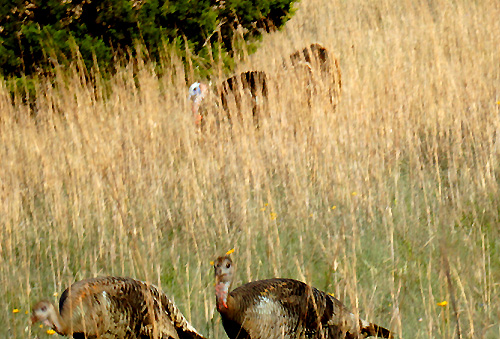 The hens passed me and when he gobbled again they apparently didn’t want any of him and sped up and made their exit. The longbeard was still in the tall grass by the plowed field and I cut at him and shut up. Immediately the longbeard strutted his stuff and moved into the field and stopped in front of me … 10 yards past my 20 yard comfort zone. I picked up my camera and took his picture with my camera resting on my top limb. (That way I still had my bow in my left hand when he came in range.) This gobbler had a very long beard, he was a real brute. 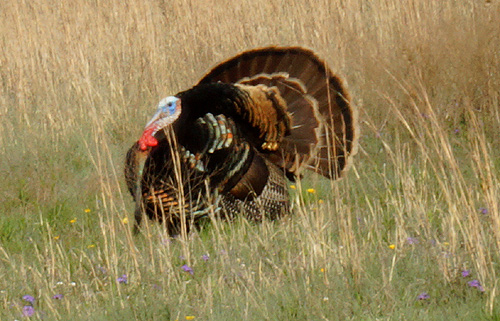 I took another picture. Oh! Oh! We got a problem! 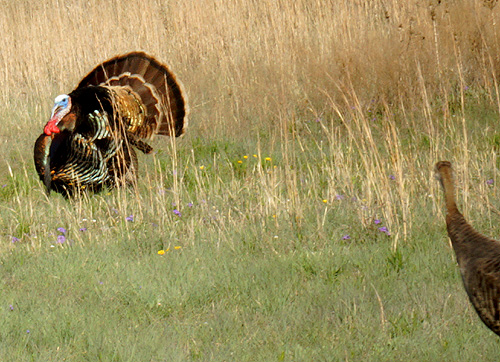 At this point the longbeard had not noticed the incoming hen. But I got a cool pic of him when he did. Look at his snoodle swing around as he comes to attention. 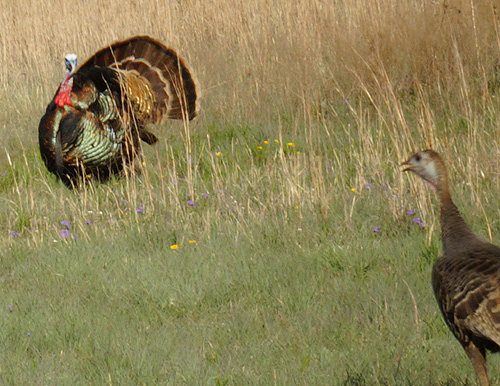 Here is a zoomed in pic of the gobbler. You can see his snoodle real good here. 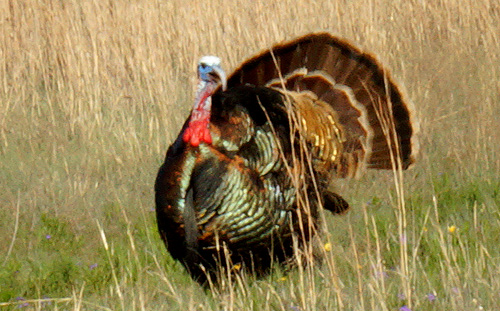 The hen was only a few yards from me and she continued on by. Mr’ Gobbler left me cold and hung with the real hen. 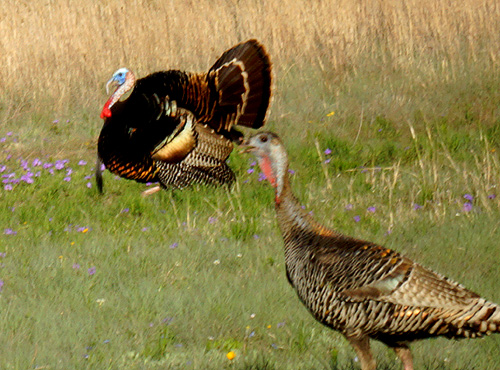 When he was over 100 yards away I called again. He stopped and drummed as he turned in my direction. But he was not gonna play with me any more today. 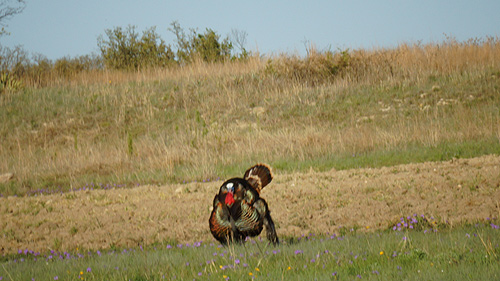 Soon 9 hens came out of the trees to my left and entered the field. I called to see if I could get a gobbler over. I did. Two jakes. 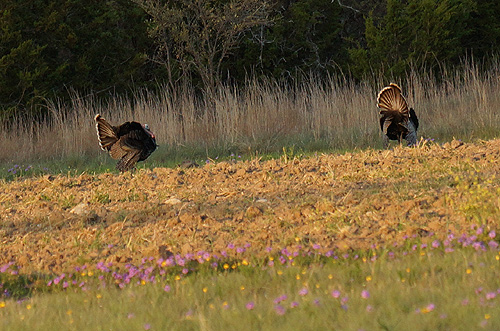 After that the jakes hung around and unsuccessfully tried to get some hens interested. But no luck. Later deer showed up. The bucks were wearing their starter antlers in velvet. Red Oak Ranch has bucks with monster racks and I made a mental note to ask Jim Mitchell if I could return in August and see the full velvet racks of the ones I watched.

Last thing, 6 more hens walked through the field and the 2 jake strutters approached each one. But it was roost time and soon the area was empty, except for the big bodied bucks.

Indeed, life in the turkey woods was good today.