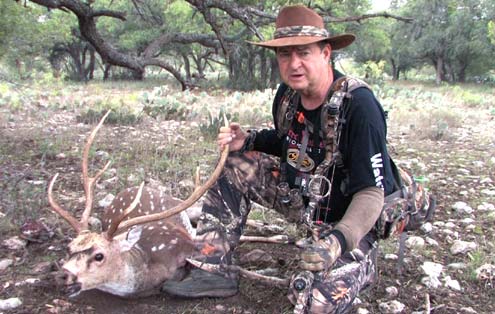 Waiting for the right shot proved correct once again as author poses with his trophy Axis stag.

We were hunting Axis Deer on The Baker 3 Ranch, in the Edwards Plateau near Rock Springs, Texas. I doubt most of you folks don’t know what the species Axis Deer is and what it has done for the hunting in Texas.

The Axis deer was introduced to Texas in 1932; in 1988 a Texas parks and Wildlife survey found free ranging herds of Axis Deer in 27 counties of Central and Southern Texas. The Species can now be found on Ranches in 67 other Texas Counties.

The Axis, Spotted Deer, or Chital, (the name “chital” comes from the Bengali word “spotted”) originally inhabited wooded regions of India, Sri Lanka, Nepal, Bangladesh, and Bhutan and in small numbers in Pakistan. The Axis Deer has been introduced to Australia, The United States, South America and even into Croatia. Surprisingly there are two subspecies of Axis Deer:

Axis Deer are primarily grazers and feed on short, sprouting grasses; however they will also browse as well on forbs, fruit and branches of trees. Axis deer have a protracted breeding season due in part to the tropical climate and births can occur throughout the year. Males do not have their antler cycles in synchrony as there are some antlers dominant over those in velvet or those without antlers. Stags commonly bellow during the rut! Axis does have three week long estrous cycles and courtship is based on tending bonds. A Stag will follow and guard a doe in estrous and surprisingly, during this time the stag will not eat. An Axis pair will do several bouts of chasing and mutual licking before breeding.

It was the third week of July, the rut was going full blast on the Baker 3 Ranch. I had visited with Bonnie and Robbie the Ranch owners who had advised me that this would be a great week to come and bow hunt for a good stag. When we arrived it was brutally hot, you know that kind of summer heat when it’s a glaring white heat, with 70 % humidity! The kind of heat that when you walk outside, you immediately start to wilt. I’m sure many of you readers know exactly what I’m talking about. Hey this is Texas and we can hunt year round, in spite of the heat. The Axis rut was going full speed and I couldn’t wait to hit the road to the Baker 3 Ranch.

The first evening, July 18th , was really uneventful. I had already unpacked, my bow was ready to go so I decided to go out for a ride with our guides Trey Paul Meeks and Jose Alonso. They were really pumped to have a bow hunter and TV Crew in camp! Both of these guides are excellent bowhunters themselves and understand what we as bowhunters need to get our job done! The ride was spent driving around the ranch looking for rutting Axis Bucks and we sure heard plenty of roaring. We then went to a cut Sudax field set up a blind where we saw lots of Whitetail bucks and does but no Axis showed, which really surprised both Trey and Jose.

The next morning was miserably hot and humid, but we saw so many turkeys it looked like a turkey farm. It got really exciting when a red tail hawk swooped down on one of the young pouts. He missed and the flock split up faster than you could bat your eyes. Like the day before, we heard a huge amount of Axis stags roaring but nothing came into sight! That afternoon was the same, lots of roaring and lots of does but no stags in sight. That night over a meal of roasted chicken and all of the trimmings I told Trey and Jose tomorrow me and my cameraman were going to hunt the Axis Stags the same way you hunt Elk, out early and go to the Roaring Stags!.

Day 3 was one of those mornings you dream about, Axis Stags were roaring in every direction plus it was cool with low humidity. I knew where there was a water trough, as this is a working ranch and they do have cattle on the ranch. Working down through a dry creek bed we found all kinds of scrapes and rubs! We were ‘still hunting’ and glassing exactly like hunting bull elk and everywhere we looked we could see Axis Stags were roaring and chasing does, it was exciting!

We finally worked our way to within 60 yards between a Stag and his herd but a whitetail doe we didn’t see bedded down jumped up and ran right into the herd of axis does with alarm barks going off in every direction. Our monster Axis Stag was like Houdini and just disappeared! Well that hunt was over so we pulled out to return home after setting up another hunt date. Before we left Trey, Jose and I set up a ground blind close by.

October 3rd we returned to Baker 3 Ranch. Looking at the photos from our Spypoint Camera we had proof that some excellent Axis stags had been visiting the feeding area.

The first day in our Rhino blind and we didn’t have to wait long for action. Within the hour we had all kinds of coming into the feeding area. That afternoon was a steady line of animals, Whitetail deer, Axis deer, blackbucks and muflon rams coming into the feeding area. The rancher had set out a big round bale of hay and that was a huge draw. Well, let me tell you those Axis were not easily fooled. They constantly had their eyes on our blind. Just before dark we had a monster 3 X 3 Axis Stage start working his way into the area. There was a large number of does in the area feeding and he was constantly going from doe to doe scent checking for a hot receptive doe. Then, just as the daylight was beginning to fade I had the golden opportunity I had been waiting for. That big old bleached out stag turned and gave me the shot I needed. Glancing at my cameraman and see he was locked in and ready I drew my Mathews Helim back, settled my 25 yard pin on the kill zone, steadied the shot and touched off the release.

I watched the arrow as it left on the right trajectory and heard a loud smack as it disappeared in the stag’s side! The stag threw out his back legs and was gone along with every other animal in the area. I waited for about 10 minutes and then we walked over to where my shot had connected. I found a few drops of blood and after a few more steps in the direction the stag had taken I found more blood. By this time the sun had set and it was pitch black. I told my cameraman we were going to back off. We returned to the camp house. I put the footage on the big screen TV and knew immediately that this Axis stag was history. We all decided it would be best to let it lie down and expire and we would regain the search at first light.

October 4th, we went out just as the sun broke over the horizon and after a brief search found my free ranging trophy within 75 yards of where I had shot him. The Grim Reaper Mathews Edition broadhead had taken the heart.

What a thrill hunting Axis stags in the hill country of Texas. If you’re ever interested in hunting Free Ranging Axis stags be sure to call or email Bonnie for details. I would suggest late March and April for a combo hunt for Axis stags and Rio Grande gobblers or May, June, July, August for Axis Stags and hogs, another great combo hunt! Let me tell you this is a tough hunt but very rewarding.