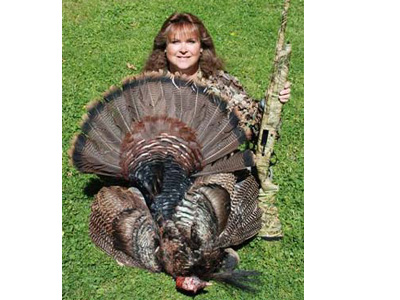 Winter this year seems to want to hold on forever. A few warm days then back to snow and cold. Finally the trees are starting to bud, flowers are slowly starting to bloom and turkey season opened April 13th.

I know that I am not the only one that suffers from turkey fever. Many of us are cursed with this affliction and we have learned to deal with it thanks to our favorite turkey hunting location and the patience and encouragement from our family and friends.

Up at 5 am and off to my Gorilla Undercover ACS blind for some turkey therapy, I drive to my location and wonder how this day would play out. Turkey season has been open for almost two weeks and I have had some close encounters but not shots taken. It has been a little slow but I have called in turkey’s everyday so no complaint there.

Everyday I call in the same two jakes and numerous hens, they are amusing to watch but the boss gobble comes to within 70 yards or so and Loose Lola calls him away, she sounds sweeter than I do apparently.

The morning temps have been in the 30’s and 40’s so the ThermaCELL Heated Insoles in my Danner Pronghorn boots have been the trick to keeping me comfortable while waiting on ole Mr. Long beard to show himself.

Arriving at my destination it was just getting daylight and the turkeys were coming off the roost. I quickly gathered my gear and headed quietly to the blind. I had my Weatherby SA-08 in position and my box call and diaphragm were ready to spring into action. I slid on my Real Tree camo head net and gloves to complete my Real Tree leafy outfit and I hit the box call.

I purred and cackled again and the answer was double and triple gobbles from in front, behind me and way off to my left. After about 15 minutes of intense turkey conversation the woods went silent. Had I pushed my luck and been too aggressive? I waited several minutes and decided to purr one more time, the answer came but they had moved further away and only the turkeys from behind me answered this time. So I decided to play hard to get and was quiet.

I sat there and listened as a donkey brayed in the distance and was answered by the thunder chickens, they were getting closer, so I waited for what seemed like an eternity and softly clucked on my diaphragm. There were coming, who would it be today? I was sure my jakes would be in the mix but I was hoping they would bring their Granddad with them.

Where I hunt there is a beautiful white hen we have been seeing for several years, the tips of her feathers are colored and she is something to behold. She does not have a beard so she is not legal to shoot and apparently she is sterile due to the fact we have never seen her with a brood of her own. I had not seen her during turkey season this year and wondered if she was still alive and well.

As I sat there anxiously trying to be calm and not overly aggressive on the calls I caught something out of the corner of my eye to the left. It was white hen and two of her girl friends. I slowly put the Weatherby up to my shoulder just in case they had Big Tom in tow. As they slowly came into range close behind were my two jakes and a bearded hen, which is always tempting to harvest.

They were all silent and so was I. As the band of turkeys walked their procession white hen popped her head up and looked behind her at the others, she clucked and walked just out of sight of my blind. I didn’t dare move I just kept watching to my left. Another hen came into view and then a huge black ball of feathers right behind her. WOW! It was the man or a jake on steroids. He had his tail feathers in full fan and they were all even, this was not a jake. He was really putting on show for me, walking sideways dragging his wings, he was in fully display. As he came closer I was beginning to think he was not going to turn, he was going to be in my lap or just tap dance on by and not give me a shot. They say turkey’s can’t smell but I never take any chances. I always use my full line of Wildlife Scent Killer Products just in case of close encounters.

He pranced and strutted and turkey fever was slowly setting in. I could feel my heart rate go up and my breathing was getting a little abnormal. Ugh, gotta calm down, gotta get it under control.

Usually when I hunt I am cool as a cucumber until I make the shot and then I fall to pieces but with turkeys it’s different. I have to work hard to keep it under control and I was not doing to well this morning.

Finally he turned sideways and his head was lit up like a Christmas tree, and oh yes he had a nice long beard. Here was the moment of truth he was 10 yards from me. I slowly put the bead on the base of his neck and told myself, squeeze, squeeze that trigger nice and easy. As the primer was ignited the 3″ magnum Winchester shell, I think my heart stopped. It seemed like time stood still. When the shot finally reached him he hit the ground. There was turkey pandemonium for a few seconds the rest of the flock could not get out of Dodge fast enough.

I was a wreck; I was shaking so hard I could not walk. Like most turkey’s after the shot he moved a little and I was trying to get out of the blind to get to him. It was a shame someone did not have a camera because the footage would have won the money. Since when do the doors on blinds shrink after you get in them? Why won’t my legs hold me up? Why does my Weatherby weight 60 lbs? Geez get it together!

Finally I get out of the blind and make it to ole tom. He had expired and the sun was glowing off of his magnificent feathers. He was mine, my largest turkey to date. He weighted 22 lbs, had an 11″ beard and 1 3/8 ” spurs. What a bird!

There are two weeks left in the season and I know that I will need a lot more turkey therapy to help with my condition. I will have my Mathews Z-7 Magnum in my hand for the remainder of the season to see if it will help me gain control of my addiction. I have never harvested a turkey with my bow so hopefully this season will be the one where I can make this dream become reality. For today all that is left is to get out the Outdoor Edge SwingBabe and Processing Kit so we can make Tom the main attraction at the dinner table in the near future.

For all of you that suffer from turkey addiction I wish you luck on getting it under control but like myself I hope you are never cured. Good Luck!!

Archery “Deep in the heart of Texas.”

Archery "Deep in the heart of Texas."