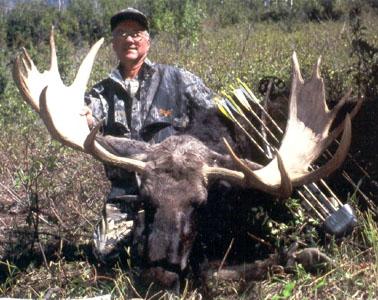 Moose numbers have dropped in parts of the country, and in some areas that decrease has been significant. Hunting outfitters near the Grand Tetons in Wyoming, and others in Montana and Idaho, have been quick to blame wolves for the problem. And there is no question that wolf predation does impact moose in some areas.

However, at the recent Pope and Young Convention in Dallas, Dr. Shane Mahoney from Newfoundland gave a great talk on the history of woodland caribou in his home Province. Now wolves have nothing to do with woodland caribou in Newfoundland, but when caribou numbers there dropped rather significantly in recent years, I was one of the many that blamed coyotes. Black bears have also been blamed for calf mortality there. Dr. Mahoney’s excellent summary of the whole history of what has been going on there for almost 100 years changed my thinking. He noted that the ecology of a species (be it caribou or moose or whatever) is quite complex, and jumping to the conclusion that one factor (i.e. wolves, or coyotes, or habitat decline, or climate change) is to blame, will usually be a shallow answer to a complex problem that was probably caused by several factors rather than one.

Consider the moose situation in Minnesota. Moose numbers have dropped significantly since 2005, and those declines reached a point where the state wildlife agency cancelled all moose hunting for 2013 and probably into the future for several years. They want to find out what is causing the decline. They already know it isn’t legal hunting because very few moose are harvested there in any one year, and that harvest has been low for many years.

So, they’ve set up some long-term studies to try to find answer. Some preliminary results of a radio-collar study of moose calves is a start on finding out what is happening in Minnesota. In early May researchers collared 49 moose calves. While doing so they discovered that 58 percent of cows that had calves born in May, had twins. That is way above the normal 30 percent, and may have been precipitated by a mild 2012 winter, which allowed the cows to be in good physical condition. Anyway, the discovery of this fact is interesting. But the mortality the researchers discovered early on is rather alarming.

Two-three weeks after tagging, 22 of the 49 moose calves were dead. That is a bit high, and may indicate a problem, but it is too soon to know. If the rest of these calves survive till hunting season, then the initial cause for alarm will dissipate. And although many want to blame the wolf for this mortality on calves, researchers in Minnesota do not believe that wolves are the major problem. Many other biologists feel the same. For example, a study just published on moose calf mortality in Ontario looked at calf mortality in a park where there was no hunting, compared to an adjacent area where there was hunting. Annual survival was 56 percent in the hunted area and 72 percent in the protected area. The highest cause of mortality was wolves and black bears, but this predation took place mostly in the protected (non hunting) area. Interesting. When they looked at the overall calf survival on both areas, they rated it as good to high and they also concluded that predator control nor restrictions on hunting calves was not warranted.

Then we have diseases. Brainworm, common in deer, affects moose and can lead to death. Poor body condition can lead to calf mortality too. Now what causes a calf to have poorer body condition? It could be a number of things, from the health of the mother, to habitat, to weather, to parasites, to being chased by predators, etc., etc.

Like Shane Mahoney said, attributing lower numbers of a wildlife species to just one factor is probably a big mistake. Ecology is complicated and when bad stuff happens, the answers and solutions are probably just as complicated.

I still believe that in some western areas, wolves are a major problem for elk and moose. But in other areas, although wolves probably take some calves, there are other factors that are also part of the puzzle. Now, once known, what can be done to help moose? Some things such as temperature are out of our control. Disease problems are also out of our control, at least for the most part. We can control wolf numbers via management, and I am all for some further wolf management. And we can control hunting as well, and this is what happened in Minnesota. Probably a good move in that situation.

The point of this article is to note that some of these management issues are complicated. Rather than jump all over the Minnesota wildlife agency for shutting down moose hunting, we need to support our state agencies. Because wildlife ecology and management is complex, the solutions are not always simple, even though you think they are.

And to stay hidden from the game you hunt to the maximum be sure and check out HECS The Evolution of Concealment and Atsko Products. Make your hunting time count with HECS and Atsko

Scouting For Deer Begins For 2013