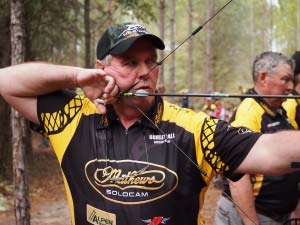 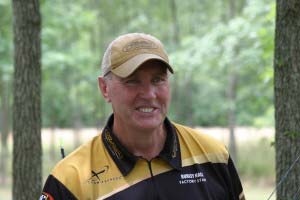 Editor’s Note: Burley Hall of Kendallville, Indiana, one of the nation’s leading 3D archers and bowhunters, has won 38-national tournament archery titles and six IBO World’s Championships in 3D archery. One of the key ingredients to Hall’s success in tournament archery and as a bowhunter is being able to see clearly.

Question: Why and how do you use Alpen Optics when you shoot tournament archery? 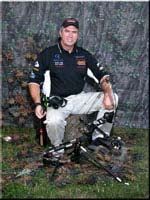 Hall: My Alpen binoculars light-up the life-size 3D archery targets that I shoot better than any optics I’ve ever previously used. The 12- and the 11-rings are the two highest-scoring and smallest rings on a 3D archery target. Many times, those rings are so small that you really can’t see them very well with the naked eye, or from the distance we’re shooting, especially if the target’s in the shade.

However, by using Alpen Optics, I can get a clear picture of these small rings before I shoot. I can see exactly where the rings are on the target, and where they are in relationship to other visual cues. Then I can aim more accurately and get the highest score I can shoot.

Question: Once you use your Alpen binoculars to identify the 12- and the 11-ring, how do you aim your bow? 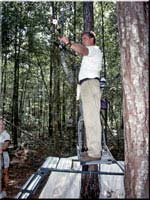 can’t see the rings from the designated spot where I’m shooting.

When we’re reference shooting, we pick a line or a curve on the target or a body part that’s close to the 11th or the 12th ring. Then that’s where we aim.

If I’m 2nd or 3rd in a particular flight of shooters, I can see where the other archers’ arrows have hit and decide how far their arrows are from the 12-ring. Then I take my aim off the positions of the other shooters’ arrows.

For instance, when I come to the line prepared to shoot and one or two arrows already are in the target, I use my Alpen binoculars to identify the 12-ring. I’ll study the arrow closest to it. If that arrow is maybe 3 inches from the center of the 12-ring and slightly to the right, I aim a little to the left of that arrow to center the 12-ring.

Question: Which Alpen binoculars do you like the best?

Hall: I like the 8.5×50 Apex, and I’ve also been testing the 8×42 Rainier. Both of these binoculars are extremely clear and bright and have great definition. These binoculars really prove their worth when we’re shooting a target that’s in a 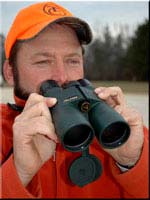 shaded hole or hard to see.

In these situations, a dependable pair of binoculars is critical for the archer to be able to identify the target, pick out the rings he wants to shoot and shoot accurately. The average 3-D course has a lot of what I call dark holes, where the targets are hard to see, and the rings on the target are even more difficult to identify.

With the naked eye, there’s often no way you can see those rings. But with my Alpen binoculars, I can see every line on the target and identify the reference points I need to shoot accurately.

Question: Burley, in tournament archery, 1-inch, or even one-half-inch, can make the difference in winning or losing a tournament. Once you’ve identified the target you want to shoot, how do you hold the bow steady enough to deliver the arrow accurately?

Hall: Tons of practice. Practice develops muscle memory. Then the muscles remember how to hold steady and anchor the bow. By doing an excessive amount of shooting, you can develop the muscle memory required to hold the bow steady enough to shoot accurately. There are no shortcuts to being an effective and competitive shooter. Hours of practice are the key.

Hall: Oh, you bet. I use my same 8.5×50 Apex binoculars when I’m hunting deer as I do when I’m shooting tournament archery.

Question: How do you use your binoculars for deer hunting?

Hall: The sport of 3D archery was developed to simulate deer-hunting situations for the archer. Even when deer season 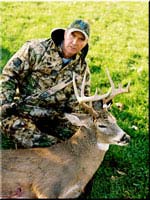 is closed, a bowhunter can practice shooting at deer-sized targets in situations similar to those he’ll encounter in the woods. Therefore, I use my binoculars during deer season exactly like I do in an archery tournament.

If a deer is standing in the brush, in the timber or down in a dark hole, I use my Apex binoculars to evaluate the buck’s rack size, pick the spot I want to shoot on the buck and look for the reference points to aim off, just like I do when I’m shooting in tournaments. I’ve found that in the woods, when I’m hunting, these Apex binoculars are the best I’ve ever used.

Question: Burley, how far from a target can you move and maintain accuracy when you’re hunting with a bow?

Hall: I can comfortably shoot as far out as 60 yards. I’m constantly practicing at all the distances from 60 yards, not only during deer season, but also in tournament archery shooting after the season ends.

One key ingredient to shooting accurately at long distances is the level of confidence you have in making shots greater than 30 yards. The way to develop that confidence is to shoot thousands of arrows all year long. I don’t advocate long-range shooting for everyone. Instead, I suggest that you only take shots at those deer that are within the ranges you know you can shoot accurately.

Remember, tournament archers often can shoot accurately out to 100 yards because they practice at those distances. For instance, at a recent indoor tournament in Pittsburgh, Pennsylvania, in early 2007, Jeff Hopkins, one of the nation’s top pros, only had three arrows outside of a 3-inch circle at ranges of 40, 50 and 60-yards after shooting 120 arrows. When you can shoot that accurately at those ranges, you feel comfortable taking a shot at a deer at those distances.

Many times, when you’re bowhunting and you make a hit on a deer, he may run and stop to look back at distances of 50 yards or more. If you can make those long-range shots, you often can get a second arrow into the deer and help put him down quicker than if you can’t make those long-range shots, especially if you’re shooting a quiet bow. If everything’s perfect, you can make a shot at 60, 70, or 80 yards, and you’ve held the sighting pin exactly where you need to hold it to make the shot, there’s no difference in making a long-range shot and making a 20-yard shot.

Question: How much more effective are you as a deer hunter because you shoot 3D archery after deer season?

Hall: Before I started shooting 3D archery, I’d pick up my bow one week before deer season and start practice shooting to get ready for the season. I didn’t have nearly as much ability to shoot accurately as I do now.

I think that shooting 3D archery gives the bowhunter at least 50% to 75% increased accuracy and a greater ability to take a deer with a bow than if he or she doesn’t shoot 3D archery.

Hall: I shoot a Mathews Conquest 4 when I’m competing in tournaments, and I shoot a Mathews Drenalin when I’m bowhunting because it’s a shorter and more-maneuverable bow and much faster than my tournament bow. Although I switch bows when I change from tournament season to hunting season, I never change the optics I use. Being able to see clearly is just as important in bowhunting as it is in 3D archery.

However, today, I say that Alpen binoculars are the best optic period. I can’t get the same clarity that I get from my Alpen binoculars, which I must have for my competition shooting and my deer hunting, from any other binoculars. 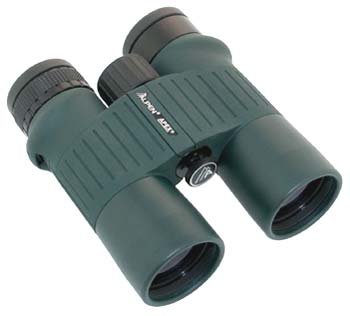 Want to bring your world into focus? Be sure and go here and see it right: Alpen Optics