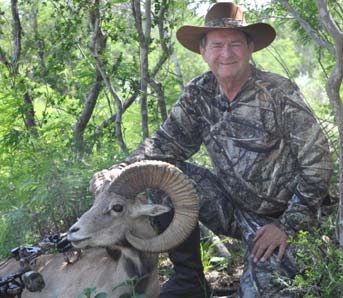 Author with his trophy ram.

This was to be our first day of hunting at Inflight Outfitters,  a first class operation. Of Course we arrived late in the afternoon due to WAY TOO many stops on our way. But we finally arrived around 4:30 pm. After all of the manly hugs, back patting and hand shaking, David suggested that we get ready for the evening hunt. I was ready to go within 15 minutes and after shooting a couple of arrows into my Hips Target we were on our way to a blind. This blind had been set up a couple of weeks in advance so the animals would be used to it.

As we approached the blind we saw several wildebeest and blackbuck. As we crawled in the first thing that hit me was how miserably hot it was. Lots of wind but not much coming into the blind which made it worse. Within 30 minutes we saw several whitetail bucks start to feed out into the Guajillo flats.  Guajillo is an acacia spreading shrub that puts out many stems from the base. This plant is abundant on the limestone and caliche cuestas of the Rio Grande Plains, Trans Pecos and southern Edwards plateau. It is browsed by cattle and whitetailed deer but is poisonous to sheep and goats when eaten for prolonged periods. The leaves have a crude protein content of about 20 percent and is also an important source of nectar for honey production.

After the whitetails came the blackbuck and they were feeding on a flat moving toward us with several rams of various lineage.  It was great to watch the different species of animals moving and took our minds off of the heat. About 7:00 pm we spotted two really great Nubian Ibex and after what seemed to be an eternity they too came to the waterhole. The camera was running and I ranged the largest Ibex, sporting over 34 inches of main beam on those beautiful scimitar shaped horns, at 25 yards. That monster gave me every opportunity to put an arrow through the boiler room but for some reason I didn’t take the shot. I have no idea why as I’ve always wanted a great Nubian Ibex. Apparently I had a real bad case of brain freeze. Whatever the reason I didn’t take the shot and I will forever regret not doing so. We returned to the lodge and had a great meal and lots of laughs over how one person can let a trophy Ibex walk.  Oh well, tomorrow was another day.

The next morning we were up and moving at 4:30 pm after a couple of cups of “Natures Coffee Kettle” 100 % Colombian. The coffee was great but the weather was not, it was pouring.  We finally gave up waiting for it to stop and just loaded up the truck and headed for the blind. We returned to the same blind and eventually it did let up and when it did,  the game started to move. First we had several Blackbuck  move out into the field and then came the rams but everything was way too far off. We sat till 9; 30 am when we called it quits.  Back to the lodge where a big breakfast awaited us. With bellies full we were ready to try another area. 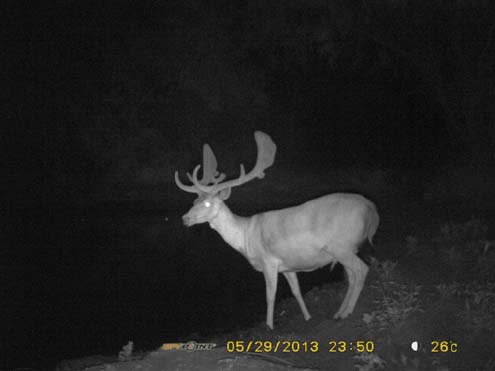 We traveled the pastures of this 10,000 acre estate and saw  Gemsbok, White Lipped Wildebeest, Nilgai, Impala, Axis deer, Aoudad, hogs and every kind of sheep and goat you could imagine. We finally settled at a waterhole and the activity around this tank was unbelievable. There was no place where you could not put your hand down without putting your hand on some animals track.

We constructed a natural blind in some of the thickest brush and sat down in 2 folding chairs next to a live Oak. Within 30 minutes after settling in I glanced over my right shoulder and there stood an Axis fawn, 3 Axis Doe and 2 Monster Axis bucks. They were looking at us 7 yards away and they wanted a drink of water. Finally, the fawn must have thought that Wayne was the ugliest thing he had ever seen and they took off back the way they had come. I was surprised as they did not give an alarm bark. Strange for Axis deer not to give an alarm bark when surprised.

We decided to move  to the opposite side of the waterhole and set up  for another ambush. We set up another natural blind and had been in this spot for only a few minutes when another monster Axis buck walked to within 5 yards of Wayne, who had his camera rolling.  It was incredible to watch this animal, his tongue hanging out from thirst, throw caution to the wind and start filling up with water. And it was just as incredible to watch his eyes when he realized he had gotten WAY TOO close to Wayne.  He turned inside out and was breaking brush for at least 100 yards getting out of there.

As we sat there we also saw a yellow headed blackbird, green jay, male painted bunting “one of the world’s most beautiful” taking a bath at the tank and black bellied whistling duck. All was quiet and the game putting on a show when we heard a feeder  that we were not aware of go off and of course we had to go to see what was there scarfing up the feed. It was about  6:00 pm and there were several sows and their shoats. We started to do a stalk and I  got to within 30 yards and the pigs scattered. Hard to stalk with a cameraman in tow.  So we returned to the tank. Just before dark we had 5 huge Gemsbok bulls come in but they hung out in the white sage about 40 yards giving me no good shot.  So with no opportunities, 2 days down and no arrows launched we went back to the lodge for a  great supper that included much political conversation, bowhunting and the quality of the animals on Inflight Outfitters ranch.

It was a late night and I was wishing I could find that rooster before he started crowing at 4:30 but I didn’t and he did. It was too soon time to get up and a final go at our last day of hunting.

We decided to return to the ground blind and it turned out to be a very entertaining morning. Like the day before, we had all kinds of birds around us with this one mockingbird doing all he could to drive us crazy with his constant singing. He also kept the game away as we did not see one big game animal. As the morning progressed I had visions of a Red Ryder BB Gun to put an end to bird’s continuous singing. The final insult from our resident mockingbird was when, sitting above our blind, he dropped a big load of whitewash. With pin point accuracy he let it fly right through the shooting window and splatted at our feet. OK, it was time to go.  I was  tired of sitting anyway and wanted to try one more attempt at stalking.

We would drive to a high ridge and glass for sheep and after the third stop we spotted a herd of four rams traveling together through a huge guajillo flat toward a caliche ridge with nothing but white sage.  I knew if those rams got into that sage we would never find them. My cameraman and I saddled up and were on the move to head off the rams. We lost sight of them for about 5 minutes and then saw the largest ram moving by himself.  It looked like he was going to try to find a cool spot to bed down. It was brutal, the heat was on temps in the mid 90’s and high humidity plus the wind was howling with gust over 30 mph. We were working our way along a sendero as the ram entered a huge a mixture of white sage, guajillo, frijolillo, granjeno & black brush, thick stuff.  The ram was well hidden but we had an interception point of about 30 yards.  We picked him up as he came out of the sendero so I gave a burp and he stopped. I had come to full draw and picked a spot when Wayne said, “Don’t shoot”. I wasn’t sure why but I held on target and waited.  Whatever the problem was Wayne resolved it and I got the go ahead. I settled the sight pin  on the kill zone and touched off the release.  The ram moved at the shot and the deadly Grave Digger broadhead went completely thru the hind legs.  At impact he lunged across the sendero and took off in a dead run.

We sat down and talked about the shot and what had happened. First thing I asked was why Wayne had called me off  the shot. Simple response, the camera had shut down. That was the first time in all of my years of hunting that had happened but I’m glad he called me off before I had taken the shot. My main concern though was the shot being farther back than I wanted.

The ram ran about a mile and every time he hit the ground there was a spray of blood. While not an ideal hit I knew it was a killing shot. The irony was that he had run right past the blind we had sat in for three days and died about 100 yards from it. The Grave Digger really did bail me out from a poor shot.

Summer hunting, is a great way to get rid of those summer time blues so if you’re looking for a summer hunt, Texas is the place to be and I invite you to check out Inflight Outfitters.  Plus it’s a great place to take your family on vacation.

For More go to: Mathew’s Minute

Taking Wildlife Photos Can Be Easy

Taking Wildlife Photos Can Be Easy