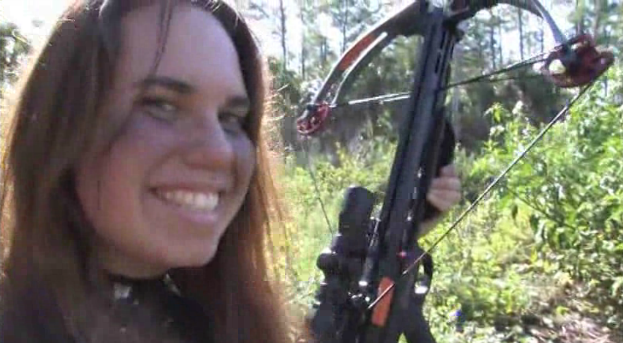 Candie Nolan raised her crossbow for the third time and centered the scope’s crosshairs on a hog and paused. She wasn’t after just any hog. She was looking for a bruiser with notable tusks.

The uninformed porker moseyed off into the palmetto and didn’t even know it almost had its ticket punched. Darkness moved in and the mosquitoes took over the throne. They would rule the night.

Florida has a zillion hogs. These pigs arrived with Florida’s first tourist, Ponce de Leon. Juan Ponce de Leon actually sailed with Chris Columbus on his second voyage and is said to be the first Italian to set foot on Florida. Like all of the explorers in 1493, they didn’t have canned Spam aboard…so they brought European boars with them for the pork. The pigs occasionally got loose and now you know the rest of the story. Florida is covered up with wild pigs. Wild pigs require an occasional arrow and that is what brought Candi and her crossbow to this patch of wilderness on the edge of the Big Cypress Swamp just north of the Everglades.

Hogs are not easy to stop with an arrow. Shots need to be well placed and broadheads effective. This diagram is an excellent depiction of where the money shot is located. Contrary to the belief of almost every bowhunter the best shot is not behind the shoulder, it is directly above the front leg. There is a magic rear pointing “V” there that hosts all of the vital organs. Those who tell you to shoot behind the front leg and in the center of the animal are wrong. Deer are built from the same blue print. Always aim straight above the front leg at the orange dot.

Hogs roam about this part of the Florida swamp with three major predators. First, the alligators here enjoy pork and the pigs drink fresh water daily. This puts them in jeopardy and on the menu. Another predator is the Florida Panther. A bit smaller than the western cougar, their Sunshine State cousin is fond of pork. The third predator wears camo and hunts them with dogs, arrows and bullets. They tread in a dangerous world.

The Florida hogs have one thing going for them that is hard to overcome. They have a nose that rivals that of a whitetail. It may seem like crass advertizing but this stuff really works and you should know about it. Candie used a combination of Sport-Wash detergent to wash her camo and the same hair and body soap to wash in plus sprayed down with O-D-O-R Oxidizer from Atsko Products before the hunt. You can buy it in a three pack and be all set up.

Candie got her shot after slipping along swamp trails in the early morning. The hog, a big boar with real chompers, was up-wind of her and fed along without knowing there was a lethal woman lurking in the palmettos. The shot offered only a brief window. She pulled the shot forward and to the left totally missing the vitals. But, and this is an important but, she was shooting a Swhacker broadhead and the extra wide scissoring blades ripped through the base of the hogs neck and slit the jugular.

TO WATCH THE ACTION: SWAMP GIRL

The big mechanical Swhacker offered something I call broadhead forgiveness. The truth is a lesser broadhead may have missed the finger-sized jugular. The Swhackers often make the difference between “Hit and lost” and freezer wrap. We bowhunters can often use a little forgiveness.

Make sure you put ’em down quick: Swhacker Broadheads

And to make sure the game doesn’t wind you, go to : Atsko Products

For more from Wade go to : Wade Nolan