by Gary Elliott
in Bowhunting Gear
0 0
A A
0 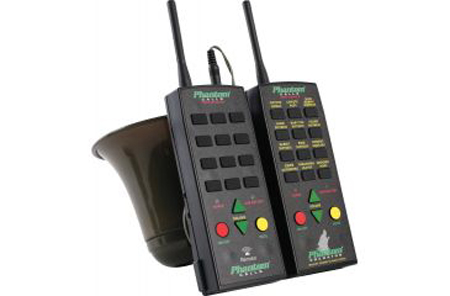 Tagged “The Phantom Pro-Series is the flagship in our line of digital calls” and priced just under $300.00 these calls may be purchased as a wired or wireless system with remote transmitter, a 200 yard range, 2 long range antennas, remote receiver module and an extra detachable belt clip.

With even more features such as; interchangeable Sound Modules. Or, choose from the full-line of Sound Modules including Whitetail, Predator, Predator 2, African Predator, Gobbler, Moose, Elk, Bear, Honker and our new Duck-Goose Combo sound module.

Ken Head a veteran coyote hunter and field staff for GarysBowhunting gave this call a work out. This units wireless remote worked very well. Although rated up to 200 yards between the speaker and the remote. I was only able to test it out to about 50-60 yards as that is the distance I normally use when calling predators and it worked flawlessly. It was easy to use and responded well when sounds were turned on/off or altered.

I especially liked the fact that the user can employ two sounds at the same time, for example, using the rabbit distress and crow gathering simultaneously. In my experience I’ve always felt that if the hunter uses more than one media (call and decoy, or two calls) there is a better chance of fooling a wary predator. There is plenty of volume available to call in predators from as much as a half mile to a mile away depending on amount of wind that day. The Phantom Pro is fairly light to carry and is compact enough to easily fit in the backpack I use for carrying gear out to the areas I want to set up and hunt.

Even with all of this there is more such as, complete instructions and manual, 60’ of speaker wire should you want to go wired, ABS, all-weather 15 watt speaker.

So if you are in the market for a great Pro-Series game call check out Phantom Calls and also check out their other electronic game calls price less and more. For more go to: www.phantomcalls.com